The Steelers don't pick running backs in the first round very often.  In fact, in the last 60 years, it has happened  only 11 times. With 7 of those 11, it has turned out to be absolute disaster (not including Mendenhall, who ran into disaster of his own with a broken shoulder).  Only Franco Harris (72) and Lynn Chandnois (50) panned out.  The two Baylor guys, Walter Abercrombie (82) and Greg Hawthorne (79) are the next closest things to success.  The rest never got off the ground, except Tim Worley (89) who flew high (if you know what I mean).

In 1956, the Steelers took Art Davis with the 5th overall pick of the draft, passing on Penn State's Lenny Moore (ouch).  We can't blame Davis for being hurt coming onto the team, nor medicine at the time for not being advanced enough to foresee the disaster.  Art Davis is a wonderful man now living in Oregon who took time to recall that 1956 season.  Here goes.

Art Davis was an All-American halfback at Mississippi State University.  In 1954 the Atlanta Constitution selected him as the Southeastern Conference's best running back, second best defensive back and Most Valuable Player.  In 1955 he played in all the postseason all-star games.  Look Magazine named him the National Collegiate Player-of-the-Year. 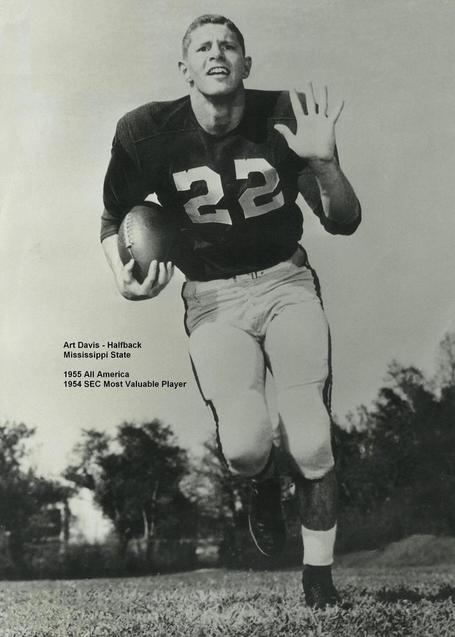 Look Magazine, the nation's premier periodical at the time, flew Davis to New York City in December of 1955 for an appearance on the Jackie Gleason Show, the nation's premier entertainment program.  Before he knew what hit him, Davis was being photographed with a young, hot Kim Novak for her popular movie "Picnic."  He was not only big man on campus, he big man in the country. 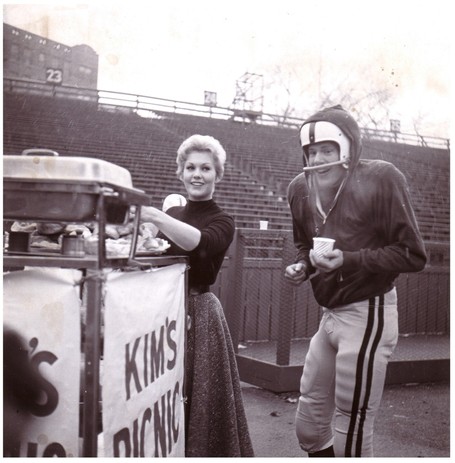 With the fifth overall pick of the 1956 NFL draft, the Steelers called his name.  The draft had no fanfare back then.  There was no television or radio coverage.

"I had no idea the draft was being held," admitted Davis.  "I got a phone call later that day or maybe the next day."

The Steelers took Davis at the insistence of Head Coach Walt Keisling even though Lenny Moore was still on the board.  Moore was a Penn State player who the Steelers had first-hand knowledge of, and who ended up as a Hall of Fame halfback for the Baltimore Colts (drafted number nine).  Davis, on the other hand, hurt his knee during his senior year at Mississippi State, but played through it.  He still played well enough to rack up numerous awards.

"I thought for sure my knee would get better during the offseason," lamented Davis, "but it just got worse."  By the time I got to training camp I couldn't cut or run with any burst.  I felt terrible.  The Steelers took me with the fifth pick in the entire draft and I couldn't help them.  My knee kept getting worse."

Davis spent most of the 1956 season on the sidelines.  He saw up-close the play that ended Lowell Perry's career.

"It was terrible," he remembered.  "Lowell was a great player.  He was as fluid and graceful and gifted as any player I ever saw.  He was Lynn Swann before Lynn Swann."

Davis ended the 1956 season with 15 total yards, six rushing and nine receiving.  After the season the Steelers scheduled an operation.

"There were no fancy machines in those days," claimed Davis.  "Once they cut my knee open they found cartilage damage and cruciate ligament damage.  They tried to fix it, but it was either too late or too damaged.  I could never play football again."

Ironically, Davis spent two weeks in Mercy Hospital for the knee operation, the very hospital in which Lowell Perry was also recuperating.  They commiserated together.  They were two great players the Steelers were counting on and neither played again after leaving Mercy Hospital.

"I have nothing bad to say about Walt Keisling," said Davis.  "I was the one who let him down.  I just couldn't play.  Maybe if I had today's medical treatment things would have turned out differently."

Then again, those were the days when nothing could go right for the Pittsburgh Steelers.  It wasn't you, Art.  There was a fellow named Murphy who had this law about things going wrong if they possibly could.  I never knew who Murphy was, but I am convinced he had to be a Pittsburgh Steelers' fan from the old days.