To The Water Cooler We Go: Steelers Gab Amongst Friends

Share All sharing options for: To The Water Cooler We Go: Steelers Gab Amongst Friends

Writing year round about the same subject has its challenges, particularly when you're not equipped with a press credential. So I'll take a shortcut here and copy and paste a instant message conversation with long-time reader TheMost ViolentTeam. Check out his series on How the Steelers Defense Works (Parts 1, 2, and 3) for an informative read. With TMVT about set to embark on his officer training for the US Navy SEALS, I thought I'd take advantage of his last bit of spare time to kill at work and talk about our favorite subject, the Steelers. As always, feel free to email at behindthesteelcurtain@gmail.com me with any questions, complaints, whatever, or just to say what's up. That's how TMVT and I 'met', and we now enjoy frequent correspondence as part of our normal routine.

TMVT: I'm really pumped for the JAX game man. It's a great chance to show our mettle and resiliency even more.  I have a great feeling we romp this weekend.

TMVT: I just think we got a really mentally tough team.  Ben said it after the game: "we will never quit." People have reasons to be concerned, but we did just win a division game on the road without our top 3 RBs and a starter on the O Line.

Blitz:  Maybe it's time we start viewing this team as a defensive team.  You know like the Ravens of 2000 or the Bears teams of recent years where the hope is that the offense can do enough and let the D take care of the rest. I know we talked all summer about how many 'weapons Ben had at his disposal' but it looks as if the true strength of this team is the defense, yet very few of us are fixating on that positive and instead are just pissed that our offense has sputtered the past three weeks.

TMVT:  I was thinking the same. The problem is I think our offense is just out of sync right now.  It can be a lot better than '00 Ravens but I agree with the core of what you're saying. We are mostly a defensive team and that's not at all a bad thing. I gotta say, I'm concerned about giving the D a rest throughout the game. That might be why we're hesitant about going no-huddle too often, because it puts your D on the field a lot. I think we should just use the no-huddle a couple of times a game, to mix things up, but to still not expose our defense too much.

Blitz: I guess, but I think you may be associating the no-huddle with the hurry-up. I think there's a way to use it without racing up and down the field (hopefully). Furthermore, the no-huddle would put our D on the field no more than not using it if we're just going to go 3 and out and get sacked all the time.

Blitz: Anyway, we'll see how much, if any, we use it against Jacksonville. I'm not a huge fan of the Dookie signing. You?

TMVT: He won't play much anyway.

Blitz: Not this week, I'd guess. Agreed.

TMVT: Back to the no-huddle real quick. I still think we have the tools to be a successful offense without the no huddle. With better play calling, of course.

Blitz: Agree. We have the QB and the play makers.

TMVT: We have the tools to run any offensive system. We can do a little bit of power running. We can do cutback/zone running, deep play action pass, intermediate passing, and short routes. We just haven't found any continuity or identity at all on offense so it's hard to say what we can or can't do.

Blitz: Agreed, we still have plenty of time to figure it all out but I gotta say, we have to first find SOMETHING that works consistently before we can diversify and expand our offensive repertoire. I think, for now at least, our best bet at that is with the no-huddle.

Blitz: One thing I've been wanting to write about is the importance of peaking at the right time. At this time last year the injury bug had not yet hit us, the offensive line was shaky, but not nearly as bad as it was towards the end of the year, etc. Maybe this tough stretch is exactly the kick in the pants we need to truly address some of the internal issues that will keep us from being a SB caliber team.

TMVT: True that. We'll have to grind out a win this week, but we can do it convincingly anyways I think.

Blitz: I dunno. I'm concerned about the D this week. It's a short week, Monday was a physically taxing game, and the Jaguars are getting some rhythm on offense the last couple of weeks.  I do think we'll score some points though.

TMVT: It'd sure help if we put up some points early. I think the D is veteran/smart/badass enough to not have a letdown.

Blitz: Woodley and James Harrison are just beastial. So f'n good together. One great pass rusher can be dealt with. Two makes things so much more difficult for an offensive line to deal with.

TMVT: Oh man. I was watching Wood all night.  He got more double teams than Harrison i think. One play early in the game, he got faced a Tackle and a RB, and still spun to the inside and caused slight pressure.  Those guys are incredible man. Best OLB duo since Porter & Gildon in early 2000s.

Blitz: They're better than them imo. Woodley's still got a little bit to learn in the passing game compared to a guy like Porter, but he'll get there. 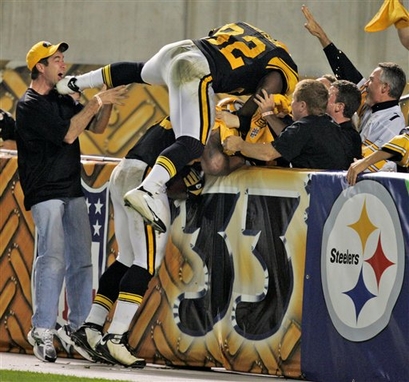 Blitz: Woodley may turn out to be amazing. As in like one of our All-time great type legends that we'll applaud in 25 years during the team's 100th anniversary celebration.

TMVT: 100% agree.  Playing with Harrison will only make him better, because he tries to mimic the intensity harrison does. Perfect environment.

Blitz: Harrison is so ferocious. That was awesome watching him crush Woodley as they jumped into the stands after that TD. I'd be so scared if he was dating my daughter.

Blitz: You think we'll resign him?

TMVT: Yeah, I do. I do think Woodley is definitley better.  He's faced better opposition so far  and he does well against Pro Bowl tackles (John Runyan) whereas Harrison seems to get his sacks in bunches on average to below average tackles.  He doesn't get manhnadle by Pro Bowlers or anything, but he doesn't seem to dominate them.

Blitz: Harrison does seem to be a feast or famine type player.

Blitz: Woodley has an INT, right?

Blitz:  Man, in just four games he has 3.5 sacks, a forced fumble, a fumble recovery for a TD, an INT and solid tackle numbers (17). Pro Bowl is not out of the question I dont think.

TMVT: Yup both him and Harrison are well on their way.

Blitz: I dont think both would make it, and Woodley's diverse statistical accomplishments i think would give him the edge if both were to continue more or less at the same pace.

TMVT: If they end up with similar stats Harrison will get the vote probably because of his reputation. Helps that he's so huge on Monday NIght Football when everyone's watching.

Blitz:  I dunno, lots of national pundits are drooling over Woodley and I'm not sure that many outside of the 'Burgh know about Deebo.

TMVT: We'll see. I could see both making it.  Both are on pace for like 15 sacks.

Blitz: What did you think about Deshea's play?

TMVT: Eh, he obviously wasn't 100%  For some reason, i cant remember who Mason got most of his yards on?

Blitz: I think he was lined up against both BMac and Ike at varous points.

TMVT: Mason is very underrated though, one of the best in the game in YPA usually. Great route runner.

Blitz: I have no idea how he was able to continue making plays.. Flacco was looking his way the entire game yet still found a way to get open on us. Guess thats a testament to Flaccos strong arm and his route running as well, but i would have thought we'd have forced him to look elsewhere. 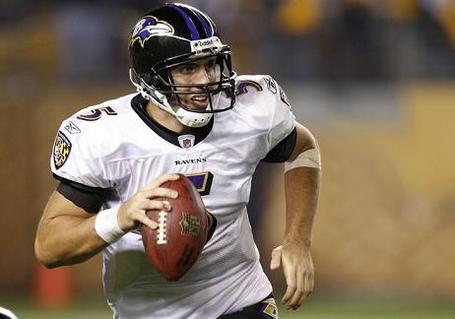 Blitz: How tired are you of losing to the fucking Jags?

TMVT: Very. Can't wait to change all that this weekend.