Maybe he's been distracted by all the success his college team Texas is having this past two weeks, but New York Giants CB Aaron Ross sure has been lit up recently. The 2nd year DB, whose improved play down the stretch played a big role in the Giants' improbable SB run, may just be going through one of those hard to explain tough stretches, but he also might have a legitimate weakness that opposing offenses are actively seeking to exploit. I wouldn't know really, I do not enjoy watching this team play at all. But let's still take a look at some of his recent struggles.

Two weeks ago at Cleveland, Ross frequently found himself lined up across from Braylon Edwards. On the evening, Edwards fininshed with 5 huge catches, and 2 TDs for 154 yards. Included in his exploits was a 70 yard bomb on Aaron Ross, and his 2nd TD, from 11 yards out, also was against Ross, who ultimately would not return after being injured on the scoring play. When you consider just how bad the Cleveland aerial attack has been all year, Ross' play has to be worrisome for Giants fans.

This past Sunday against the 49ers, Ross again was picked on. And believe me, it's tough to be picked on by a JT O'Sullivan led San Francisco offense. Things certainly were not as bad as they were the week before, but Giants secondary still surrendered 256 yards through the air on just 16 completions, and Ross was I believe the culprit on the 49ers lone offensive TD, a 30 yard pass and catch to Josh Morgan. 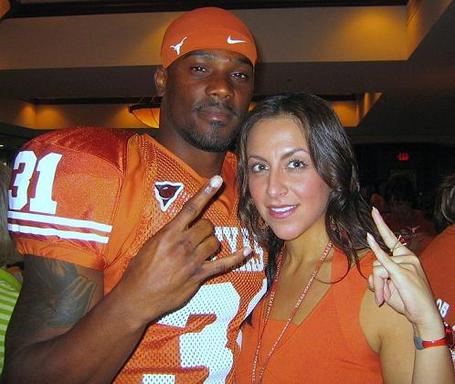 It hasn't been all fun and games for the former UT standout Aaron Ross lately.

Here's the one potential trap though. If we look at film and see how Ross has struggled, I'm worried we resort back to our earlier inclination to try to stretch the field too early and often. There will be a few plays to be had throughout the game, but we've got to focus on slowing down the Giants pass rush before any play-action or vertical passing can be expected to work, at least consistently. This game, which we'll be previewing throughout the week, has all sorts of nice and juicy sub-plots.  The Eli vs. Ben debate, our beleaguered but improving O-Line vs the Giants depleted but still lethal pass rush, as well as our need to stay within the framework of what's been working the past two weeks in the face of what I feel will be a strong temptation to try to excessively attack New York's young secondary. And oh yeah, these two teams have as much, if not more, history than any other franchises in the history of professional football. Should be fun.