If you are like me and love defense-oriented, smashmouth football, this weeks matchup between the Pittsburgh Steelers and the New York Giants should be a treat in an otherwise no-contact allowed, score-as-many-points-as-you-can, offense driven league. The Giants feature a highly efficient, balanced offense led by the running of Brandon Jacobs, and the passing of Eli Manning. How the Steelers so-far dominant defense matchups against the excellent NYG offensive line, and their play-action ability, is a huge key in the game. Let's take a look at how the three Steelers defensive units might play against the reigning champs individually, and how that each one fits into our collective, overall defensive strategy:
The Defensive Line - Hot off the press is the most welcomed news that we will have our first healthy D-Line in weeks. Let us all rejoice. While Chris Hoke, Travis Kirschke et al. have played incredibly the past few weeks, a healthy Casey Hampton and Brett Keisel, along with the magnificent Aaron Smith, will be a huge boost against a superb Giants line. Look for our line to be up to their usual tricks. Each member soundly attacking the correct gaps, and (particularly Hampton and Smith), taking on double teams so our linebackers can go after the big, violent Jacobs with a clear path to the ball. Especially important is that Hampton is playing near his A game now that he's had almost a month to nurse his injury. Don't be surprised if the Giants double-team Smith early in the game, until Hampton proves he is truly "back." If Hampton can take advantage of single blocks early in the game and generate a big push into the backfield, that will go a long way towards shutting down the run of the Giants early, and forcing Eli to try and take over the game (something we WANT to see). 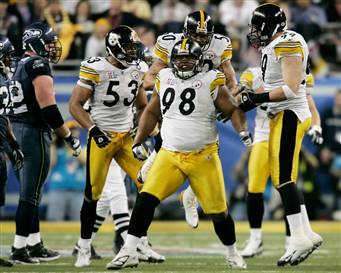 Big Snack is BAAACK! That's a good thing for our chances Sunday.
Basically, if the Giants O-Line has to worry about doubling BOTH Hampton and Smith on any given running play, we should have no problem limiting the effectiveness of Jacobs and Bradshaw. Lastly with regards to pass-rushing, as this season goes on, on obvious passing downs, teams are increasingly double-teaming BOTH James Harrison and LaMarr Woodley, which leaves the onus on the D-linemen and ILBs to get to the QB. Look for Keisel and A. Smith to be a bit more active in this area.
Click through for the remainder of the breakdown.

The Linebackers - The most important unit for this game in many ways. It's pretty safe to assume that the D-Line will do their job occupying blockers. They've done so successfully for years, why would that change this week? The linebackers, and especially the inside linebacking trio of James Farrior, Larry Foote, and Lawrence Timmons, will then be expected to do what they've done well - excel in limiting yards after contact and mopping up the dirty work done by our D-Line - against the best running game we've yet faced in 2008. When our ILBs get Jacobs one-on-one up the middle, they must (continue) to tackle with good form and not let him get yards after contact. While all of our defense and our LBs in particular are excellent tacklers, they have yet to face anyone like Brandon Jacobs. I expect them to do a good job in this area, Jacobs will have an OK day, but we should limit him to under 70 yards, on approx. 14-18 carries if we want to win this game.
As for the OLBs, Harrison and Woodley will also have alot of responsibility in this game. Of course, in passing situations they need to get to Eli, who has only been sacked SIX times this year! Any NFL QB would put up good numbers with that kind of time. We need to get to him a few times. More importantly, the Giants are likely to use the speed of Bradshaw to try and combat the fierce and relentless outside pass rush of the Steelers. Woodley & Harrison up to this point have done a good job of not becoming overzealous in the pass-rush and maintaining "containment" on outside runs and swing/screen passes. The Giants will be sure to test this, but I believe our guys will be more than up to the task. Bradshaw will be held in check, and then some. Brian Westbrook and MJD, who are similarly shifty and fast, certainly had their struggles against us, though I guess they didn't have a full game to be productive after being sidelined with injuries early on. 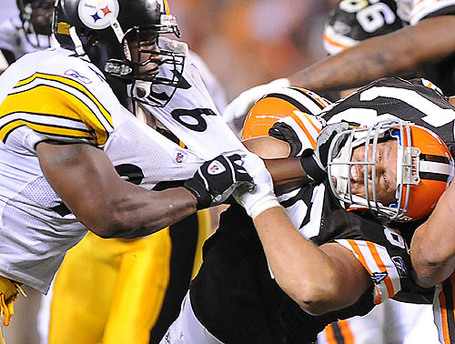 Any chance Harrison will get the chance to administer something similar to Plax?

Lastly, I expect Timmons to be very helpful in this game. As I mentioned in the D-line paragraph, teams are doubling Woodley & Harrison more and more. This means that the middle pass rush (usually coming from Timmons) HAS to be successful in order to make teams pay. This will be an area I watch closely during this game. Timmons also needs to continue to excel in pass coverage, as Giants TE Kevin Boss is very solid. Athletically, Timmons is far superior, but he needs to stay focused as Boss runs very crisp routes.
3. The Secondary - I for one don't think losing McFadden is a big blow, at least in regards to this game. DeShea Townsend will now draw Amani Toomer, who like Townsend, is suffering from the natural decline in physical ability that accompanies athletes in their 30s. Toomer continues to excel based on saavy and knowledge of the game. That matchup will be a wash at best for the Giants. The big matchup is on the other side, where Ike Taylor will face off with Plaxico Burress. I expect the Giants to use play-action early in this game, as they expect Pittsburgh's corners to be aggressive in run support early in the game. Taylor especially needs to be smart early in the game, not getting caught looking into the backfield (like 05 Colts regular season game) and letting Burress score an easy deep touchdown. Taylor has the physicality and strong jam that can give Burress problems, and he usually steps up against big-time receivers, so I like Ike to do well in this game. As long as our DBs have faith that the front 7 can stop the run on their own (which they can), we'll be in good shape when the Giants are then forced into passing situations.
The Giants have a decent receiving corps all-around, but it's not as deep as say, the Pats of '07, or the Bengals of '05. Plaxico should be amped up to show up his former team, but our guys, with a healthy Ryan Clark and Troy Polamalu, should be able to handle them for the most part. It's amazing I've gone this far without mentioning Polamalu, but don't let that fool you, he will be a huge factor in this game along with our ILBs, who all have the task of taking on the Giants running game. Polamalu will need to bring his A-game in run support. If the Giants throw a lot of screens against our pass-rush, he needs to react quickly and be that (along with Timmons) that torpedo that upends the ball-carrier in the flat. It'll be interesting to see early on if his reactions are affected at all by getting his bell rung last week. If they are, we'll need to get Timmons in the game more. Expect Ryan Clark to be sitting deep alot helping one or the other corners in the event of play-action deep attempts by the Giants.
Overall strategy: Really when you look at it, the Giants offense is very similar to the Steelers of '04 or '05. Big, power running back, a speed back complement, a QB asked to sell play-action and hit on the deep throws. That is a tough, balanced offense. On the other hand, the Steelers have the best defense I've seen in 15 years. No joke. I don't think the Giants O is as good as Philadelphia's is, and we held them to 10 points. (5 of their 15 total points were directly attributable to the offense's ineptitude that day). I expect LeBeau to show a bit more of our exotic blitzes in this game. Early in the year we got pressure just by beating guys one on one with our OLBs. Well, now that teams are doubling both of them more and more, you'll see us start to use our famed "inside X" blitz. It's the perfect time too, as the offense will be looking for the OLBs to rush, then when they feign the rush and drop back, the ILBs come charging up the middle. We used this blitz a lot last year, but it wasn't as effective because teams weren't afraid of the outside pass rush so they could slide inside quicker. Different story this year. 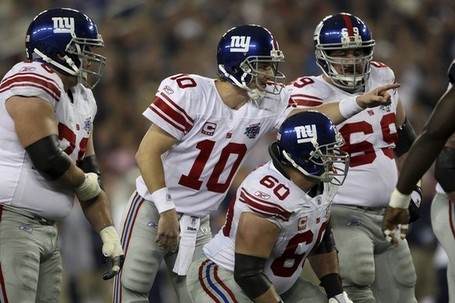 Eli's command of New York's offense is much improved from even a year ago at this time, but figuring out what Dick LeBeau has in store for him...at Heinz Field...is another story. A classic match-up of 'what gives'?

Look for Timmons and Farrior to be in Eli's face early on in this game. Also look to see Polamalu deployed closer to the line of scrimmage early on, not only in run support, but to try and confuse Eli and the offensive line in their protection schemes. All in all, while the Giants are very efficient and will prob put together a couple of good drives, I expect our defense to win this matchup. They want to run the ball and go big with play-action, we stop the run very well AND defend play-action well because of our excellent pass-rush. I know it sounds a bit homerish, but this defense has played so well without any misdirection early in the year that the game is truly opened up for them. Trying to game plan to beat our defense would give me nightmares, that is for sure.
We attack, and we attack with violence. That's the way football should be played. I truly can't wait to see our big, nasty D against that physical line of the Giants.
Anyone else have thoughts, comments on our defensive strategy....or are any of you just as generally excited to watch a violent, nasty football game like I am?