Steelers, Redskins and a Touch of History

Share All sharing options for: Steelers, Redskins and a Touch of History

So just who played in the first NFL Monday Night Football game?  If you think it was New York at Cleveland in 1970, you are 21 years too late.  The Jets and Browns  may have played in the first Monday night game on network television, but indeed the Pittsburgh Steelers and Washington Redskins played the first Monday Night football game in the NFL on October 3, 1949.  The Steelers and Pirates both shared Forbes Field in those days and with the Pirates playing the Cincinnati Reds in a doubleheader on Sunday, October 2, the Steelers and Skins played the next night.  Not surprising for those days, Washington got the better of us 27-14.

George Preston Marshall owned the Redskins for many years and was a thorn in Art Rooney's side (along with many others).  He actually owned the team when it was the Boston Redskins and moved to the nation's capital in 1937 after bemoaning poor fan support.  (Put that in your pipe and smoke it, Boston fans.)  Marshall and his buddy, George Halas, coach and owner of the Chicago Bears, hooked up to bully the rest of the league to get what they wanted.  Winning wasn't as important 70 years ago, so the other owners often let them have their way.  This was especially true with scheduling, which the owners did themselves at the annual spring meeting.

When Rooney hatched a plan for the Philadelphia Eagles to move into Boston's vacancy in 1941, and for Pittsburgh and Philadelphia to combine into the Pennsylvania Keystoners, Marshall blew a gasket.  He thought Rooney would somehow have an advantage by having all of Pennsylvania so he screamed to the heavens to stop the plan.  As usual, he got his way.

The Steelers-Redskins series began in 1933, and like most teams, the Redskins won most of those early games.  They jumped out to a 27-11-2 series lead by pounding Pittsburgh on a regular basis.  That dominance all came to a halt on December 13, 1953 in Washington.

While out-rushing and out passing Washington all game, the Steelers trailed after three quarters 13-0.  That was typical for them.  Getting lost in the was the great game Steelers cornerback Jack Bulter was having.  He had intercepted the great Eddie LeBaron three times.  Finally in the fourth quarter, the Steelers put a touchdown on the board to at least avert the shutout.  Late in the game, down 13-7, Jack Butler capped the game of his life by picking off LeBaron a fourth time, an NFL record still never broken, and taking it to the house for an electric 14-13 Steelers victory.

If you allow me to digress, it is an absolute shame that Butler is not in the Hall of Fame.  He intercepted 52 passes in an era where fewer games were played and much fewer passes thrown.  Only two players in 40 years had more.  He made four Pro Bowls and was in Pro Football Weekly’s Top 100 NFL Players of All Time.  had great hands and was called upon occasionally to play offensive receiver.  He caught seven passes and scored on four of them.  Moreover, he ran the NFL’s first scouting combine for 44 years, from 1963 to 2007.  It will be an injustice if does not live to see his bust in . 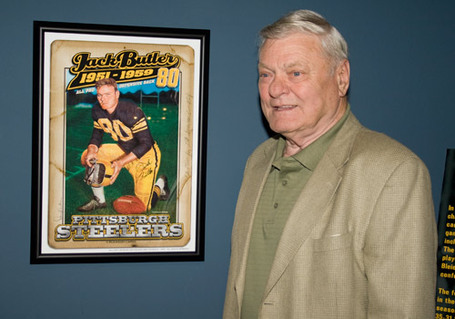 Anyhow, that game turned the series around.  The Steelers went on to win 20 against 16 losses and two ties since.  Washington still owns the overall margin 31-43-4.  The Steelers won the last game played in Ben's rookie season (2004) by a 16-7 score.  The Redskins also have the honor of being the last NFL team to play the Steelers in Three Rivers Stadium.  This happened in 2000 when Pittsburgh won 24-3.

The Steelers have won the last three games in the series, all at home.  Washington's last victory was in 1991, Chuck Noll's final season, 41-14.