Share All sharing options for: Big Ben Could Have Another Rough Outing Monday Night Against the Redskins

A quick look at the 2008 season thus far for the Washington Redskins revels one fairly striking fact: their pass defense has been outstanding. Only against Dallas did the Skins secondary yield more than 217 yards. In fact, opposing quarterbacks have only reached the 200 yard marker three times! Hell, the Skins even held Drew Brees and the high-powered New Orleans offense to just 195 yards, while turning them over three times.

Oh, and teams don't elect to not pass frequently on the Redskins because their rush defense is too vulnerable to not exploit repeatedly. The Skins have only surrendered 100 or more yards on the ground to a team three times, and are currently ranked 5th in the league in rush defense, giving up just a shade under 83 yards per game.

Why are they so good? That's a good question. Considering they've missed CB Shawn Springs, who was regarded as their best cover corner heading into this year, for four games already this season (he will sit out again Monday night), it's even harder to fathom.  Could it partly be because the Skins have been so effective running the ball themselves, making offensive coordinators anxious about rushing their defense back on the field with a quick pass-happy drive? I don't know, just a theory. Two guys though in particular deserve our attention: CB Carlos Rogers and S LaRon Landry. 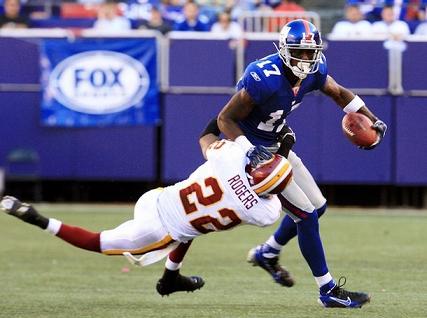 Rogers is a 6'2" physical CB, who is known for being aggressive with WRs at the line of scrimmage, bumping them off their desired course and thus making it tough often times for QBs and their WRs to be on the same page. I haven't seen enough of the Skins to know who he usually is lined up against, but I know his forte is banging with big WRs like TO. Well, we don't really have a big WR, even though Hines is plenty physical. My guess though is that he will line up against Hines more often than not, and a quicker CB will play opposite Holmes on the other side, with LaRon Landry keeping an ever mindful eye on our most explosive play maker at WR. 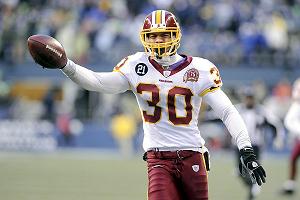 Speaking of Landry. This kid can play. The #6 overall pick in the 2007 draft, Landry has been a Godsend for the Skins, particularly after the team tragically lost Sean Taylor last year when he was murdered. He's got a great sense of the field - much like Ryan Clark - and outstanding tackling and ball hawking skills. A true modern day safety, who can play the run and the pass, much like our own Troy Polamalu. Chris Horton and Fred Smooth also deserve mentioning, but its really Rogers and Landry who make the show go for Washington.

The Redskins may not sack the QB quite like the New York Giants, but they certainly find a way to play amazing pass defense without compromising their ability to keep opposing team's running games in check. It's gong to to be quite the test for Ben Roethlisberger on Monday night on the road in the league's largest stadium. By no means do I think Ben has no chance to reestablish some rhythm, but it's not the ideal opponent to be facing following our putrid fourth quarter against the Giants last week.