It's Hard To Love Or Give Up On This Steelers Team

Share All sharing options for: It's Hard To Love Or Give Up On This Steelers Team

The following light hearted post has flaws in its parallels, and might not be worth the five minutes to read if you are a believer in love at first sight with relationships and with football teams. Anyway...

I liken the ebbs and flows of following the 2008 Pittsburgh Steelers season to how a sizeable percentage of relationships play out. There's the anticipation of finally actually meeting someone worthy of your time, energy, and usually bottled up romantic notions and proclivities (like being excited for the return of football). This in turn can lead to a hyperbolic initial assesment of his/her awesomeness (like a thrashing over Houston). Which of course, leads to some degree of disappointment when you realize that they, like everyone else, are flawed (the Philly, Giants, and Colts games, and to a lesser extent some of our victories where we struggled offensively). Finally, you're left to agonize over the unfruitful task of weighing their sizeable positives with the less frequent but nevertheless unignorable faults (the last three weeks where our franchise QB has been the main culprit behind our offense's struggles).

Well, if you're luckier than most or smell too bad to have encountered anything remotely similar to what I'm talking about while dating, let me set the stage, with parallels to the Steelers 2008 season of course, evident throughout.

You go out one evening excited about getting back in the game, so to speak, after a long layover following previous heartache in your last relationship. Your expectations are tempered lest your friends know you're even thinking about something long-term before even seeing the talent at your destination. That said, the subdued anticipation for what may unfold is decidedly detectable amongst you and your crew. This venue you're heading to and this social circle is typically filled with eye-candy that you wouldn't be embarassed to be seen with around your mother.

Well that didn't take long. Not thirty minutes into your escapades do you find yourself engaged in a surprisingly entertaining and interesting conversation with a salacious and magnetic young lady named Caitlyn. Your first impressions quickly make you forget the reasonable skepticisms you brought out with you that night concerning anything longterm with a woman even remotely resembling your last doxy.

You know better by now. Years of experience have taught you how to spot the major red flags up front. As in the visible cues some women give that they''re going to be more trouble than they're worth, and definitely not long term material. Like being excessively self-absorbed, maniacly chewing gum like a bovine while texting friends every 90 seconds, or taking her role in the game of cat-and-mouse 10,000x too seriously. There are just certain qualities that a SB contender and a long-term girlfriend can't possess, you know?

After that first night though, which entailed nothing more than a few too many drinks, some dancing and the exchange of phone numbers, you liked what you saw.  Sure, there were a few ill-timed text message, but I'm not sure you can confidently assign that sulfuric fart to her in a crowd of at least 200. But still, I agree, it was lame that she asked you if she looked fat not ten minutes after you had (through divine intervention) somehow managed to not be conspicous as she turned heads on the dance floor. But generally speaking, from what you are able to foggily recall the next morning, so far so good.

The next week you met again. I know, what are the odds that you and your new fling run into Amy the very next weekend? Talk about a good measuring stick. Even though there are plenty of reasons for you and Amy to at least respect each other given your respective back stories, you don't. You're rivals and you take a certain twisted pride in making each other look bad when you cross paths. You are a bit nervous, and understandably so. You're on her turf, an art gallery, where she's more equipped to condescend your far less pretentious date. A date, mind you, who is up to the challenge of being an entertaining companion downtown, but woud rather be watching a football game at home with beers in her sweat pants and with her hair braided in two pigtails underneath a baseball cap. Furthermore, many had recently reminded you that Amy was a lot cooler these days and not at all the deplorable person that delineated nearly all of your acquaintance.

Whew, she survived. Amy tried to rattle her, and at one time, you maybe would have liked to see Caitlyn respond a bit differently when pressed by the provacateur. But whatever, no harm no foul, considering all the supposed hype surrounding Amy's new personality, not to mention where the confrontation took place.

The next week is where things started to get ugly. After subjecting her to an art gallery, she responded by asking you to go out with her friends the following week. Stumbling across Amy 'on the road' in her element might have been tricky, but this was downright scary. I know you don't want to relive it, so I won't say anymore, but she better be grateful that you didn't drink too much and do something that would have crippled things permanently. And she's lucky she drank too much and has the alcohol crutch to lean on and blame. Without that cloak of an excuse to hide under, I'm not sure you could have forgiven her for conducting herself in precisely the way that you hoped to never encounter again for more than a few short minutes at a time.

Luckily, you were able to erase the painful memory of that night the following two dates. Things were a bit awkward, no doubt. But kudos to you for patiently waiting to see just how desirable her upside was compared to her flaws. Even if her flaws didn't disappear entirely, you at least got to see the most pronounced positive quality in Caitlyn shine brightly. Both dates had moments that were head scratching and frustrating, but the good definitey outweighed the bad, and after 5 dates, you were understandably more optimisitc about love than you were that fateful evening when you decided it was time to stop analyzing what had gone wrong in the past and to just go out and see how the next chapter would read instead.

Over the course of the next two uneventful weeks, including one where y'all decided to take a week off and not see each other, you went back and forth with your feelings. Ultimately, you thought it would be smart to see how she handled hanging out with your friends. As they say in football, you want to go up against the very best. In this instance, you wanted to see how she measured up in your friends' eyes. If she couldn't hold her own against the true champions of your social life, there was little hope of things working out down the road.

But she did. At least for 90% of the evening. Again, I won't rub salt in your wound by rehashing what went down. But as bad as that last 10% of the evening was, the other 90% was equally as promising. All of y'all were having a blast, and by the time the malfeasance of the night went down - and it was bad for sure - Caitlyn's best attributes had left the same impression on your friends as they had on you.

Still, after just five dates, despite all the upside, there was cause for concern.

And then, like all charmingly magnetic women are capable of doing, Caitlyn reeled you in hook, line and sinker the following week. After a slow start to the date, fireworks went off about half way in. By the time the evening's festivities had come to a close, at least those out in public, you had let your guard down and were convinced that maybe she was the one. You went back to your place, sparks continued to fly, and when you arose the following morning you felt comfortable committing to Caitlyn for at least the foreseable future, her faults be damned.

Not a week later, you got a not so subtle reminder that despite all of Caitlyn's marked positives - the type of characteristics, mind you, that are some of the most important to long-term viability in a relationship with you - there are still some glaring flaws. And they aren't inconsequential.

So what does a proud soul do?

There's arguably been enough evidence to realistically call it quits on Caitlyn. They say there's such a thing as love as first sight, no? And why settle when you could hold out for Miss Perfect. But like the New England Patriots of last year, Miss Perfect often stumbles when nobody's expecting it. And conversely, many a couple let down their guards and join as one for life many moons following their first encounter.

Like one can with their favorite football team (at least rational fans), one can usually trust their instincts when it comes to the girlfriends or boyfriends they are with (also, only applies to sane people..hehe). If you're pining about the negatives, it's usually a sign that it's time to pack up and move on. That said, in the 2008 version of the National Football League, it may be easy to overthink things, just like it is at times with significant others. In this year's NFL, just like in life, there are ups and downs. Nobody's perfect. Not your wife or husband. Not your best friend. Hell, not even your dog, computer, or mother is perfect.

So my advice? Find a way to embrace what you find becoming about Caitlyn. From everything you've told me, it's not just a long pair of legs and sexy smile that has kept you interested up to this point.  Sure, as is the case with a team's offense in football, most make their first impressions of potential mates based on the face. I guess Caitlyn disguised some of her flaws that first week with the right combination of you drinking, dim light and ample makeup, but we all know it's other attributes, like a voracious sexual appetite and the willingness to let you watch football without nagging an attractive personality and spirit that win proverbial championships.

Like I would say to all my friends obsessing over making a definitive determination about a fling, leave it be. Let things play out naturally without risk of your predeterminations effecting how fate might otherwise run its course. Take things week by week, enjoy the positives and stop wasting another precious minute trying to determine how things will play out. All things, from a football season to a relationship must eventually take a fateful path once encountered with a big enough fork in the road. That day's coming, but it's not yet here.

If nothing else, I can tell you this. The ride will be a lot more fun if you haven't made up your mind either way. 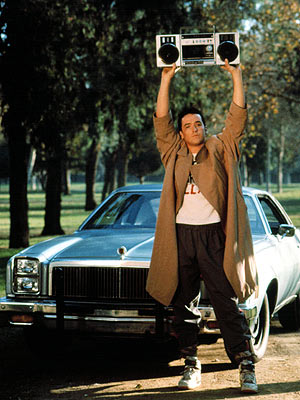 Like Cusack in Say Anything, I may be foolish for not seeing the fallacy in believing in this Steelers team. That's ok with me though.