The NFL Is A Really Fast, Violent Game: Should It Then Be Such A Surprise Ben Roethlisberger Is Slumping?

Share All sharing options for: The NFL Is A Really Fast, Violent Game: Should It Then Be Such A Surprise Ben Roethlisberger Is Slumping?

I'm going to try to make one final case as to why things might still be ok for this offense moving forward. Don't get me wrong, the writing's on the wall for this team, even if it were able to slide in the backdoor for a playoff berth. And by that I mean that it's getting clear that we'd need an unexpected string of great performances, something we haven't seen in over three years since winning our 5th Lombardi Trophy in 2005. But it's my last effort to try to explain why things aren't as simple as 'Ben sucks' or 'Ben's great.'

Ok, I'm assuming many of you have played sports somewhat competitively at some point in your life. You know there's a difference between game speed and just playing around with your pals speed, even at the most amateur of levels. If you played football, you know quick things seem to materialize around you.

Think back to any interview with a rookie NFL player when they are asked what's the biggest difference between the college and professional games? Answer? EVERY TIME! The Speed Of The Game. No? Have you ever heard ANY other answer to that question. Didn't think so.

So now, even though its nearly impossible to fathom, try to think just how fast the NFL game is. 50 yard pass plays take roughly 5 seconds tops to materialize. Quicker hitting pass plays and runs..boom, over in a blink of the eye. End arounds in the NFL? Don't usually work because LBs and even DEs are too fast. Reggie Bush? Largely negated in the NFL. LBs are too fast on the perimeter and too sure a tacklers. Pass rushers like LaMarr Woodley and James Harrison? Up in your grill in literally the blink of an eye. The speed of the game is incomprehensibly impressive for guys this big and strong.

So what's my point?

Very simple. It doesn't take much to disrupt the continuity of an entire offense when things are happening that quickly. If your QB has even an inkling of hesitation or self-doubt, turn out the lights. If your QB is just a smidge unconfident in his progressions, all that work in the offseason to develop impeccable timing between QB and WR is out the window. 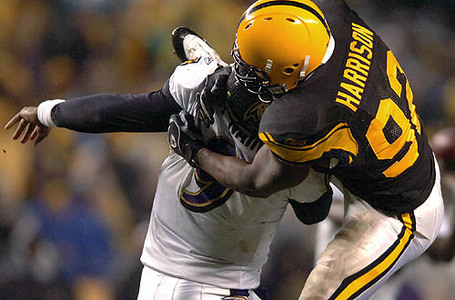 Jeez Ben! Stay perfect year in and year out while guys like Silverback try to claim the bounty placed on your head!

And to make matters even more tricky, QBs must have tremendous feel for what's going on around them. There's no time to look around and visually assess what's happening. It has to be instinctual. It's this part of quarterbacking where the greats are able to separate themselves from the just so-so QBs who can make throws with no pass rush barelling down on them.

Look, we're out of sync. But seriously. I'm not trying to oversimplify things when I just say take a deep breath, close your eyes, and truly try to imagine what it would be like to play at that speed. It's doable. QBs do it all the time. But just like hitters in baseball, or shooters in hoops, QBs too can go into slumps. It doesn't take much to make even the best hitters look god awful for a week at a time even. Same with QBs. The whole deck of cards can collapse very easily when things are off by even just this much.

It's for this reason that I'm not giving up hope on this offense yet. Ben does have the natural feel necessary to be a great QB in this league. When he's on, he's better than almost anybody not named Peyton. Unfortunately, Ben finds himself in a mental rut, not to mention he's banged up which likely is adding to the mental issues. But it can, and it likely will get corrected.

Will it stay corrected over the course of the season? Who knows. Doubtful, beceause it all starts up front with the OLine. They hold the keys to just how much the game is able to 'slow down' for the QB. But I would bet every last red cent I own that Ben finds his comfort zone and acclimates himself to the insanely impressive speed of the game in the National Football League.  Be patient for now, and try to remember just how easy it is to go in a slump when things are happening at such a breakneck pace.