Coming into the contest, the San Diego Chargers were averaging 349 yards per game. Today, we held them to 210 total yards! We gave up an average of 4.3 yards per play, which somehow is worse than our mind boggling season average of just 3.8 yards per play. By the way, did you see when they flashed the graphic that the Steelers 3.8 yards per play allowed was the best mark since 1978! That's remarkable. I'm going to investigate this further, but my hunch is that there haven't been any defenses under 4.0 yards per play since the passing game truly became more prominent in this league over the course of the last ten years. Even on one of our 'off' days, our defense was better than the 2nd best defense for the year.

The points per game will distract people a bit, but the reality is that this defense is historically good. One of the best in the modern era so far through 10 games. And so long as it stays like this, which there's no reason at all to think will not be the case, we have a little bit of leeway to be patient with the offense. It just needs to be so-so for us to have a great shot at a deep run. Today, they were better than so-so, but not quite great. Perhaps next week against the Bengals our offense will take the next step forward and actually finishing off some drives.

Phillip Rivers finished the day with just 159 yards on 15/26 and 2 INTs. Toss in -12 yards from our two sacks and the Chargers finished with just 147 net yards passing on the day. That means despite no Bryant McFadden and DeShea Townsend, we sitll found a way to best our league leading passing yards allowed per game (171).  Mike Tomlin deserves credit for plenty of things, but perhaps none more than his success elevating the play of our defensive backs to unbelievable heights. 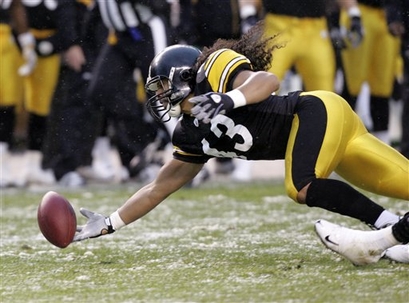 When we force a turnover or two, and avoid making costly mistakes ourselves, we're going to be very hard to beat. The play above by Polamalu was jaw-dropping, but it was Harrison's sneaky fall back into coverage and pick that truly changed the game.

Next up? Cincinnati at home. The Bengals have improved since the last time we met, but I think it's a safe bet to think we'll again find ourselves marveling about the season our defense is putting together by the time next week's game comes to a close.