Is Hines Ward Worth His Salary Cap Value This Year?

Share All sharing options for: Is Hines Ward Worth His Salary Cap Value This Year?

Absolutely he is. At least in my estimation.

According to the cap figures I've looked at, Hines Ward's cap hit for 2008 is approximately $6.7 million dollars. That is a decent chunk of our team's projected alloted $116.7 million dollar salary cap total, no doubt. But is the investment a wise one? Look,  there's an undeniably a reasonable economic argument to be made based strictly on statistical output. For the money, Hines may be falling a tad short of the dollars he's commanding. But it goes so much deeper than that.

If you really want to talk economics and return on investment, I'd gladly argue that maintaining the Steelers brand of one of loyalty, family and stability is far more important than saving $3-$10 million dollars in the short run, or whatever it might cost to keep Ward around through, say, 2012.

Whatever it takes to keep Hines Ward in Pittsburgh until the day he retires will be recouped many times over by the maintenance of that special brand and image that the Steelers exude all across our country, and slowly but surely, even the world.

Here are five reasons why I say yes, Ward is worth every cent, and why we better find a way to make sure he retires a Steeler.

1) His 2008 numbers have actually been quite solid

Hine's stats through the first half of the season (broken jaws and other punishing blocks not included):

Now, are those #1 type numbers? Not necessarily, though it's important to remember the struggles we've had on offense. We're not one of the more prolific passing teams in the league (24th in the league at 181.4 yards per game). Yet, he's on pace for nearly 900 yards, exactly 10 TDs, and close to 70 catches.  If you look at his career stats, you'll notice these pro-rated numbers are about on par with what he's averaged the past three years, which is roughly 70 catches for 950 yards and 7-8 TDs. Hines has had a few drops and has struggled against our NFC East opponents (as well as Baltimore), but he's also made big plays in nearly every game we've had, including our MNF win against the Redskins, where he caught several critical 3rd down grabs in route to our 23-6 victory.

Ah, now we get into murky intangibles for the moment. But it's true. Sorry. Hines is another coach on this team. I won't dig up all the articles right now, but this offseason during camp, there were numerous articles discussing how hard Hines worked with guys like Nate, 'Tone, and Limas. Sure, Holmes veered off track and acted selfish this year with his marijuana arrest, but for all the doubters about Holmes out there, the fact is is that he'd be blowing up in a pass-happy effective offense. He's shown the ability to be a deep threat, a possesion receiver over the middle, and one of our most valuable facilitators on offense. By that I mean teams up to this point have been willing to roll the dice and let us try to beat them deep with Nate Washington because of Holmes.

Anyway, Hines is the heart and soul of this team more so than any other player, coach, or executive not named Rooney. To let him go would be a TERRIBLE move as we approach a window (in my opinion) where we could be close to being as dominant as any team in the league provided we learn how to close a bit better against good teams. Hines needs to be a part of that. He has a SB ring and still commands the most respect out of any guy on our offense, Ben Roethlisberger included. 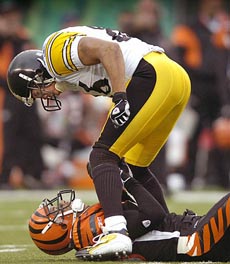 Really? Don't think that extra couple Mil is worth it?

If we can't find a way to compensate Hines fairly while still maintaining the financial viability of our team, there is literally no hope to retain good talent moving forward. Why? It sends a message to our players. The message being 'we don't care what you've done for us in the past or what intangibles you bring to the team dynamics, if you're on the downside of your career or at all capable of commanding higher value elsewhere, we're foregoing the effort and just letting you go.' Seriously, it's hard to keep guys like James Harrison, Bryant McFadden, Heath Miller, etc if you show no loyalty to arguably one of the 15 most important players in your franchise's history.

I can't emphasize this enough. We all chalked up the Alan Faneca decision to a 'business decision' with little to no dissent. Sure, some have voiced their longing for Faneca's presence during our struggles this year, but when the decision was made, most everyone was on board with it. That's fairly remarkable really when you consider how much Faneca meant to our team's consistent success during his tenure in Pittsburgh.  The one thing I would say is that offensive linemen are so damn expensive these days that us being priced out is justifiable from a PR perspective. WRs? Not as expensive in the first place, and certainly not unselfish ones like Ward who robust endorsement packages each year, particularly in his local market. Bottom line, I don't think any excuse will fly if Ward is at all ready to sit down at the negotiating table to find common ground.

Are we really ready to do the same with Hines?? I mean, are we ready to just let Hines walk and say 'ah, he was getting old and too pricey for just 50 catches and 5 Tds.'  I sure the hell am not. #86 better retire as a Steelers player. A part of my faith and love of the team depends on it.

Who cares about me though. What about guys like James Harrison? Ike Taylor? Aaron Smith???  Or better yet, LaMarr Woodley. Kid seems grounded. Can you see him wanting to go down as the best Steelers pass rushing LB ever? I could. But not if we set a precedent early in his career that the organization really doesn't act flexible when it comes to special players and personalities on and off the field.

4) Age can be deceiving/He's not THAT old

There's no doubt players start to slow down once they pass the 28-30 year mark. Happens in just about every sport. However, it's not quite the same as it was a few decades ago. Today's sports science allows players to be much more productive in the age range of 30-35. Hines is only 32 years old. Terrell Owens? About to turn 35, and two of his better years as a pro came in the last two years.  Ward's definitely a step or two slower than he was in his mid 20s, but there's no reason why he still can't be a fantastic complimentary WR threat on this offense for another couple of years if he wants to be.

5) Is he really overpaid?

Let's took at some of the other high salaries on our team to get a better feel of whether Hines is earning too much money.

So, as you can see, Hines is definitely one of the higher paid players on the team. If we were to resign him after next year, it would certainly need to be at a reduced price. But for now, my opinion is that he's still more or less worth it. We find certain guys that are 'glue guys' and we find ways to keep them around. It's what we did with Farrior and Bettis, and I presume it's what we'll do with Ward. There's just no way that guy finishes his career somewhere else.
One final thought as it relates to Nate Washington and Santonio Holmes. In my humble opinion, unless Nate is willing to play for less money, I think he'll be the odd man out. And if you ask me, he'll chase the dollars elsewhere, and I wouldn't blame him. We have money invested in both Holmes and Sweed, and we're going to try to find a way to make them be major contributors for us in the future at all costs. Washington on the other hand, has already in a way allowed us to play with house money. He's been so much better than advertised for a guy out of Tiffin College. We've recouped our investment in him and then some, but as for Holmes and Limas, we've still got a ways to go before we break even.
I think it would be foolhearty to expect that Nate can do many of the things that Hines can do as a #1/#2 type WR. He benefits from LBs being committed to Hines and Safetys keeping an eye on Holmes. Seriously, look back at his catches. Most all of them are in single coverage. I think the front office believes that Limas can fill that role of Nate Washington and then some the next several years while Hines winds down, which would only require us to find another Nate Washington type prospect in the next several years.

That's not much to ask compared to replacing the heart and soul of your franchise who still manages to play the game so violently and competitively that he's knocking out 1st round defensive players and provoking thugtastic players into calling for his head.
Simply put, Hines gives us an identity and personae that I'm not ready to relinquish. Certainly not now while our offense still has little to no identity. 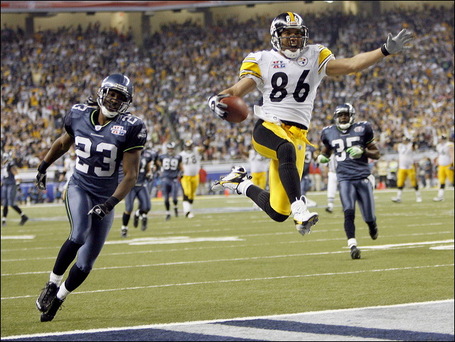 As important as Lambert, Bradshaw, Harris, Swann, Lloyd or Greene in the team's illustrious history. Not that the Rooneys need reminding. At least I hope.
One last thing...
5a) Is there a better community guy than Hines?
No need to elaborate here. Pittsburgh loves Hines. Hines loves Pittsburgh. And he shows it. I wrote the same thing last week after the crushing loss to the Giants. We all have to do our part to keep this Steelers brand special.

Hines sets the tone for us all.
Just some thoughts? Yours?