Guess who is familiar with our little sandbox here at BTSC?  Yep, none other than Art Rooney Jr., one of five Rooney brothers who own 80% of the franchise.  Mr. Rooney not only acknowledged the site, but was kind enough to chat a bit about our common love, the Pittsburgh Steelers.  Art Rooney Jr., as you may have seen, is up for the Hall of Fame this year.  I wrote adamantly in the past that his absence from Canton is a gross injustice.  He was the centerpiece along with Bill Nunn, Jack Butler, Buddy Parker and others who completely overhauled the way scouting was conducted not only in Pittsburgh, but across the entire National Football League.  By the time the rest of the NFL caught up to the Steelers scouting system, it was four Super Bowls and nine Hall of Fame players later.  If that's not Hall of Fame, I don't know what is.  And if you ever want to read a great book, get a copy of Ruanaidh, his recent publication.

BTSC:  It's flattering that you are aware of our Web Site.  How did you find out about us?

Mr. Rooney:  My staff makes me aware of those things.  We kept trying to guess who this "Maryrose" was.  My office and people connected with the Steelers thought you were an insider.  I  thought for sure you were one of the retired coaches' wives or secretaries.  It is thoughtful discussion with a sense of history.

"Thoughtful discussion with a sense of history." 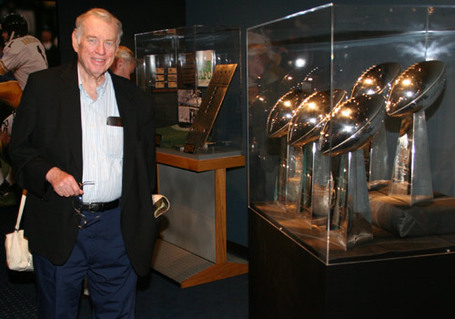 Art Rooney Jr., Visiting the Hall of Fame in which he should be

BTSC:  How did you manage to help turn around a losing mindset 40 years ago?

Mr. Rooney:  We completely revamped the way we did everything.  Scouting was my passion, my hobby and my job.  I loved finding the diamonds in the rough.  Our regime drafted nine Hall of Famers, plus we did the preliminary paperwork on Rod Woodson who will be in the Hall.

BTSC:  What is your assessment of the team now.

Mr. Rooney:  Our quarterback is getting hit way too many times.  When you pay that kind of money for a franchise quarterback, you had better make sure he doesn't get hit like that.  We should win at least four or five more games.

BTSC:  What has stood out for you while all of the recent ownership issues have been going on? 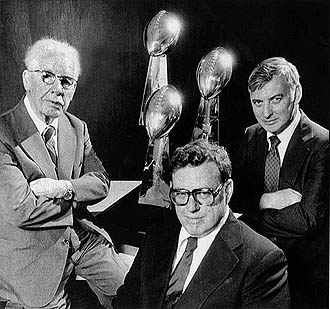 Art Rooney Jr. (center) was the unsung Rooney behind the Super Bowl trophies

BTSC:  Are you confident that will happen?

Mr. Rooney:  Yes I am.  We're channeling all our efforts into that process.

BTSC:  I've read that the timetable for getting everything settled is the end of the calendar year.  Is that accurate?

Mr. Rooney:  Yes it is.  Because of the election, we may be facing some major tax increases after the first of the year.  We need to get settled before that happens, or we may find that 15 percent will become 25 percent or higher when we pass things on to the next generation.

BTSC:  How much of an issue is the 30% rule where the NFL demands at least one ownership partner to own at least 30% of the team?

Mr. Rooney:  That's not an issue now because Dan is grandfathered in.  As long as he is the principle owner, he doesn't need to own 30%.  The issue will be down the road with Dan's son.  Art II is not grandfathered, so he would need to own 30% of the team to be in compliance.

BTSC:  What about the gambling issue?

Mr. Rooney:  My dad would be furious right now.  At least five of the original founders of this league owned race tracks and used some of that money to keep the league going.  All the race tracks now-a-days are adding casinos and that is making things really tricky for us.

Mr. Rooney:  The economy.  Trying to find investors now is not easy, but he'll do it.  The Steelers are a strong and popular commodity.  It may be awkward for him down the road.  Right now we let him do whatever he wants.  He doesn't have to answer to anyone. When he gets outside partners that will all change.   Those partners won't be happy about giving a guy a hundred million and then watching him get killed.  He'll need to answer to his partners, even if he is primary owner.

BTSC:  What is the secret to success, yours or anyone's?

Mr. Rooney:  Have a passion.  Next to your family, have great passion for you job and use that to energize your entire career.  Having passion is the key.

BTSC:  How does it feel to be up for the Hall of Fame?

Mr. Rooney:  It's a great honor just being nominated.  Usually the Hall is for players, coaches and ownership chairmen.  For me to be nominated is very humbling.