Steelers fans don't need me or anyone else to remind them how impressive our defense has been this season, but now with three-quarters of the season in the books, it is interesting to look inside some of the numbers.  The Steelers lead the NFL in the grand slam of all four defensive rankings, most importantly, points-per-game:

Remarkably, Pittsburgh has given up 10 points or fewer in half of their 12 games, including the last three in a row and four of the last five games.  What makes Pittsburgh's league-leading scoring defense more impressive is the fact they are disadvantaged by "hidden yards" more so than any other team I suspect, because of horrible punting and self-inflicted penalties.

The Steelers are dead last in the NFL in punting average (39.5), yet rank eighth in opponents' punting average against (43.2).  Using the median between total Steelers' punts (57) and our opponents (66) to arrive at a per-game yardage difference, the Steelers give the opposition 19 yards-per-game in field position.  All of those poor Steelers punts give the opponents a shorter field and yet the defense still gives up the league's fewest points.  In addition, we have been penalized more than our opponents, 695 yards to 672.  That margin is not nearly as dramatic as the punting, but it does add to the hidden yardage that works against the defense.

The Steelers have given up 16 touchdowns this season.  You may recall the first two came in the fourth quarter of the Houston massacre when the first string was texting their families on the sidelines.  Another came against Baltimore when Mitch Berger booted a quarter-pounder to the Steelers 44-yard line.  Of course, Ben gave Rashean Mathis his obligatory pick-six against Jacksonville, and then gave the Colts two early Christmas gifts on the 30-yard line.  This past Sunday, Ben gave New England a 14-yard field to work with on the Vrabel interception.  That leaves a total of nine touchdowns this year (and this includes the Ike Taylor gift to Reggie Wayne) where the opposition drove at least half the field to get into the end zone.  That's less than one per game, or three every four games to be exact.

The Steelers have also given up 18 field goals.  Five of those came from turnovers without the opposition getting a first down (Houston, Philly, New York and Washington twice).  Another five came from turnovers or shanked punts that surrendered the ball on our side of the field (Philly, Baltimore twice, New York and Cincy).  Only eight times have the opposition driven past midfield to score a field goal.  That too is less than one per game, or two every three games to be exact.  Incredibly, only 17 times all season has the opposition crossed the 50-yard line to score any points against Pittsburgh's first-team defense, and half of those have been field goals.

In addition to scoring defense, the Steelers lead the NFL in the yardage hat trick:  rushing yards, passing yards and then of course, total yards:

In rushing, the Steelers have not allowed a 100-yard rusher all season, compared to the NFL average of 114 yards-per-game.  They have not allowed a 300-yard game, despite the NFL average of 327.  Not only are they better than average, they've never allowed average.  In passing defense, this past Sunday, the Patriots caught 19 of Matt Cassel's passes for 169 yards.  The Steelers defense caught two of Cassel's passes for 112 yards. 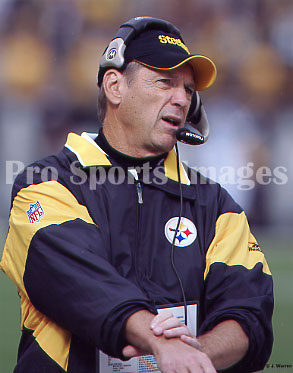 Put this Man in the Hall of Fame

Yes, anyone who follows the Steelers knows that the defense is playing exceptionally well these days.  The numbers are great without qualification.  Yet when you factor in the horrible punting, penalties (especially so many on third downs that keep drives alive) and costly turnovers that have put the defense on the defensive, these guys and their coaches deserve a great big Steeler Nation salute.