1975 Steelers: Remembering the Glory of Super Bowls Past

Share All sharing options for: 1975 Steelers: Remembering the Glory of Super Bowls Past

One of the great things about preparing for your team being in an upcoming Super Bowl is to reminisce about celebrations of previous Super Bowl glories.  In the fall of 1975, President Gerald Ford, a football star in his own right from the University of Michigan, was leading a radical but stable country.  The Vietnam War had officially ended, finally.  Saturday Night Live, with its first show hosted by legendary George Carlin, had taken the nation by storm, while Archie Bunker's All in the Family was the top prime time television hit.  In movie theaters, "Jaws" was the top box office draw.  A gallon of gas cost Americans 36 cents and quietly, a company called "Microsoft" was born.

For the Pittsburgh Steelers, the 1975 season was better than the one before.  The Steelers went 12-2 in the regular season.  They lost their second game to Buffalo.  They went through the motions in the season finale in Los Angeles with nothing to play for except the avoidance of injury.  In between they reeled off 11 consecutive victories and averaged more than 28 points-per-game in doing so.  Come the playoffs, Pittsburgh dispatched both Baltimore and Oakland, holding each to just 10 points.  Super Bowl X in Miami was waiting and so were the Dallas Cowboys.

Sunday, January 18 was the day and I found myself in deep dilemma.  I was a college student and proud to hold the position of Intramural Supervisor.  It was my first real job and I took it seriously.  Sundays were the biggest days of the week with intramural basketball.  Shirking my duties seemed like an unacceptable option, but so did missing the beloved Steelers in a Super Bowl.

In King Solomon fashion, I decided to split the difference.  I went to the Recreation Center on campus, gathered all the referees in a huddle and told them I was ill.  (At least emotionally I had rationalized the truth.)  Rather than explain what made me sick, the thought of missing the game, I figured they would better accept the excuse that I had the flu.  I was 20-years old making two bucks an hour.  In my mind I had compromised just being there.

My pitch was that I would be around, but not nearly as visible as usual.  I would check in from time to time (during commercials and halftime), but don't look for me on a steady basis.  My boss, a full-time adult Director of Intramurals, did not work that Sunday or any Sunday.  He did have a television in his office and I did have a key.  Fortunately no fights broke out and no major fires were needed to be put out.

With that taken care of, I turned my attention to the game.

The game did not begin well for Pittsburgh.  Hollywood Henderson, of all people, returned the opening kickoff all the way to the Steelers 44.  Dallas didn't score, but gained field position.  When Pittsburgh a punt the Cowboys' second possession began at the Steelers' 29.  On the first play Roger Staubach hit Drew Pearson, who slithered untouched into the end zone.

On Pittsburgh's next possession, Lynn Swann made the first of his three spectacular catches.  From the Dallas 48, Terry Bradshaw threw a beautiful pass to Swann, who was tight roping the sideline.  Cowboy cornerback Mark Washington was in perfect position.  Having to overcome both the sideline and Washington, Swann twisted his body into a leap that only he could have performed and caught the bomb to the 16-yard line.  A few plays later Bradshaw rolled right and hit tight end Randy Grossman for a seven-yard touchdown.

With the game tied 7-7, Dallas wasted no time with a drive that ended with a Tony Fritsch field goal  to take a three-point lead.  Both offenses were playing aggressively, though no more scoring would take place in the first half.  Late in the half Swann made his second beautiful catch.  Bradshaw threw a bomb down the middle and again Mark Washington was in perfect position.  Swann could only use his gymnastic ability to reach around Washington and tip the ball to himself.  The play was good for 53 yards, but Roy Gerela missed the tying field goal.  Unknown to all the viewers, Gerela was kicking with a cracked rib from attempting a tackle on the opening kickoff. 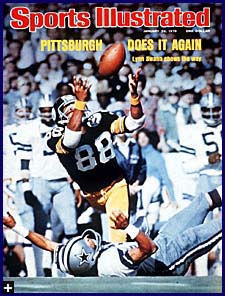 In the third quarter Pittsburgh's J.T. Thomas picked off Roger Staubach and returned it 36 yards to the Dallas 25.  When Gerela missed his second field goal, it would become the play that turned the game around in the Steelers' favor.  Cowboy defensive back Cliff Harris decided to taunt Gerela and tapped him mockingly on the helmet.  Jack Lambert caught this act of foolishness out of the corner of his eye.  Memo to Harris:  You do not want to upset Jack Lambert.  Jack Splat picked up Harris and threw him to the ground like a rag doll.  In today's game, Harris would have been flagged and Lambert would have been ejected.  In January of 1976, boys would be boys. 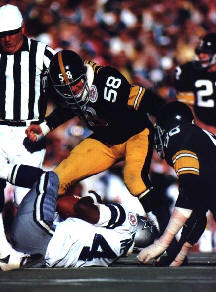 Lambert was a man possessed from that point forward.  Both unassisted and assisted, he had a hand in the next five tackles.  For the rest of the game, until Pittsburgh had all the points it would need, the Dallas offense was rendered completely useless.  Lambert was all over the field and Staubach, nicknamed "the Dodger" for his elusiveness, found himself eating a heavy dosage of Florida soil.  He ended up being sacked seven times in the game.

The Cowboys still had a 10-7 lead in the fourth quarter, but as television announcer Pat Summerall said, "Dallas is in trouble."  It may seem strange for a team with the lead and the ball to be in trouble, but Summerall knew what he was feeling.  A couple plays later Pittsburgh's Reggie Harrison blocked a punt out of the end zone.  It would be the second straight year that the Steelers would record a safety in the Super Bowl.  Dallas still led, 10-9.

Pittsburgh got the ball in good field position and drove into field-goal range.  This time Gerela did not miss.  The Steelers had their first lead, 12-10.  The Cowboys, still impotent since the Cliff Harris blunder, promptly threw a pass that was picked off by Mike Wagner and returned to the five-yard line.  It was the second consecutive year that Wagner would intercept a pass in the fourth quarter of a Super Bowl.  Gerela's second field goal gave Pittsburgh a 15-10 lead.

Again Dallas was stonewalled.  Pittsburgh got the ball back and it was Lynn Swann time again.  On his own 36-yard line, Bradshaw called for a bomb to Swann down the middle.  Cliff Harris blitzed on the play, leaving poor Mark Washington in single coverage with Swann.  Harris got his lick in.  He knocked Bradshaw out of the game with a concussion.  But Bradshaw first got the pass off.  Washington again stayed right with Swann, but the pass was too perfect to defend.  Bradshaw never saw Swann score the 64-yard touchdown pass.

Trailing 21-10 and with time running out, the Dallas offense finally made some desperation noise.  The Cowboys scored on a 34-yard touchdown pass that created one of the greatest trivia questions of all time.  A fellow named Percy Howard, a rookie from Austin Peay, caught the pass.  Howard never played football in college and had not caught a pass all year.   And he never played again after 1975.  Combining college and pro, Percy Howard caught exactly one pass in his life, and that was a touchdown in the Super Bowl.  How would you like to tell that one to your grandchildren?

All Pittsburgh needed to do was run out the clock.  Dallas had to use all its timeouts after each running play, but the Steelers failed to gain a first down.  On fourth and nine from the Dallas 41-yard line, Chuck Noll decided to run it up the middle.  I was yelling at the television begging for a Bobby Walden punt.  I am not smart enough to ever second-guess Chuck Noll.  This was the lone exception.  Because the clock stopped at change of possession, it made no sense to run the ball.  If you are not going to punt, at least call a pass play that could get you a first down.  An incomplete pass stops the clock the same as a fourth-down running play, but what do I know.

Maybe Noll was afraid of a bad Snap or blocked punt, I don't know.  All I do know is that we didn't punt and Staubach had the ball back on the 38-yard line with almost a minute and a half to play.  Holy Smokes.  Staubach actually got the Cowboys into position to at least try a couple Hail Mary pass plays at the end of the game.  Fortunately for Pittsburgh, his last pass was intercepted by Glen Edwards in the end zone and the games was over, 21-17.

The Steelers had no turnovers in the game.  It was the second straight Super Bowl that Terry Bradshaw had not thrown an interception.  Lynn Swann was the game's MVP.  He caught only four passes, but for 161 yards (a mere 40 yards per reception), a Super Bowl record.  Swann was doubtful to even play in the game.  Against Oakland in the AFC championship he was leveled on a vicious (and completely unnecessary) hit by the Raiders' George Atkinson.  Swann sustained a concussion that left him in serious doubt for the Super Bowl.

In the locker-room after the game, the Lombardi Trophy was handed to Dan Rooney for the first time.  It was appropriate.  The next day in the Post Gazette the headline talked about a "cliffhanger."  I am guessing the editors were thinking "cliffharris," since his bonehead turned the entire game around, never to go back in the Cowboys' favor. 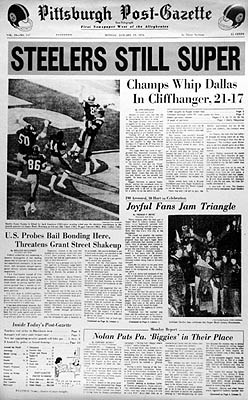