Arizona OC Todd Haley Grew Up with the Steelers

Share All sharing options for: Arizona OC Todd Haley Grew Up with the Steelers

There has been much discussion about "Pittsburgh West" and the connections between the Steelers and the coaches and players of the Arizona Cardinals.  One such connection is Arizona Offensive Coordinator Todd Haley.  Haley is the son of Dick Haley, a Pittsburgh native and former Steelers player who came back to work as Director of Player Development for the Steelers from 1971 to 1991.

Special thanks to Art Rooney Jr., who gave us a few moments to reflect on the father-son duo.

Dick Haley grew up in Midway in the Pittsburgh metro area and graduated from Pitt in 1959.  He was a running back drafted by the Washington Redskins.  The Skins used the versatile Haley as both a running back and defensive back.  Haley came back home to Pittsburgh in 1961 and played for the Steelers until 1964.  The Steelers played him at cornerback, though his football cards continued to list him as a halfback.  Those were the days of innocence when the card companies weren't very accurate and frankly, nobody took issue anyway.  In fact, the card below was issued in 1965, the year after he retired! 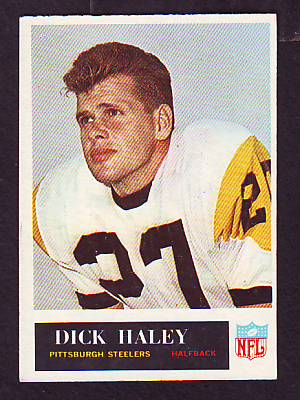 Haley's best year was in 1963, when he picked off six passes and took one to the house.  His best interception that year, according to Art Rooney Jr., never made the box score.  In 1962, the Steelers had a volitile defensive back named Johnny Sample.  Sample never stayed in one place very long.  His feud in 1962 was with Steelers Assistant Coach Buster Ramsey, so the Steelers shipped him off to Washington.  When the Redskins played the Steelers in 1963, Sample intercepted a pass and headed right for the Steelers bench where he cocked to fire the ball at Ramsey.  Haley came out of nowhere and caught the ball before it struck a startled Ramsey.

"It was a great play by Haley, even though it wasn't on the field of play," recalled Mr. Rooney.  "He saved Buster big time from getting drilled."

Haley's injuries mounted, causing retirement from the field after the 1964 season.  Art Rooney Sr., who always looked out for his players, made certain Haley got a job in sports.  At that time the Steelers were main players in starting the first scouting/combine service in the NFL called "BLESTO" (standing for Bears, Lions, Eagles, Steelers Talent Organization).  Since Had played both sides of the ball, he was a bright young man who understood both offense and defense.  Haley joined BLESTO and worked in its Atlanta office throughout the late 1960s.  It was there that his son Todd was born in 1967.

When Art Rooney Jr. was elevated to Vice President of the Steelers in 1971, it created an opening in the Pro Personnel Department.

"I offered the job to Haley." said Mr. Rooney.  "He was, and still is, an outstanding  talent evaluator.  At the time we weren't allowed to offer a BLESTO employee a lateral move, so when a better position opened up with us we grabbed him."

Haley's first draft with the Steelers was the 1972 Franco Harris draft, and he was also a valuable member of the operation in 1974 when the Steelers drafted Swann, Lambert, Stallworth and Webster.  Haley remained with the team through the Chuck Noll era, ending in 1991.

As for young Todd, he cut his teeth as a ball boy and towel boy for the Steelers while growing up in Upper St. Clair.

"He was a friendly kid with a bundle of energy," remembered Mr. Rooney.  "He would do anything anyone ever asked.  You can still see his enthusiasm today on the sidelines.  He's doing a great job for Arizona.  I can see that same energy now."

After graduating from Upper St. Clair, Todd graduated from the University of North Florida.  He moved into NFL coaching in 1995 as the New York Jets Wide Receivers Coach.  All of those hours joining his dad watching film and assessing talent made Todd a natural in the coaching industry.  Dick could see clearly that his son was gaining a deep knowledge of football while breaking down tape.  Todd joined the Chicago Bears staff in 2001, also coaching wide receivers, and then went to Dallas under Bill Parcells as the Receivers Coach and Passing Game Coordinator.

When Ken Whisenhunt got the Arizona head coaching job in 2007, he asked Todd to join him as Offensive Coordinator.  It is obviously a marriage that has worked well.  After next Sunday, I hope it continues to work well.