1974 Steelers: Remembering the Glory of Super Bowls Past

Share All sharing options for: 1974 Steelers: Remembering the Glory of Super Bowls Past

Pittsburgh Steelers quarterback Terry Bradshaw was waiting to come out of the tunnel before the biggest game of his life.  He was in his homestate of Louisiana, which helped calm the butterflies, but then saw a man being carried on a stretcher into an ambulance.  It was a fan who Bradshaw later learned died of a heart attack.  All Bradshaw could think at the time was that he had heard the Super Bowl was life and death, but now it really hit home...

In 1974 it finally happened.  Every football god who had plotted against the Steelers for 40 years somehow took a change of heart.  Every star that was aligned against us had shuffled into a new galactic position.  Every Wicked Witch of the West turned into a Glynda.  It was going to be our turn.

It began with the January NFL draft.  Never prior and not since has any NFL team ever had a draft like the 1974 Pittsburgh Steelers.  From the first five rounds, Lynn Swann, Jack Lambert, John Stallworth and mike Webster are all in the hall of Fame.  The second-best draft, whoever you may care to argue, can only claim two Hall of famers at best.  Undrafted free agents included safety Donnie Shell and tight end Randy Grossman, huge contributors of the future.

More good news came when the NFL players decided to go on a strike.  The strike would cripple preseason training camps, but it did not include incoming rookies.  One veteran Steeler came into camp despite the strike, quarterback Joe Gilliam, who was drafted two years earlier but now desperate to become a starting player.

So while the rest of the league was going through the motions with makeshift training camps, the Steelers were practicing with high-caliber football players at almost every position.  Their preseason had meaning and impact.  When the regular season began, the Steelers hit the ground running.  After eight games they were 6-1-1.  Joe Gilliam started the first several games at quarterback, but erratic play cost him the job.  Terry Bradshaw eventually caught up to speed and toward the end of the season, the job was his for keeps.

The Steelers finished the season at 10-3-1.  They pummeled O'J. Simpsons' Buffalo Bills, 32-14 in the Divisional Game, then went out to Oakland and beat the Raiders, 24-13, to earn a trip to their first Super Bowl.  Throughout those first 16 games, the Steelers gave up more than 17 points only twice, and neither time lost the game.

New Orleans was the site of Super Bowl IX.  The date was January 12, 1975, a cold, windy and rainy day.  This would have been advantageous for a team from Pittsburgh, except the opponent was the Minnesota Vikings, a team accustomed to playing in worse weather.  What was advantageous was the presence of Steeler Nation in New Orleans.  The players noticed all the rabid Steelers' fans on the streets of the French Quarter and more importantly, in Tulane Stadium.  It felt like a Steelers' home game, black and gold everywhere.  The players fed off the energy that was all around them. 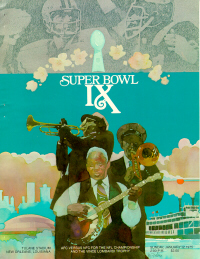 One player who wasn't feeding off anything was defensive end Dwight White.  The Steelers arrived in New Orleans one week prior to the game.  White immediately checked into a hospital with pneumonia.  He tried to attend a function during the week, but checked right back into the hospital.  He finally was released on the morning of Super Bowl Sunday, badly underweight.  White not only played in the game, he proved to be a major factor.

Dad and I drove to Akron to watch the game with brother Bill.  It would be the only Super Bowl we would ever watch together, so I am glad we took advantage of that opportunity.  What really stood out as we settled into our chairs was that a game of that magnitude would be played in poor weather conditions.  Super Bowls are always played in the sunbelt or in domes.  This particular championship would feature players on the sidelines donning heavy capes while the spectators wore winter jackets.

I have never seen a defensive line dominate a football game, on the grandest of all stages no less, like the Pittsburgh Steelers that day.  Ernie Holmes was in the backfield all day throwing people down for lost yardage.  L.C. Greenwood batted or tipped at least four Fran Tarkenton passes.  Joe Greene recovered a fumble and intercepted a pass from the defensive tackle position and Dwight White, in the hospital all week,  recorded a safety, scoring more points himself than the Vikings' offense would score the entire game.  Minnesota would gain just 11 yards rushing in the first half and only half that many in the second half.  It was almost unbelievable.

Nonetheless, the game was in doubt until just three minutes left to play.  The first quarter was played in Minnesota territory, but Roy Gerela missed his first field goal try and a bad snap aborted his second attempt.  Minnesota's defense, while giving up yardage, kept the Steelers off the scoreboard.  The Purple People Eaters were a prideful bunch in their own right.  They had gotten to the Super Bowl four times in less than a decade and are still acclaimed as one of the best defensive lines of all time.

Jack Lambert, the rookie middle linebacker who broke his way into the starting lineup, had to leave the game late in the second quarter after badly spraining his ankle.  The Steelers replaced him with a fellow named Ed Bradley, who the Vikings called "turkey."  Bradley had the game of his life, playing so well that the Steelers, and this sounds sacrilegious, didn't miss Jack Lambert.  After the game Steelers' Coach Chuck Noll, not one for issuing glowing praises, said "Bradley was beautiful.  He made big hits and big plays."

When halftime came, the score was Pittsburgh 2, Minnesota 0.  When was the last time you saw that halftime score?  In the third quarter Pittsburgh took command right away.  Gerela's opening squib kick was fumbled and recovered by the Steelers' Marv Kellum, another 1974 undrafted free agent with the benefit of preseason training.  Franco Harris busted a couple runs, the second into the end zone from nine yards out. 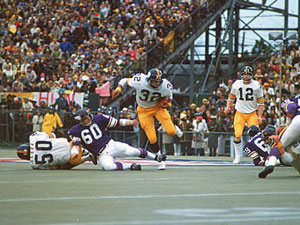 Taking a 9-0 lead into the fourth quarter, the way Pittsburgh's defense was playing, would seemingly allow Steelers' faithful to breathe easier.  Not for long.  Minnesota's Matt Blair blocked a Bobby Walden punt and his teammate, Terry Brown, recovered in the end zone for a Viking touchdown.  Fred Cox botched the extra point, but the score was now 9-6 and the outcome very much in doubt with a full 10-minutes to play.

On the ensuing possession, Terry Bradshaw came of age.  He orchestrated a seven-minute drive featuring a long pass to Tight End Larry Brown, a bust up the middle by a healed Rocky Bleier and finally a four-yard rollout touchdown pass again to Brown.

The Vikings trailed 16-6 with a little over three minutes to play and were desperate.  Quarterback Fran Tarkenton tried to hit John Gilliam deep over the middle, but Pittsburgh safety Mike Wagner played the pass perfectly.  He stepped in front of Gilliam and intercepted the ball.  Game, set and match. 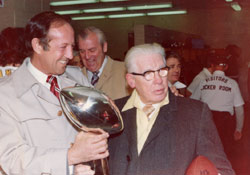 Franco Harris ended up with 158 yards rushing, a Super Bowl record at the time, and was the game's Most Valuable Player.  Art Rooney, Humble as ever, accepted the Lombardi Trophy from NFL commissioner Pete Rozelle in the locker room afterward.  Rooney's sons, in a touch of class unsurprising, waited outside the locker room so that their father could receive the trophy alone. The mantle of the grand patriarch of the NFL would never again be bare.  Dad and Brother Bill had waited longer than I, especially dad, but the wait was over. 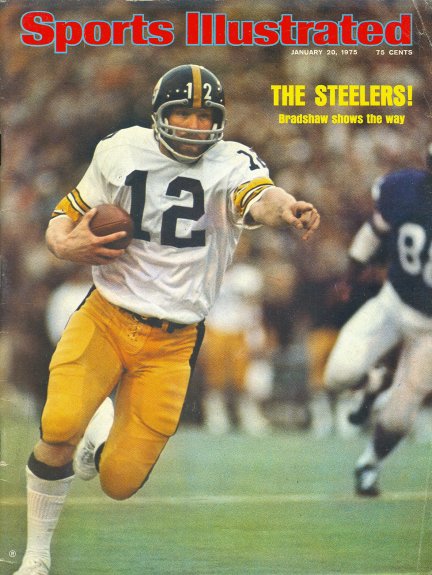