IX-The Carolina Panthers cut defensive tackle Ra'Shon "Sonny" Harris who was the Steelers 6th round draft pick from 2009.  Sonny Harris looked very good in his limited playing time in the preseason and many Steeler fans (especially datruth4life) were disappointed when he was released due to the roster numbers.  I can't really find any reports on why Sonny was cut from Carolina other than Carolina wanted to have a veteran DT on their squad due to numerous injuries, so they signed Hollis Thomas, and released Harris.  I didn't think Harris really fit the 4-3 mold anyways and I am hoping he is signed to Pittsburgh's practice squad, and soon.

X-The Stanley Cup and the Lombardi Trophy were on display today from 8am until noon at the portico of the City-County Building in downtown Pittsburgh.  If you were lucky enough to get to see them you hopefully you were able to snap a picture for all of us out-of-market fans.  Also, speaking of hockey, can you believe the NHL season begins tonight and the Penguins actually face off tomorrow evening for their season opener at home against the New York Rangers.  Be sure to check out Pensburgh for the latest Penguins news and notes.

XIII-Scout.com is compiling a list of the top twenty rookies each week and Pittsburgh has a rookie in the top twenty for probably the first time in a few seasons.  When was the last time a Steeler Rookie contributed enough in his rookie season to be considered one of the top rookies?  Anyways, it should come as no surprise after his 100+ yard performance against the Bengals that Mike Wallace is starting to gain some national attention.

XIV-So ya, umm...Casey Hampton is gonna be naked in an upcoming issue of ESPN the magazine.  I'm gonna let you insert your own joke here and just remind you what you can expect from this sex-symbol. 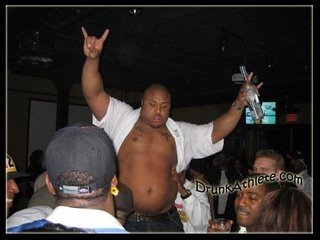 XL-The Ben Roethlsiberger civil suit made some headlines yesterday when the judge in the case denied the motion to dismiss the case that was filed by Roethlisberger's attorneys.  According to what my pea-sized brain is able to get a handle on this is really a non-issue.  Roethlisberger's legal counsel seemed to know that they didn't have enough ammunition to have the case dismissed, but it was more of a legal tactic to sway the court of public opinion.  For a pretty compressive view of the case check out Mike Florio from profootballtalks' views.  Also Roethlsiberger is part of another civil case involving the casino and resort Harrah's.

XLIII-Power Rankings are stupid but I still am obsessed with looking at them but usually only do so after a win.  The guys over at Bolts From The Blue have compiled a pretty comprehensive look at a bunch of power rankings from different sources.  The Steelers have taken a pretty hard fall and are ranked as low as 17th on some rankings although at least one list has them ranked as high as 7th.