Share All sharing options for: Pittsburgh Steelers Hold Off Detroit Lions And Improve To 3-2 - Offensive Review

I wrote after the loss to the Cincinnati Bengals that there was no need to panic; that the landscape and narrative of the NFL season changes every four games. Well, two games later - two victories later - and the Steelers are right back in the thick of things in the AFC North and the AFC Wild Card picture. Perhaps more importantly, the Steelers have not suffered any more major injuries (at least, I hope so. Aaron Smith update?) The Steelers have also improved significantly in facets of the game that they were struggling with to start the year - most notably running the ball, getting pressure on the quarterback, and holding on to leads in the 4th quarter.

Some off-hand notes about yesterday's 28-20 victory at Ford Field, beginning with the offensive side of the ball.

* Let's start with Ben Roethlisberger, who turned in another fine performance. Big Ben was 23/30 for 277 yards, 3 touchdowns and 1 interception. By completing 76.7% of his passes yesterday, Ben improved his completion % to 73.8% for the year. In case you were wondering, that's the top mark in the league so far this year, barely ahead of reigning MVP Peyton Manning. What's kind of scary is that the few incompletions Ben has had - a number of them have come on dropped passes.

* A quick word on Heath Miller. Last week, I wrote that it was great to see Bruce Arians and Roethlisberger look Miller's way more frequently thus far than in previous years. We all agreed it's been a positive development so far - and one that continued yesterday (Miller had 5 catches for 54 yards and 1 TD).  What people didn't necessarily agree upon is Miller's ability to make things happen after the catch. Some commentors lamented the fact that he wasn't getting many yards after the catch, and it was even pointed out that Football Outsiders metrics didn't love Heath Miller so much due to his lack of YACs. I personally have always been impressed with Miller's ability to make a guy miss with a simple side step, as well as his ability to almost always fall forward for an extra yard or two when being brought down. Yesterday, Miller showed some of that underappreciated athleticism when he took a screen pass near the line of scrimmage at the Detroit 15 yard line and scampered in for the Steelers second touchdown of the afternoon.

On a less glamorous play, Miller caught a pass out in the flat from Ben. He was faced with a Lions defender 1-on-1 with the sideline helping the Detroit player. 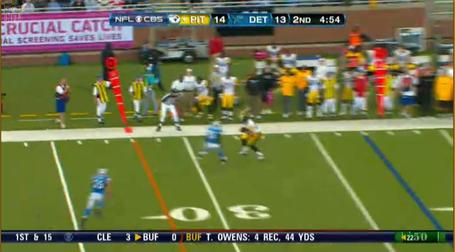 Miller fakes like he's going inside before heading to the sideline. He makes the Lions defender miss and is able to pick up first down yardage. 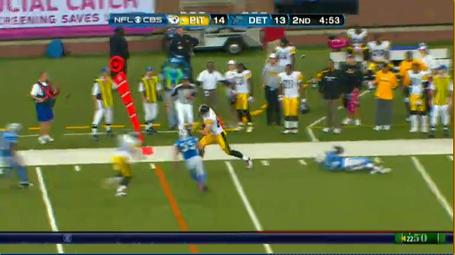 * On a similar note, can we please stop talking about Hines Ward as if his best days are behind him? Sure, technically they may be. But the guy is still playing at an extraordinarily high level at 32 years of age. And he's not just making the tough catches over the middle or using his savvy to create separation in the secondary. His 17 yard touchdown following the pick-6 by Detroit was a very impressive display of athleticism and more than enough evidence for me to continue touting his ability to be a #1 caliber wide receiver in this league for another year or two. 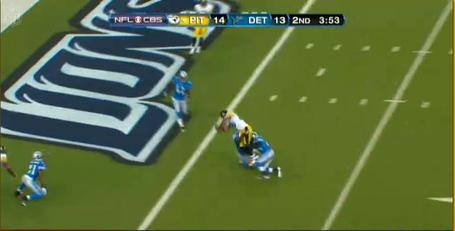 Ward's 7 catches also increased his career total to 833, good for 16th best all-time. With his first touchdown on the season, Ward also moved in to 28th place all-time with 73 career touchdown receptions. Congratulations to Hines. Keep it up!

* Let's stay on offense and with the receiving corps. Couple thoughts. One, even Mike Wallace is susceptible to mistakes. We saw that when he dropped a sure touchdown from Roethlisberger against Detroit. To Ben and Mike's credit though, the past was quickly forgotten and Ben looked his way soon there after for a 47 yard touchdown, the first of what promises to be a productive career. Good stuff. Remember though that Wallace has been able to shine because he's been given lots of early-season opportunities. To his immense credit, he's made the most of them and earned the trust of his quarterback and his coaches. As for Limas Sweed? He's not had as many opportunities to shine. Obviously he's put himself in that position by showing he may be overcome by stage fright. All I'm saying I guess is that all players - rookies, veterans, ballers and duds - make mistakes, even at this high level.

By the way, my girlfriend has decided she wants a Mike Wallace jersey. Both because he's a small, shifty, fast dude and less gloriously, because he was a teammate of Michael Oher's at Ole Miss. She fell in love with him after reading The Blind Side. Sadly, that's led her to also keep a close eye on the Ravens. Oh well, can't win 'em all.

As for Santonio Holmes -  a nice outing from him. I just re-watched much of the game and was impressed by his crisp route-running as well as his ability to get from first to fourth gear after the catch. He's really a special talent, and I think he's a lot more focused on perfecting his craft than people give him credit for.

* 21 rushes for 82 yards. That was the Steelers output against Detroit in a game that they never really trailed outside of early in the 1st quarter. To me, that's a ridiculously low total for a team coming off a huge week on the ground against San Diego. Rashard Mendenhall had just 15 of those carries. He made the most of them though, picking up 77 yards for a very healthy 5.1 yards per carry average. More on this later, but I was disappointed to see this after such a fine game last week by Bruce Arians. Obviously the Steelers were gobbling up yardage through the air, but it's hard to comprehend why the Steelers wouldn't run the ball more when leading for most of the game. Then again, many of us have complained that Arians and the offense needs to keep their foot on the gas when leading rather than trying to milk the clock. I would agree with that, but only if the running game was showing no signs of being effective. The running game was working fairly well for the second straight week though, so I don't see how that argument necessarily applies. Anyway, more on this later.

* 3 of 11. That was Pittsburgh's 3rd down conversion rate yesterday. It was their worst showing on 3rd down since the opener against Tennessee when they converted just 4 of 14 3rd downs.

* More on this throughout the week, but once again the offensive line held up their end of the bargain. Big Ben faced a little bit more pressure in the pocket than he did a week ago, but for the most part, he had time to scan the field and make solid decisions. He was sacked three times, increasing his total for the year to 13. That's tied for the 6th most sacks, but I don't think a single person would dispute that the pass protection has been infinitely better this year than the previous two seasons. It's obvious by now that we'll just have to live with a few of those sacks due to Ben's style of play, but what's really encouraging is that the offensive line is proving to be vastly improved in the running game. For the second straight week they opened up holes at the point of attack, and for the second straight week, Mendenhall hit the holes hard and with authority. Now only if he had more opportunities continue making opposing defenses stay honest and committed to shutting down the run.

To finish, a few pictures from Heath Miller's touchdown that show just how well Chris Kemoeatu is playing. He got plenty of glory last week, and deservedly so. But he, and his teammates, played quite well again yesterday as well. Here's one play where K was able to spring his teammate for a touchdown by busting his ass and hustling to the next level to put a hat on a Lions defender. 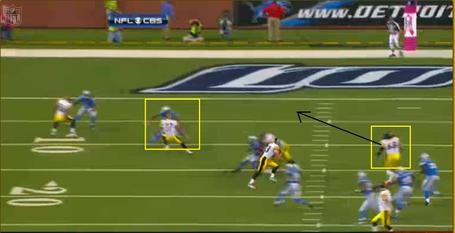 Here we see Miller side-stepping away from the first Lions defender thanks to a great block by I'm not sure who. Another great example of hustle though. Notice that Miller's path is basically wide open, particularly if Mike Wallace is able to keep his man locked up for just a bit. He's not able to though really, which makes Kemoeatu's presence down the field even more important. 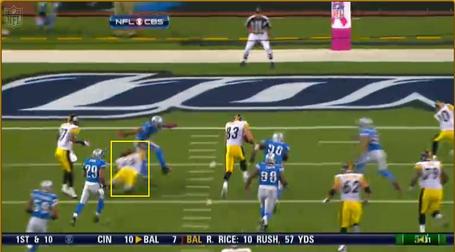 He dives just in time to slow down the Lions defender and Miller's got the inside track to the endzone. Without that hustle, Miller's taken down about the 5 yard line. Great, great stuff.

Up next: the defense.