Rather than doing my usual bullet point style posts for the review of the Steelers defensive performance against Detroit on Sunday, I thought I'd instead break down a few plays in individual posts. I wanted to start with a play in the 1st quarter that eventually led to a Lions field goal. 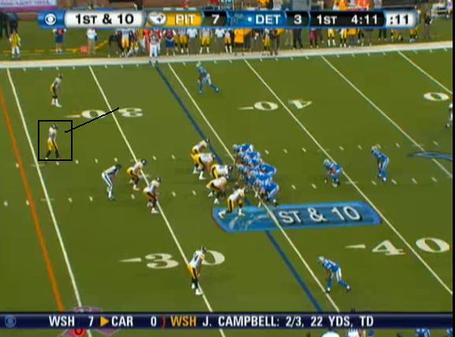 Here in frame one, we see the Steelers defense before the snap. I've boxed Ryan Clark to show that he will be shading towards his left side when the ball is snapped. More on this in a bit. Notice also how closely bunched Timmons and Farrior are in the middle. 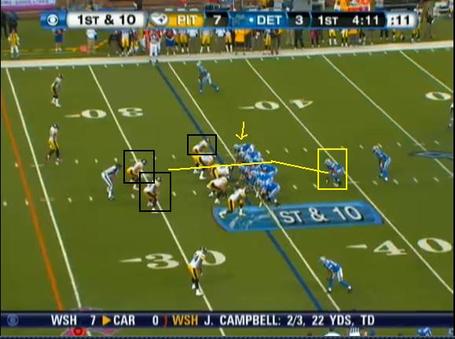 In this frame, I've highlighted the relevant players in the upcoming play. You have Kevin Smith in the backfield, who will be involved in play-action. He then goes to the line of scrimmage to make himself available for a pass. As you'll see, he takes both Farrior and Timmons with him. This ultimately leaves LaMarr Woodley responsible for defending the Jerome Felton, Detroit's fullback who will be ducking in to the line of scrimmage then sneakily heading to the seam.

More after the jump.

Now, I highlighted the Lions tight end over there to show that Woodley ultimately didn't need to worry abut him in pass coverage. Woodley looks like he's blitzing, but then drops back in coverage. Problem is, there's nobody for him to really guard due to the Lions tight end on that side staying at home to pass protect. 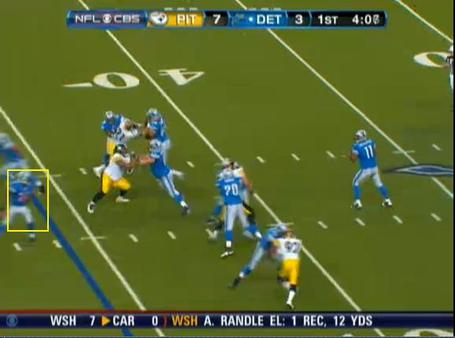 Here we see Smith freeze Farrior and Timmons (just barely out of the picture, but both shading his way) as Culpepper looks over the middle. 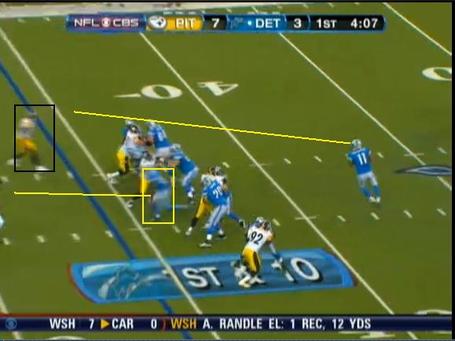 Culpepper then freezes Woodley with his eyes. Woodley's now looking that way and is abut to miss his assignment in the seam. He'll react, but it will be a split second too late. 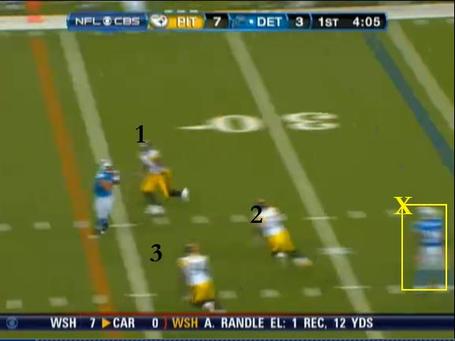 Woodley, Farrior and Timmons are all within five yards of Felton, but none are close of enough to make a play. A nice delivery by Culpepper gets the ball to him in the seam before Pittsburgh can react. Notice how Farrior and Timmons were both committed to the lone Detroit back who's serving as a perfect decoy. With Woodley out of position, they're in business. Now, if you go back to that first frame where I highlighted Clark - I did so because I though that Woodley should have been aware that he had safety help on his side where there was only one Lions wide receiver to begin with. Because the tight end didn't release, there was nobody really for Woodley to be concerned with out in the left flat where he began shading to at the outset of the play. There was one other troubling aspect of this play that I've not pictured. And that's that there was ZERO safety help over the middle of the field until Felton had rumbled all the way down inside the Pittsburgh 10. How does that happen?

Anyway, here's one example of Pittsburgh simply being outschemed and executed. It's a game of inches though. Remember that always. It's also worth noting that perfect offense always beats even the most perfect defense. We're not talking about getting smashed at the point of attack here. We're talking about a defense that is just a half step behind what's unfolding in front of them.

Finally, though it probably is overly simplistic to say that things will be better when Polamalu returns, it's apparent that the defense could benefit from his innate ability to sniff out plays before they unfold. I also think that his return will allow Dick LeBeau to unleash Woodley a bit more and ask him to do a little bit less in pass coverage - an area of the game where I think he's still got plenty to learn.