What an exciting weekend of football ahead of fans of the Pittsburgh Steelers and the Minnesota Vikings. Two of the NFL's most historic and storied franchises squaring off in an October showdown of teams with Super Bowl aspirations. I'm going to leave much of my analysis of the game for a bit later in the week, but I wanted to begin by laying out what some of the key matchups will be on both sides of the ball. From there, you all (and hopefully Vikings fans as well) jump in and lend your take(s). There's plenty of top shelf matchups in this one - both one-on-one as well as unit-against-unit.

Let's take a look, beginning with an important battle in the trenches between Minnesota's Jared Allen and Max Starks of the Steelers. 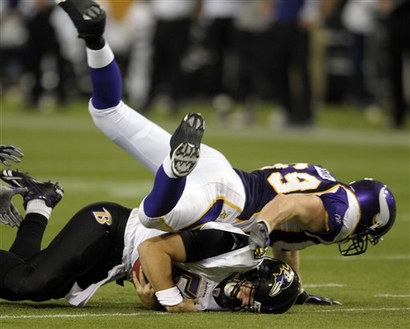 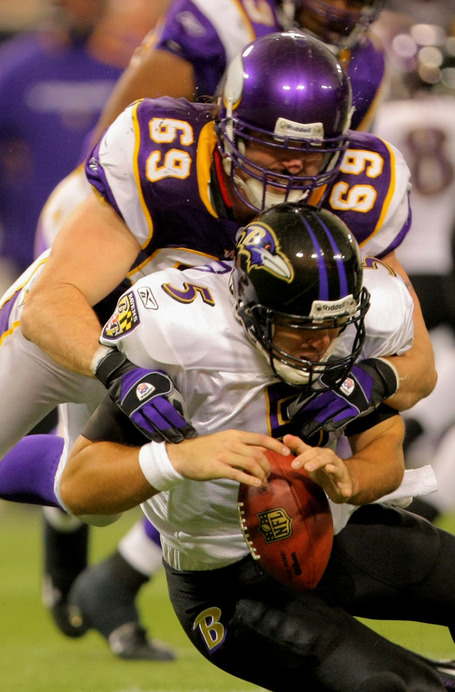 Analysis: Heading in to the 2009 season, the gigantic question mark surrounding the Steelers was whether their offensive line was going to be much, if any, better than they were a year ago when Ben Roethlisberger was sacked an ungodly number of times and the running game scared no one. Well, despite not much change in the personnel, the Steelers offensive line has improved. And not in a trivially small way either. They're protecting Roethlisberger much better this year and the result has been an amazingly productive start for Big Ben and the passing game.

Left tackle Max Starks may not face a tougher test this year than trying to keep Jared Allen off of Ben's back on Sunday. Allen, the outspoken former binge drinker turned sober defensive end formerly of the Chiefs, already has 7.5 sacks on the year. His previous two year total of 30 sacks (15.5 in '07, 14.5 in '08) has to be one of the top marks in the league over that time span. Allen is the ideal combination of strength, speed and intelligence. He can run you over, beat you to the outside with an incredible first step and tremendous balance, and he's savvy enough to know what you're trying to do to him and capable of adjusting on the fly quickly. Simply put, he's the best pass rushing defensive end Max Starks has faced all year. He's arguably the best he will face for the remainder of the season.

I can't say that I have watched and re-watched all six Steelers games this year just watching the play of the offensive line only, but from what I've seen live and and during the replays I've found time for, I've been more impressed with the play of the interior linemen for the Steelers - guards Trai Essex & Chris Kemoeatu and center Justin Hartwig - than I have been with Starks. I'd also say that I've rarely noticed Willie Colon. Isn't that a beautiful thing? What an improvement from a year ago! I wanted to see it in live games rather than just at camp and in the preseason, but I wrote before the season that it was very possible that Colon would make significant strides in 2009 and beyond. He's no All Pro yet, but the future suddenly seems much, much MUCH brighter for him and this offensive line as a result of the progress he has made. I continue to digress, but I'd also note that many of the Steelers successful running plays this year have been run to the right side of the Steelers offensive line. Some meticulous soul out there might chart them more thoroughly, but thinking back to the Chargers game in particular, the lion's share of Mendenhall's positive rushes were to the right side with the help of a pulling Chris Kemoeatu from the left.

Anyway, back to Starks. I certainly have been nothing short of pleased with Starks' play as well. Just so we're clear. I wouldn't agree with those who'd argue that Starks is the most improved player on the line. I think Starks has approached his talent ceiling, but the good news is he's proven capable of playing at a solid level consistently. I believe others along the line have better long term upside than he does, but to his credit, Starks has been the most consistent performer over the course of the past 10-15 games.

As for Sunday, I'm not sure what to say other than we'll see if he's up to the challenge on Sunday. Let's be clear - Jared Allen will make a play or two in this game most likely. He's more physically gifted than Starks and we all know that Ben Roethlisberger is more than willing to hold on to the ball and try to make a pass rusher miss while looking downfield. There just likely will be a play, or two or three when Starks maybe keeps Allen away for an acceptable amount of time, but Allen will still get to or near Big Ben due to his propensity to hold on to the rock.

Take a moment and briefly think about this year so far - you wouldn't say that Ben Roethlisberger has been under duress too frequently would you? I wouldn't, even though there definitely been plays and even series where the offensive line has gotten taken to the woodshed. Still, Ben's generally had time to make plays thanks to their work. Agreed? Well he's still been sacked 16 times - tied for the 5th most through 6 weeks. That puts him on pace to be sacked about 42 times by season's end.

Moral of the story, at least for me is that Allen's probably not going to get shut out completely in the passing game. That's fine and dandy so long as Roethlisberger protects the football if/when Allen does get by Starks. As we've seen, we already give up a healthy number of sacks and our offense is still faring pretty well. So it's not as if the Steelers can't overcome a 2 or even 3 sack day from Allen so long as they don't result in turnovers.

No small task though. Allen has three forced fumbles on the year and 20 dating back to 2005. Think of him like Deebo in purple - equally athletic, equally disruptive, and equally batshit crazy while competing on the football field.