What an exciting weekend of football ahead of fans of the Pittsburgh Steelers and the Minnesota Vikings. Two of the NFL's most historic and storied franchises squaring off in an October showdown of teams with Super Bowl aspirations. I'm going to leave much of my analysis of the game for a bit later in the week, but I wanted to begin by laying out what some of the key matchups will be on both sides of the ball. From there, you all (and hopefully Vikings fans as well) jump in and lend your take(s). There's plenty of top shelf matchups in this one - both one-on-one as well as unit-against-unit.

We first looked at Jared Allen vs. Max Starks.

Let's now move on to another pivotal matchup - defensive tackle Kevin Williams vs. the interior offensive linemen of the Steelers (Chris Kemoeatu, Justin Hartwig, Trai Essex). Defensive end Jared Allen gets all the publicity for his sacks and entertaining personality, but it's really Kevin Williams (and to a lesser extent Pat these days) that do much of the heavy lifting for Minnesota's defense clogging up running lanes and collapsing the pocket up the middle so that Allen can do his thing on the perimeter. Collectively, they make one heckuva front-four. 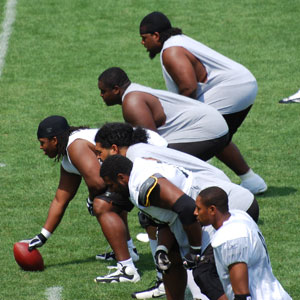 Why highlight both guards and the center when talking about Kevin Williams? Well, as one of the two DTs in Minnesota's 4-3 defense, he might find himself lined up over all of them by game's end. Justin Hartwig will have to have an outstanding game helping both Essex and Kemoeatu at various stages in the game. And when he does help out on whichever side K. Williams is shaded to, the guard on the other side will have to rise up to the challenge against Pat Williams, the other imposing tackle for Minnesota. 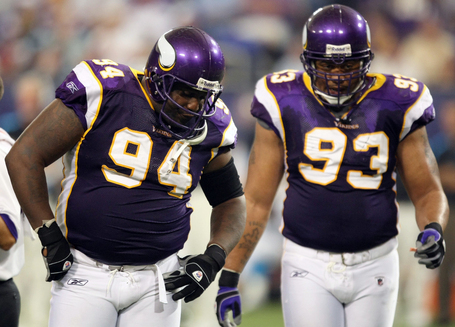 The Willaims beasts in the middle (630 pounds between the two) are as good a run-stopping duo in all of football. Since 2005 when Pat left the Buffalo Bills via free agency to sign an incredibly lucrative free agent deal with the Vikings in 2005, Vikings have consistently been next to impossible to run the ball against. After finishing 2005 with the 19th ranked rush defense, the Vikings have led the league in fewest rushing yards allowed each of the past three years.

At 29 years of age, I don't think there's any debating that Kevin is the better of the two at this point. Pat is 36 on and on the downhill side of an extremely durable, productive and long career. But he's still good enough to give an offensive line like Pittsburgh's problems potentially. It certainly helps that this one will be at Heinz Field rather than in the deafening indoor Metro Dome. I also think that Pittsburgh's big eaters up front are playing with a lot of confidence right now. I try not to quantify phantom things like momentum and confidence too often, but I will here because I think it's imperative for an offensive line to be confident - at least mentally confident that they know the assignments of each and every position along the line. It's a lot easier to hold your own down there I'd imagine if you're at least not wasting precious time and focus thinking about your assignments.

Will the Steelers be able to get the run game going against the formidable duo in the middle? It's possible, if only because the Vikings might game plan predominantly for the Steelers passing attack while hoping/assuming that the Williamses will be able to clog running lanes well enough on their own. Perhaps more importantly, the interior of the Steelers offensive line must hold up in the passing game. The Steelers have struggled the most when the pocket has collapsed up the middle (think Tennessee and Philly games last year). And they've not generally been great against 4-3 defenses featuring two forces at defensive tackle. Will they be up to the challenge on Sunday of taking on one of the game's very best defensive duos in the trenches? We will see. Can't wait!