In Blitzburgh's excellent summary of last Sunday's game, the following stuck out to me:

William Gay had 8 tackles on Sunday, increasing his season total to 30. Only James Farrior, Ryan Clark and James Harrison have more tackles. In case you were wondering, I don't necessarily think this is a good thing. I tip my hat to Gay for playing hard and for making some nice plays in each of the Steelers first seven games, but there's no doubt in my mind that he's the weak link not only in the team's secondary, but the entire defense as well. Teams are going right at Gay most weeks, hence the high tackle totals. And they're definitely making him pay when he gives his man too big a cushion. I don't have the exact total on me, but there were at least four or five plays where Favre quickly slung the ball out to the wide receiver that Gay was defending 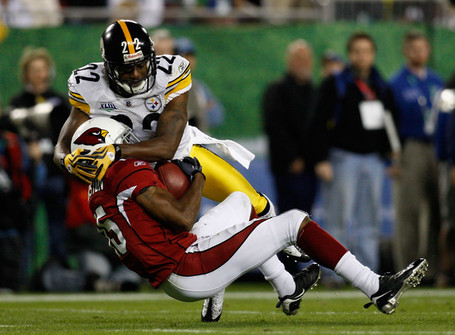 Another tackle he shouldn't have had to make? (via zimbio.com)

Gay's stat line for the game: 9 tackles (8 solo) with one pass defensed.

I thought I remembered Gay with some bad plays, but I really thought I remembered some pretty solid ones, too. In the interests of truth, justice, and the american way, I decided to go through and watch all the plays he was involved in. The play-by-play with my notes follows after the break.

This was a good play by Gay - he diagnosed the situation correctly, and came up to help make the tackle.

On a long passing down, Gay closed quickly and made an excellent shoestring tackle. Good play.

Not so good - there appeared to be some miscommunication or hesitance between Gay and Taylor as Harvin and another receiver crossed each other. Still, he gave up the 1st down to his man, and it could have been more had Favre hit him in stride instead of about 2 inches off the ground. Bad play.

This was the infamous hesitation on the cornerback blitz - it's possible that Favre would have still gotten the pass off if he hadn't stopped for a split second, but probably not. Bad play.

Gay was lined up nearly 10 yards off the LOS, and gave up the easy 1st down on the screen pass. I don't know if you blame LeBeau or Gay here - the game plan definitely seemed to be to keep everything in front of the D, and you give up a lot of the short stuff that way. Even if Gay had instantly diagnosed the play and flown up like Troy, you're probably talking 3rd and inches, with AP in the backfield. Call this one a wash.

Berrian missed the catch with Gay about 4 yards away - probably an 8 yard gain if Berrian comes back for a poorly aimed Favreball. Lucky play.

Gay keeps his head in the play and gets off a block in time to help Clark save a TD. Good play.

Good diagnosis and a good tackle on another screen - good play.

On a deep pass that would almost certainly have gone for 6, Gay does an excellent job of staying with the receiver and turning around and making a play on the ball - no defensive pass interference, and a good play at a crucial point in the game.

On a quick snap against an unprepared defense, Gay does a good job of reacting and making the tackle instantly - good play.

Another play with a big cushion - Gay makes the tackle and doesn't allow Lewis to make any YAC - good play.

Gay helps make a very important special teams tackle on an excellent returner who had just busted one for 6. He was first to Harvin, and stopped him in the open field, allowing others to come in and help him clean up. GREAT play.

This was a practically a hail mary by Favre, though well thrown - coverage was all Townsend, Gay would have only been good for clean-up. This was a wash to slightly bad on Gay's part.

By my count, Gay's record on the day was 8-3-2 - 8 good plays on the game, 3 bad plays, and 2 meh plays. Yes, he was getting targeted a lot - that happens when you're starting opposite "face me" Ike Taylor. Overall I thought he did a decent to good job, considering the coverages he was assigned. Best of all, he really seemed to step up his game after a somewhat shaky start. It may be fair to call Gay the weak link of the entire defense, but only because the rest of the D played an outstanding game. (Ike Taylor certainly gave up a few passes himself...) I would welcome any and all comments - I don't hold myself up as any tape watching expert, but this is what I saw.

I went back and watched all plays of over 5 yards where Gay is not listed in the play-by-play to look for missed tackles. I didn't bother watching the last garbage time drive. (started with 1:00 left in the 4th)

This was a missed tackle by Gay that would have held Berrian to a 4-5 yard gain.

This was the infamous trucking by Adrian Peterson. He did make an effort to grab AP's legs after getting creamed, so points for effort there I guess.

With these two additional plays, put his record at 8-5-2.

What do you think of Willie Gay's performance last Sunday?