Share All sharing options for: With Visions of Hall of Fame, Hines' Sight is 20-20

Most of Steeler Nation already believes that Hines Ward has earned his way into the Pro Football Hall of Fame.  Outside the Nation, the ballot box is not so stuffed.  In fact, you'll find many who debate that more work needs to be done.  I have been in more than a few cat fights with rivals who hate us, hate Ward, and refuse to give Hines his due.  So be it for the moment.  Their time is running out. 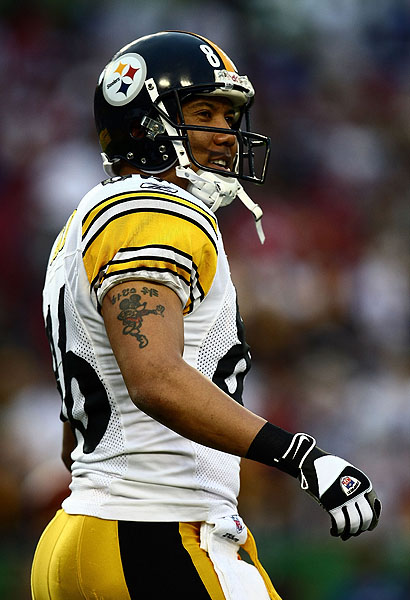 There is no question that the recent metamorphosis of the Steelers' offense is helping Hines Ward prove to the Doubting Thomas's that he belongs.  Thus far this season, the line has raised its level of play to become adequate in the run game and "above the line" in pass protection.  Rashard Mendenhall seems to be the perfect running back in the system; a little size, a little speed, a little quick, able to block the blitz and able to catch out of the backfield. Heath Miller is having a blast, Tone is making first downs and Ben is having the time of his life distributing the ball all over the field.  Together, everybody is eating.

Perhaps no one is enjoying the offense coming of age more so than Hines Ward, who might be putting the finishing touches on his Hall of Fame discussion.  Though quiet this past weekend, Ward is leading the NFL in receptions covering 20 yards or more (10), is second in receiving yards (602) and is fourth in total receptions (42).  Ward is lingering on several NFL career receiving lists that, with reasonably modest acceleration, could put him on the very highest level of all-time NFL receivers.

There are only five players who have passed the 1,000-catch milestone.  Ward stands at 842 and can join that list with reasonable expectation. He has 74 touchdown receptions and 10,382 receiving yards. Fifteen more touchdowns and 1,800 more yards put him in the top 10 in both of those fraternities.  If those things happen, the discussion ends.

But let's take a look at the here and now, and compare Ward to receivers already in Canton.  It is not fair to go back far in time, since the game has changed so much.  Don Hutson dominated his position every bit the way Jerry Rice did the same, but Hutson's numbers are a far cry from Rice's due to the way the game has evolved.  Thus, let's just compare Ward to the six Hall of Famers who have retired since 1985.

Only Steve Largent has more TD catches (Ward will pass Lofton any day now), and Ward has more receptions than Largent.  Of course, Ward is not only "competing" against those already inducted, but also with six other active players (below) who will have lobby groups of their own.

Looking at this list, Ward is already ahead of Derrick Mason and Muhsin Muhammad.  He is also younger.  It is a no-brainer that Terrell Owens and Randy Moss will pose for the bust.  That leaves Isaac Bruce and Torry Holt, teammates for many years, who are right there with Hines.  The third group (below) are those receivers who are not in the Hall, no longer active, but have numbers that deserve some level of discussion.  There are 10 in this bunch.

First off with this list, remove Jerry Rice.  He gets his own wing.  Tim Brown, Chris Carter and Marvin Harrison have also earned a ticket.  Like Owens and Moss, if you catch 100 touchdowns and surpass 10,000 yards, you should go straight to the Hall without passing go or collecting $200.

Looking at the whole ball of wax, those already in and those still playing or retired with discussion numbers, Ward has three intangibles also in his favor, none of which should be taken lightly.  First, he is an unquestioned leader.  Not all elite receivers are leaders.  In fact, some are malcontents and even peripheral liabilities.  The football world knows Hines Ward is the heart and soul of the Pittsburgh Steelers and his ballot will be reflected accordingly. 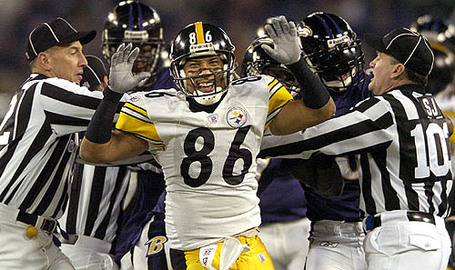 Second, it is universally known that Ward is one of the best blocking receivers, if not the best, to ever play the game.  Time and time again his blocking acumen is referred to as the gold standard.  He has elevated the notion of receivers blocking to a higher level.  The NFL has gone to the extent of changing a rule after a legal Hines Ward block.  Ask Mel Blount, when they name a rule after you (informally speaking), you have taken a piece of the game to another level.  That's Hall of Fame.

Third, Ward is a big-game player.  He has two Super Bowl rings.  Hall of Fame voters don't take that lightly.  Just ask Lynn Swann and John Stallworth.  Moreover, he is one of only six receivers in history to have achieved a Super Bowl MVP.  Only franchise mates Lynn Swann and Santonio Holmes, in addition to Fred Belitnikoff, Jerry Rice and Deion Branch, join Ward in that elite fraternity.

Best of all, Ward is only 33 and a half years old.  He is proving this season that he has a lot of gas in the tank.  The best may be yet to come.  And for all of the non-believers and Ward bashers, get your licks in while you can.  Your time is running out. 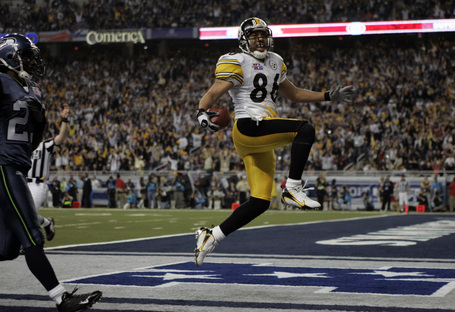