Another Reason to Argue for Hines Ward's HOF Candidacy

Share All sharing options for: Another Reason to Argue for Hines Ward's HOF Candidacy

Earlier this week, maryrose blessed us with this excellent post on Hines Ward's growing claim to HOF consideration. The only thing he did not highlight in that post was Hines's excellent ranking in terms of playoff receiving stats. I had written this post a couple of weeks ago (and drinkyourmilkshake linked it in a Six Pack), but Blitz and I thought it would be a good followup to 'rose's fine piece. Hope you enjoy it as much as I enjoyed maryrose's.

Many Pittsburgh Steelers fans are already convinced that Hines Ward deserves to be inducted in the Pro Football Hall of Fame when he retires. Currently, in his 12th season in the NFL, he is ranked 17th in career receptions, 31st in career receiving yards, and tied for 28th in career receiving TDs. Some would, and have, argued that he doesn't have HOF worthy statistics, and you can't just say he should be in because he is the greatest blocking receiver in NFL history. If he retired today, and that were the extent of his accomplishments, I would agree. But, he should play another 3 or more years, including this season. Currently, he is on pace for about 100 receptions and over 1400 yards this season. Although he has yet to catch a TD pass this year, based on his productivity in past years, it's reasonable expect at least 5 receiving TDs this season. Those numbers would put him at 11th in career receptions, 22nd or 23rd in career receiving yards, and 22nd or 23rd in career TD receptions. Just a couple more years of what would be mediocre production for Ward would put him in the top 10 in every receiving category.

I think that those numbers would be enough to get him in when you consider his other accomplishments: 2 Super Bowl rings (more to come?), a SB MVP, and a rule named after him. When the NFL Network announced the most recent round of HOF candidates a couple of weeks ago, they had two HOF voters on the show. One said that she believed that a major consideration for whether a player is HOF worthy is whether you could tell the story of the NFL without them or not. I think it's clear that you cannot tell the story of the NFL without Hines Ward. His blocking down the field is so physical that they had to change the rules because of the hit he put on Keith Rivers in the 2008 season, breaking his jaw. The hit was legal then. Anyway, that was a long introduction to get to my latest piece of evidence in favor of Hines Ward being HOF worthy. 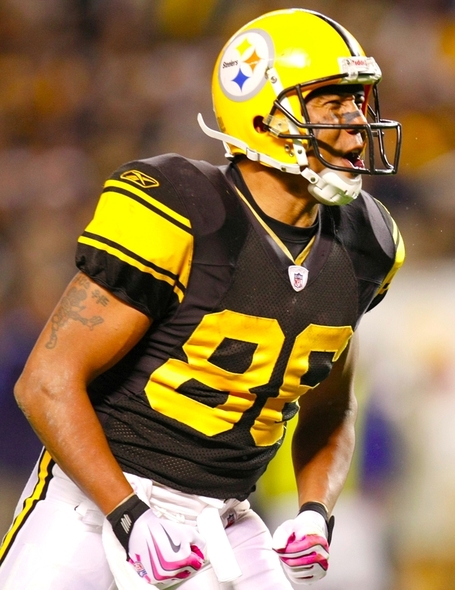 Over at Pro-Football-Reference.com, they have added an awesome new set of tools under their Play Index page. Under the Player Game Finder, you can run queries for a variety of lists, but the one that interested me the most right now is query that allowed me to list all players with greater than 1000 career playoff receiving yards. This just happened to show the top 10 WRs in playoff receiving yards.

As we can see, Hines Ward is one of only 10 WRs in NFL history with over 1000 receiving yards in the playoffs. He is 8th on this list, and that is with the fewest number of playoff games played. As you can see here, he is also tied for 8th in playoff TD receptions. And, here you see that is tied for 4th in playoff receptions. He also compares very well with these players in terms of yards per game, ranked 3rd:

And, in receiving playoff touchdowns per game, ranked 4th:

But, considering this list, I don't think that's a knock on him. Anyway, for Hines Ward to be included in this list shows that although he has not put up the monster numbers of some of his contemporaries, like Randy Moss and Terrell Owens, he has been extremely productive in the playoffs for the Steelers. As Terry Bradshaw, Lynn Swann and John Stallworth can attest, the playoffs are where you really make your mark on the NFL, unless you're Dan Marino, throwing for numbers nobody thought possible at one time.

Add to this the fact that it's highly likely that Hines Ward would have higher receiving totals if he had played on a team that threw the ball more in his career, and his Hall Fame credentials are very solid in my mind. I may be a homer here, but I do believe that the accomplishments and playoff numbers support it very well.