To The Pictures - Steelers Offense Dominates Banged Up Chargers Defense

Share All sharing options for: To The Pictures - Steelers Offense Dominates Banged Up Chargers Defense

What an offensive performance put on by the Pittsburgh Steelers last Sunday night. The running game finally showed up, much to the delight of us fans.  If we can keep that up, we'll be as good and diverse an offense as any in the National Football League. I wanted to take a look though at some of the still shots from the passing game. Now, granted, San Diego is not the toughest defense in the league by any stretch of the imagination. Even when at full strength. Fortunately for us, the Chargers were banged up in addition to not being all that talented nor matching up very well against us defensively.  Nevertheless, these are NFL defensive backs. What the Steelers wide receivers did to them though on Sunday night - which was basically to turn them completely around all game - was a thing of beauty, and in my opinion, a sign of Bruce Arians' prowess designing effective passing plays when the quarterback protection is holding up. Let's take a look at just how wide open Hines, Santonio and others were. 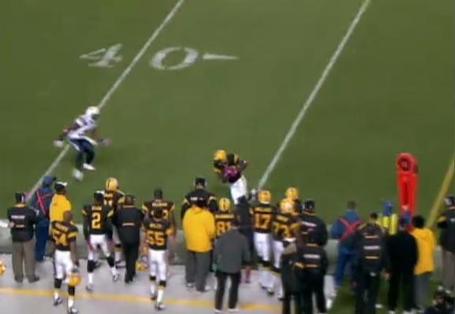 A good five yards of separation for 'Tone. 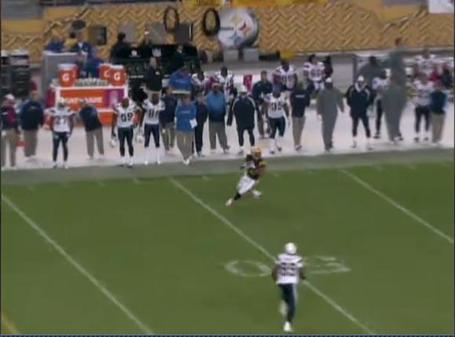 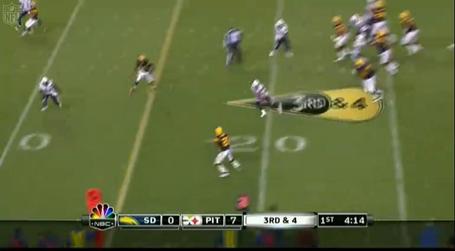 A well executed swing pass to Moore in the flat with no Chargers defenders within five yards and blocking wide receivers out in front of him. Touchdown Steelers. 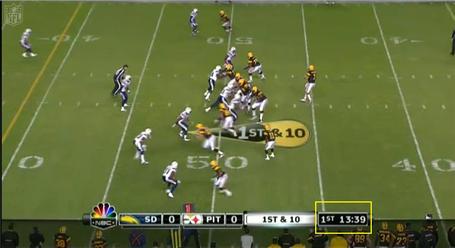 Here's that four bunch set, with Stefan Logan hanging out at the line of scrimmage. By staying at the line of scrimmage, the Chargers are forced to decide just how much or little they should pay attention to him. I boxed the play clock to emphasize just how much time Ben had to throw on this play. This play really only becomes effective if the pocket holds up and the three receivers going down the field can drag the hovering defenders too them, or at least half way between them and Logan. The pocket does in fact hold up perfectly and Ben's able to pump fake, look Logan's way, and basically freeze two Chargers defenders in no man's land - where they're kind of covering two or three guys, but not really close to any of them. 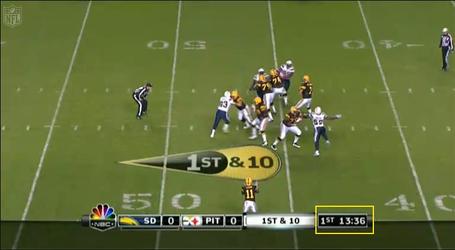 3 seconds in to the play - which is definitely around that time an internal clock is going off for quarterbacks reminding them to commit to a decision before the pocket collapses - and the protection's holding up perfectly. Ben could easily check down to Logan here, and as you'll notice, there's not really any Chargers defenders within immediate striking distance of him. He probably could have picked up a nice gain with even just one nifty move in open space.

Because the pocket's holding up so well though, Ben can look down the field for Mike Wallace or Hines Ward. 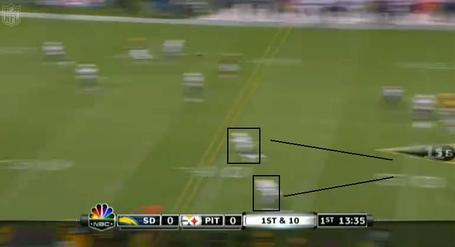 Sorry for the blurry shot, but you'll see where there's two San Diego defenders who are doing what I described above. Neither really blanketing Logan, nor dropping back far enough to pick up Wallace or Ward. 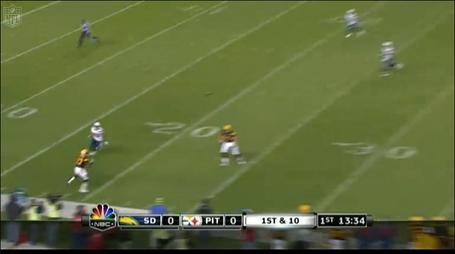 Ben's actually got both Ward and Wallace to throw to. They're a bit more bunched together than I'd imagine is optimal, but nevertheless, the lone San Diego defensive back on that side of the field is toast. A strong, decisive throw from Ben gets to Wallace before there's much San Diego can do about it.

Again, a lot of this begins and ends with getting good protection up front, but it legitimately appears as if that's the trend for this year's offense. The offensive line is really holding up their end of the bargain, and it's making Ben Roethlisberger and Bruce Arians look very good. Now, let's just keep it up against better competition and away from Heinz Field, and all will be well with that facet of the team. For a night though, congratulations to the offense for the lopsided beat down they put on San Diego's defense. 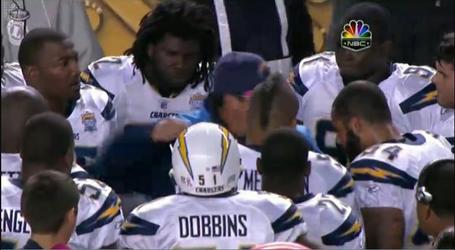 All the yelling in the world wasn't going to help one bit that night.