Yes sir! Love that performance by the Pittsburgh Steelers following their BYE Week. That's the look of a championship caliber team Steeler Nation. The following are some of my notes I took during the game, as well as some post-game reflections.

* First things first - pay attention NFL - the defending champs are hitting their stride! This is the most physical and violent team in football on defense and the offense is looking vastly improved from a year ago. For a night at least, the special teams were better as well. Could spell trouble for the rest of the league if the Steelers continue on this trajectory. Very, very convincing win on the road and lots to be excited about if you're a Steelers fan.

* I'd like to start by giving William Gay some credit for improving his game in the 2nd half. The Broncos came out throwing right at Gay's man, Eddie Royal. And they did so successfully. Royal caught the first three passes thrown to him, making opposing quarterbacks 30-of-42 throwing at William Gay. That's not going to cut it. But Gay, to his immense credit, responded nicely from that point on. He would have had an interception if Troy Polamalu hadn't crashed in to him on the drive where Denver got their lone offensive points of the night, a field goal. Gay also had a nice break up of a potential Jabar Gafney catch on a big 3rd down in the 2nd quarter. Then, in the 2nd half, Gay and the whole Steelers defense exposed the Broncos offense for what it is - nothing special. 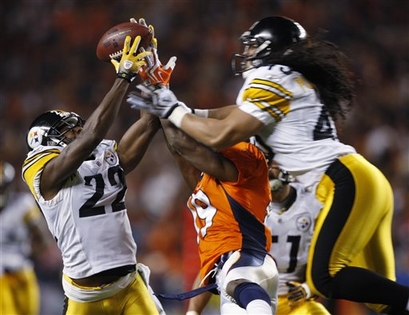 * One of the key moments early in the game was when Ike Taylor had an outstanding tackle on Brandon Marshall on a 3rd and short play. The Broncos were having a little success offensively in the first half, and a first down there would have kept a drive alive inside Steelers territory. Taylor stood Marshall up though and the Broncos were forced to punt.

* Mitch Berger ladies and gentlemen! The guy hasn't changed a bit since last year. Berger had 7 punts and averaged just 38.6 yards per kick. His shank early in the game got the Steelers out of the shadow of their own goal line and swung the momentum ever so slightly early on. That was helpful. Thanks Mitch. Daniel Sepulveda meanwhile had one of his best game as a Steeler. He had 5 punts and averaged just 44.2 yards per punt - not an astronomical number by any means. But all of his kicks after his first awkward attempt that actually took an amazing bounce for him were clean, high hang-time kicks that limited Eddie Royal's impact in the return game. Sepulveda also made a really nice play when he pushed Royal out of bounds on one of his returns. If you get a chance to re-watch the game, keep an eye out for that play and take a look at the really impressive closing speed he displayed on that tackle. Not that it matters - he's paid to punt - but it was still good to see.

* At $1.01 million dollars, Tyrone Carter is one of the best 'bangs for the buck' on our roster. Congratulations to him on a monster game playing for Ryan Clark. Carter had two interceptions, returning one back for the first touchdown of the game. It was awesome seeing Clark congratulate and celebrate with Carter after both his big plays. That's what Steelers football is all about. By the way, I hope the front office can find a way to squeeze out a deal this summer with Ryan Clark to keep him around for at least another couple of years. This guy's clearly a warrior and team player. And he still has some good football left in him. 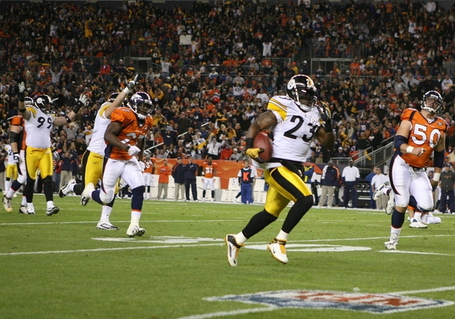 * Speaking of the secondary, quick shout out to Ryan Mundy for making his first big play as a Pittsburgh Steeler. The situation - Denver's ball facing a 3rd and 5 from their own 30. It's late in the 3rd quarter with Pittsburgh having taken control but not quite in the clear with the score just 14-10. Orton throws it complete to Brandon Stokeley, and with the help of Deshea Townsend, Mundy stood up Stokeley a yard shy of the first down marker. Bigtime play that played a big role in why the Steelers offense was on the field for so much of the 2nd half.

* James Harrison is the most violent player in the National Football League. He's a clean player, which is a great thing. But man oh man, he's a total beast out there. The thought of getting lit up by him in the middle of the field is absolutely horrifying. I wouldn't be surprised if Correll Buckhalter sustained a concussion on that play late in the game where Deebo rang his bell on that errant throw by Orton.

* Speaking of Kyle Orton - you are what I thought you were - a serviceable but not very talented NFL quarterback. Orton was pretty sharp to start, but once the Steelers got in his face, we saw his limitations. He gets scared in the pocket and misfires when trying to rush the ball out before getting hit. And again we saw his inability to take shots down the field. Orton averaged just 5.4 yards per passing attempt against the Steelers - that won't get it done against the better teams in this league.

* After catching just one pass against the Minnesota Vikings, Hines Ward got his impressive statistical season back on track against the veteran-laden Broncos secondary. Ward had 7 catches for 44 yards and 2 TDs. Ward is now on pace for 98 catches, a shade under 1,300 yards and 8 TDs this season. One small note though about him that I liked from tonight - on Hines' first catch to start the 3rd quarter, he slipped after the catch, but was able to get back up by virtue of having not been contacted yet. Hines gets back up just to violently dive in to the Broncos defender for an extra couple of yards. More importantly though if you ask me, the play is the kind of play that makes it uncomfortable to play against Ward and the Pittsburgh Steelers. I love it.

The first of Ward's two touchdowns came on a perfectly thrown ball by Big Ben in to a very tight window inside the red zone. Very impressive throw by Ben and Ward jumped at just the right moment to extend and make the catch near the back of the end zone. On Ward's second touchdown, he left Champ Bailey in the dust, jumping right over him as Bailey went soft and tried to upend him rather than wrapping up. Ward skipped right over him and in to the end zone - with a smile on his face the entire time of course. 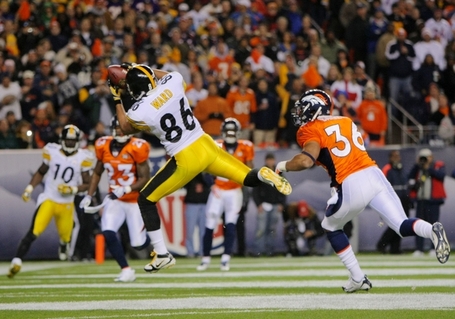 * Guys and gals, this offensive line is really turning in to a weapon. It's hard to name an MVP of a game where so many different people contributed, but I thought the Steelers offensive line was as deserving as anybody. The Broncos got after Big Ben early on and Chris Kemoeatu missed an assignment in the 3rd quarter that resulted in a fumble return for a touchdown. But other than that, the guys up front for Pittsburgh whooped Denver's 'top ranked defense.' Here was my main assessment of Denver's defense leading up to the game:

Denver's sound technically on defense, and they have savvy ball hawks and sure tacklers in the secondary, but they ain't that physical a team, particularly up front. My hunch is that will get exposed more and more as the year progresses.

Check. Pittsburgh pounded Denver in the second half, on both the ground and through the air. The running game was actually working fairly well in the 1st half, but the Steelers didn't have the ball for too much of the first 30 minutes. In the 2nd half, Mendenhall had 16 of his 22 carries. He finished with 155 yards on those 22 carries, good for just about 7 yards per pop. Give all the credit in the world to each and every one of the offensive linemen for mauling people in the running game. Willie Colon is starting to look like a Pro Bowl caliber right tackle. I can't believe I just typed that either, but it's true. He can still get better, and I think he will.  Props also to Santonio and as always, Hines, for their work blocking on the perimeter. Mendenhall got a good extra 40 yards or so of running yards thanks to their work blocking down the field.

* Mike Wallace is a stud. I'm glad we made a video of him last week. We're going to have to keep adding to it though at this pace. Wallace hauled in four more passes for 69 yards and his third career touchdown.

* Keyaron Fox played awesome tonight. He finished with a team high 9 tackles tonight and he was equally good against the run as he was the pass. Awesome performance by him - the standard of expectation does not change.

* Ziggy! Welcome to the family my man. The 2009 1st Round Draft pick didn't actually get in the stat book, but that doesn't mean he didn't have an impact. He was in the Broncos backfield all night causing Kyle 'I'm scared of contact' Orton to throw earlier than he'd like.

* Brett Keisel - you are earning every last cent of that contract extension you signed this summer. I admit I wasn't thrilled about the move at the time, but my goodness has he been a difference maker the past two games. Against the Vikings he had the strip of Brett Favre that LaMarr Woodley took back for the score. Against the Broncos, Keisel had two more sacks and just looked like a man possessed. He's always been a high motor guy, but in the past, his tireless efforts weren't always resulting in difference making plays. The past two weeks - in Aaron Smith's absence mind you - Keisel's been able to get that extra inch and finish off some huuuge, game-changing plays. Outstanding stuff from one of the team's most well-liked and hard working players.

* Troy Polamalu is just better than everybody else on the football field. At all times. His sequence of plays where he shot the gap and stopped a run on 1st down then intercepted a pass a few short plays later was classic Polamalu. The guy's a freak. So fun to watch play.

* LaMarr Woodley is starting to find his groove rushing the passer. He didn't get a sack tonight but he was in the face of Orton all night. His continued improvement - which I think definitely will happen - is going to be a key reason why this defense will be peaking later in the year at just the right time.

* 6 passes thrown to Santonio Holmes. 6 catches for Santonio Holmes. #10 is really, really tough over the middle of the field and in traffic. He's really becoming a complete wide receiver in this league -  a truly special talent that I hope stays in the Black & Gold for his entire career.

* And to close, wasn't it fun watching the Steelers close this one out with the running game? Seems like forever since that has happened but it most certainly did this evening. We'll take a closer look at the running game throughout the week, but for now, a tip of the cap to the offensive line, Rashard Mendenhall and Bruce Arians.

* What were your thoughts about this one? Should be fun next weekend! The first place Bengals travel to Heinz Field to take on the Steelers with first place in the North at stake. Can't wait!