IX-The Raven's finally get a prime-time match-up in their house this season and the Baltimore Raven's marketing department must brought in a team of marketing geniuses to think up their brilliant strategy of creating Raven's Rags.  The Raven's will give out 70,000 of the purple and white towels that will be plastered with the Under Armor logo (a sponsor), and the rags will also benefit the Wounded Warriors foundation, an organization that raises money for wounded veterans.  It's obvious the Raven's organization doesn't want a national audience seeing a sea of Black and Gold like the Bronco's and Chief's organizations learned the hard way.

X-James Walker of ESNP AFC North pulls out his list of the "AFC North 2009 All-Injury Team", and the Steelers have a few players on the squad including Big Ben, Lawrence Timmons, and Troy Polamalu to name a few.  In all the talk of the Steelers coaching staff needing their livelihoods taken from them, and the lack of hunger from the squad it is interesting to think about how many key injuries the Steelers have had this season at inopportune times.  Certainly the standard of expectation doesn't change but that doesn't mean that a lack of depth, experience, and pure athletic ability hasn't hurt the Steelers this season.  But if you feel even the slightest bit bad for the Steelers, go check out the injuries the Buffalo Bills have suffered on their Offensive line this season, and for those who like to punish themselves by watching a Theisman-esque leg break, check out this youtube clip of Eric Wood's injury from Sunday. 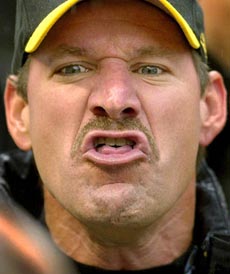 XIII-Speaking of the Buffalo Bills it looks like former Steeler head coach Bill Cowher has been contacted regarding the possibility of taking over for Dick Jauron in Buffalo.  Early reports are that Cowher isn't interested in a considering a coaching position until at least the NFL season is over.  It was also reported that the Bills are willing to offer in the range of 10 million dollars per season to "The Chin" for his services.  The Bills also scooped up some old Steeler talent yesterday by signing former first round draft pick Kendall Simmons.

XIV-In the unlikely event that Ben Roethlisberger can't go on Sunday night we will get a look at what Dennis Dixon can do in his first extended piece of playing time in the NFL.  During his senior season at Oregon, Dixon was possibly thought to be one of the top quarterbacks taken in the draft and up until a season ending Knee Injury he was having an amazing year for the Ducks.  Michael Silver of Yahoo Sports profiled Dixon before the 2008 NFL draft in which Dixon wasn't even sure he would be drafted.  If the Steelers end up clinching a playoff berth a game or two early, or god help us they are eliminated a game or two early, am I the only one who would like to see Dixon get some playing time?  In order to find out whether he will be able to fill in the shoes as a back-up QB for the Steelers next season or be used as possible trade bait down the line it will be necessary to see what what Dixon can do in some live regular season work.

XL-The Mike Tomlin press conference transcript from yesterday is up at Scout.com, and Tomlin addressed the media and sounded confident in Ben Roethislberger's chances of playing on Sunday and clarified that he was unhappy with a lot of facets of this 2009 version of the Pittsburgh Steelers.  I was initially happy with the move to bring in Donovan Woods as a scare tactic to make our group realize that they need to shape up on special team or their job is on the line.  But the more I think about it and after reading a comment by the ever-wise datruth4life yesterday where he pointed out that the Steelers have 4 guys that only play special teams, I realized it makes no sense to scare the 4 guys that only play special teams since the issue is all the players on this unit, not just the 4 that are at risk for losing their job.  It's either a lack of hunger and drive or a issue with coaching these players up to the level they need to perform.

XLIII-They might as well just give whomever is returning kick-offs against the Steelers the Special Team's Player of the week after Jamal Charles became the second consecutive player to win the award after playing the Steelers.  What a mess!