IX-While the Raven's did get a huge victory over the Steelers on Sunday, Edward Lee of the Baltimore Sun says that the five sacks on Joe Flacco in the second half of Sunday Nights game leave much to be concerned about for the heavily praised unit. Although Michael Oher had a huge movie released (Grossed 40+ million at the box office) he was brought back down to earth on Sunday night by Lamar Woodley who had another breakout game with two sacks and constant pressure on the uni-browed one. 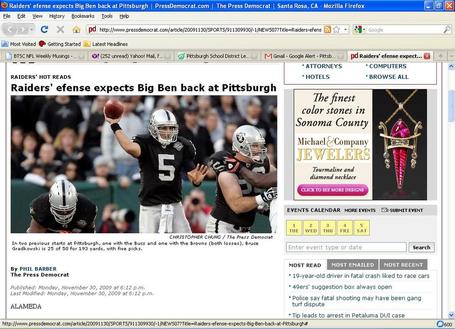 X-In preparation for the big game this Sunday the raiders have decided not to play any "D" and are fielding an "efensive unit" that is expecting Ben Roethlisberger to play this weekend.  The article also reminds me that the Steelers will be facing Bruce Gradkowski for the third time as a starting Quarterback in the NFL.   Below is Gradkowski’s stat line in the first two match-ups.

XIII- Mike Florio of Profootballtalk reports that this season could be Reggie Bushes' last in New Orleans. He is due a heavy pay increase (8 million dollar salary next season) if he stays on the Saints roster, so they will have to considered giving the former Heisman Trophy Winner the boot.  With the success of Rashard Mendenhall, it is almost a certainty that Willie Parker will not be back for another season in Pittsburgh and it could be very possible to see an new offensive coordinator in Pittsburgh next season.  If the Steelers get a new offensive scheme, although the chances are slim it would be interesting to see a player as dynamic as Bush in Black and Gold?  If you think my idea is hair-brained you should read Florio's latest theory that Big Ben will be replaced by Dennis Dixon, for good.

XIV-In a piece for the Sporting News, Mike Florio also draws some comparisons between arguably the most improved quarterback in the league right now, Vince Young, to the career path of former Steeler Kordell Stewart.  I personally think their paths are very different considering Kordell entered the league as a second round pick that was used as a utility player for his first few seasons.  Young has taken full advantage of his second life in the NFL and only time will tell if he crumbles if he faces some more adversity but all the reports of late have reported that Vince is doing all the right things to a be a solid pro in this league.

XL-Wow, the New Orleans Saints were really impressive on Monday night and could seriously make a strong run at an undefeated season this year, but this weeks match-up against the Redskins is one that I think could derail their plans.  The Saints won an emotional victory that was quite possibly one of their most important games in franchise history and they are coming off that game by playing a seriously inferior and battered Redskin team on the road.  Many times in the NFL games like this become a "trap" because it's easy to overlook an opponent after a big win.

XLIII-The Pittsburgh Steelers and the Oakland Raiders was once a marque match-up in the NFL that evoked similar emotions to the Pittsburgh and Baltimore or Pittsburgh and New England, but today it is more like playing a scrimidge.  Even though I said that I'm not that confident that the Steelers will beat the Raiders the way they are playing currently, but the Raiders are still the dregs of the NFL.  Perhaps some of the elder statesmen of BTSC could share their memories of classic Steelers vs. Raider match-ups.