Damn!  It feels good to finally win.  Everyone take a deep breath and enjoy this feeling.  As you will see in this "Playoff Possibilities" fanpost by imike29 the Steelers are still very much alive in the playoff race.  Hopefully, our players and coaches realize the only thing they can do is win and hope the rest falls into their hands.  Playoffs or not, I am happy this team kept playing despite its slim playoff hopes.  That makes me proud to be a Steelers fan.

On a side note, unrelated to Steelers and football, I would like to wish everyone a happy and safe holiday this week.  Drink, be merry, and enjoy the presence of your family.  No matter what your circumstances are, you are a wealthy man in my book if you have someone (family) that loves you.  Sorry, I'll get off this soap box now.  Happy holidays!

Statistic of the week: Only three teams in the NFL have two receivers with over 1,000 yards for the year.  The New England Patriots with Randy Moss and Wes Welker, the San Diego Chargers with Vincent Jackson and Antonio Gates, and our own Pittsburgh Steelers with Santonio Holmes and Hines Ward.  Neither of those two teams have a third receiver over 600 yards.  We have two in Heath Miller and Mike Wallace.

Another week where a lot of our defensive ranks dropped, that is not quite surprising considering the offensive slugfest we had this week that set a few NFL records.  Our pass defense took the biggest hit with a 4 spot drop and the average went up 20 yards per game.  Also, another week and no more forced turnovers.  That is starting to get ridiculous.

Obviously, after Ben's and the offenses performance most of our passing ranks increased.  And of course, our rushing ranks got worse.  The most noticeable statistic here in my opinion is that the offense did not turn over the ball a single time.  "Well that is what the offense is supposed to do!"  Well consider this, the Packers are 1st in turnover margin at +18 and have forced 33 turnovers this year (3rd).  For us to not have one dumb turnover is pretty damn impressive if you ask me.  Also, consider that Charles Woodson, a Packer CB, is in the talks for Defensive Player of the year with 8 interceptions, 4 forced fumbles, 2 sacks, and 2 defensive TDs.  The Steelers blanked him in all of those categories and they seemed to purposely throw in his direction the majority of the game.  Santonio Holmes abused him so bad that Woodson had at least 3 defensive holding calls on him that I can remember.  We must resign Holmes!!!

Notes on the Week 15 Game

Two bad special teams squared off here, hence the high average starting field positions.  I think Logan had a decent game yesterday.  A couple timely returns and no real bone-headed moves in my opinion.  Anyway, is it just me or do Jeff Reed's kickoffs seem to be getting shorter and shorter?  They all appear to be landing at the 10 yard line now, where 2 or 3 weeks ago it was around the 5 yard line.  That is definitely a huge reason why teams are winning field position against us in the last few games.

Was it a good call was it a bad call?  I remember a few weeks ago Ron Jaworski talking about on-side kicks and their success rate.  According to Advanced NFL Stats, on-side kicks have a 26% rate.  However, in our situation this is very misleading.  On the vast majority of these kicks the opposing team knows it is coming.  That allows them to put in the "hands team" and change their formation to have more players to catch the ball.  In our case, the Packers were not expecting the kick at all (who was?).  When a team is not expecting it on-side kicks have a success rate of roughly 60%.

So Tomlin believed a 60% chance was better than what our defense could offer, was he right?  The Packers had 12 drives last night.  From those, I will exclude the drive after the on-side kick and the drive at the end of the half.  Out of 10 drives the Packers punted 5 times and had 1 missed field goal.  It is my opinion, but I am counting the missed FG as a fail by the defense (Crosby failed, our defense didn't win).  Therefore, the defense had a success rate of 50%.  I am not sure if you are a poker player or not, but when you go all in you want to do that with your best hand, the hand that has the highest % chance of winning.  That is what Tomlin did and it was a good call.

Take a look at these screen caps.  Ike clearly had the space to let it bounce one more time to cross the 40.  He even had a blocker there to take care of Clay Matthews if necessary: 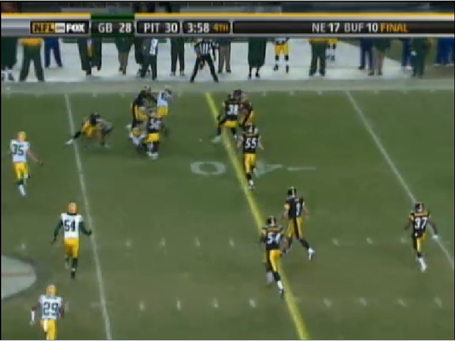 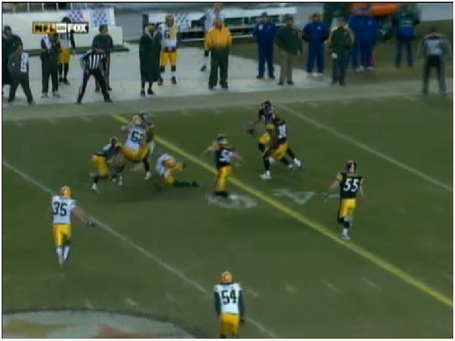 Stats That Make Me Queasy

End on a Positive

Ok, I have another Statistic of the Week, complain all you want.  The Pittsburgh Steelers are on a 5 game losing 1 game winning streak!