14 games in the books; two to go. In both conferences - but in the AFC in particular - there are far more teams clinging to playoff aspirations than there are not. Let's take a look at the current standings in each conference before we begin. For a comprehensive breakdown of the AFC Wild Card picture, including what precisely needs to happen for the Steelers to sneak in to the playoffs as either the #5 or #6 seed, read here.

Still Alive:
New York Giants (8-6)
On to some thoughts about this past weeks action as well as what awaits in Weeks 16 and 17.
* How HUGE is this Sunday's game between the Steelers and Ravens? I'll save my thoughts on the matchup for a bit later in the week, but I will say this - this is going to be one hell of a tough game for Pittsburgh to win. Baltimore's heating up at just the right time. They've won their past two in impressive fashion - 48-3 over Detroit and 31-7 over Chicago. Sure those teams are no good, but you can only beat up on who's on your schedule and Baltimore's done just that this past two weeks. They've played clean on both sides of the ball, and Joe Flacco is showing signs of emerging from his sophomore slump just in time for the stretch run to the playoffs and beyond. I'm obviously concerned about this matchup considering how beat up the Steelers are and how poorly the defense has played recently. I'm not looking forward to seeing what Ray Rice can do over the middle of the football field again. That said, nothing, and I mean, nothing would surprise me at this point, including the Steelers playing one of their best games of the year on both sides of the ball and dusting the Ravens at Heinz Field. 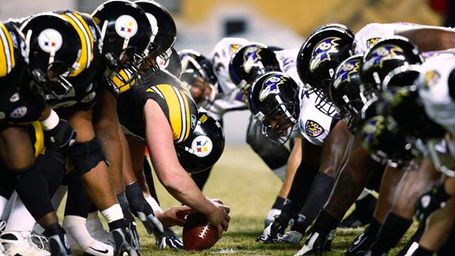 * I suppose we as Steelers fans can't say much considering our team did the same thing several weeks ago, but my oh my, you've got to be beside yourself if you are a Denver Broncos fan. Denver lost 20-19 at home on Sunday despite not turning over the football. There were several keys to the game - one was certainly Denver's inability to capitalize in the redzone. In fact, after Brandon Stokeey was caught from behind and horse-collared at the 4 at the end of a 63 yard catch and run, Denver was unable to punch it in from the 2 yard line and had to settle for 3. The score was then 19-13 and the door was left open for JaMarcus Russell and the Raiders. Hey, we made Bruce Gradkowski look like Joe Montana, but that's still not as depressing as watching Russell engineer a 10 play 62 yard drive to seriously cripple your team's playoff chances.
* Oh, Houston Texans. Each year hanging around .500, giving fans and pundits reason to think that next year is the year they'll finally break through, put it all together and maximize all that talent on both sides of the ball. The Texans remain alive with an uninspiring 16-13 victory over the St. Louis Rams. Next up is a de facto elimination game for both Houston and their opponent, the Miami Dolphins, who lost a heart-breaker in Tennessee in overtime after mounting a furious comeback to tie the game late in the 4th quarter. Vince Young lit up a usually solid Miami secondary for 3 TDs, including a beautiful 32 yard score to Nate Washington. The TD was Washington's 6th this season. Anyway, that Houston/Miami game will be a good one. In an ideal world, I think we'd like Houston to upset Miami at their place then lose the following weekend at home to New England.
* It's pretty foolish to make too many statements about the Arizona Cardinals. There's just no way to project how they are trending from week to week. Arizona got back on track with a win at Detroit, but they looked pretty darn sloppy in the process. The good news is Kurt Warner (kinda) shook off that abysmal, turnover-laden performance against San Francisco and threw for two touchdowns. (He did throw a pick and lost another fumble). Arizona improves to 9-5 with the win and head backs home for their final two games. Keep an eye on their Week 17 tilt with Green Bay. The Packers might be playing for their playoff life and that game could be a good benchmark of just how dangerous Arizona may be in the playoffs.
* Sticking in the NFC - I'm not surprised we're seeing Minnesota slide a bit down the stretch. They're a very talented and capable team. But they're not head and shoulders above the pack like their record suggested a few weeks ago. Minnesota has lost two of three and better get things on track next weekend at Chicago. I'm sure you've read about the blah blah blah regarding Brett Favre not wanting to come out of the game after continuing to take a beating from the Panthers defense. Whatever. Nothing there. For now, at least. We'll see if Favre gets a case of 'Superman Syndrome' these upcoming weeks or if he sticks to what's made him so successful this year - patiently taking what's given to him and taking timely well-calculated chances down the field.
* Very emotional week for the Cincinnati Bengals. Hats off to them for even playing just days after losing a teammate and friend. And another salute for playing so well on the road against a very good Chargers team. In fact, I'm even more impressed by the Chargers after this latest win after thinking about how the Bengals must have emotionally rallied around one another after Chris Henry's very sad death last week.
* I started my football viewing day with the conclusion of that Falcons/Jets game. When the Falcons scored their first touchdown of the game with less than two minutes remaining in the 4th quarter, I had this quick thought - 'this may just turn out to be one hell of a day." Jacksonville already lost on Thursday, despite playing extremely well against the undefeated Colts. Then we got the necessary Jets loss; then Denver lost at home to Oakland! And the Steelers stage a miraculous comeback!