Ho, Ho, Ho...I hope that Santa Clause was good to all the BTSC boys and girls, and hopefully all those Raven's fans got a lump or two of coal in their stocking.  The forecast for Sundays crucial match-up is cold with a chance of snow, but probably not until later on in the day.  If anyone is going to the game let me know in the comments or at btscmilkshake@gmail.com if you would like to meet up for some tailgating. [DYM] 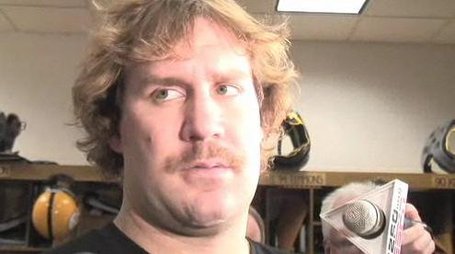 X-Ravens usual starting left tackle Jared Gaither will likely not play against the Steelers this week, which means Michael Oher will be protecting Joe Flacco's "Blind Side."  This could potentially be a big loss for the Raven's, but the guy who lines up against Oher may not be James Harrison who is listed as "Questionable" on the injury report with a bicep injury.   Along with Gaither, Ed Reed and Linebacker Tavaris Gooden are all listed as doubtful for the Ravens.  The Steelers on the other hand have listed Troy Polamalu, Chris Kemoeatu, and Keenan Lewis as "out" for Sunday's match-up.

XIII- Speaking of Michael Oher, everyone is now familiar with his life story and his time he spend at Ole Miss.  Not everyone probably knows that Oher attended college with Steelers rookie standout Mike Wallace.  Wallace and Oher are actually close friends who attended four years of college together and ended up being drafted to opposite teams in the NFL most bitter rivalry.  Oher and Wallace may not get along on Sunday but after the game they said they will remain life long friends who plan to vacation and train together in the offseason.

XIV-Those Steelers fans that have been calling for changes in the Steelers secondary have finally got their wish, although I am somewhat skeptical that inserting 75 year old cornerback Deshea Townsend in his place is much of an upgrade.  It's really stunning how much of an issue the Steelers secondary has become over the course of a year, after the steelers spent two mid-round draft picks on the secondary this offseason many assumed the Steelers were set at the position.  But it now seems very likely that the Steelers first round pick this year will be used on a corner or a safety.

XL-In the first match-up between the Steelers and Ravens' second year man Ray Rice ripped the Steelers for 155 all purpose yards and was pretty much unstoppable on third downs. The Steelers and the rest of the NFL have figured out what a talent Rice is and I would be surprised if Rice doesn't earn himself a spot on the 2009 pro-bowl roster considering he has more yards for scrimmage than every player in the league absent Chris Johnson.

XLIII-The addition of Limas Sweed to the reserve non-football illness has been a mystery since it was announced this week. Coach Tomlin's comment in his press conference this week that Limas "has our full support. Anything else I say will be in regards to protecting his privacy," makes me think it could be a pretty serious issue that Sweed is facing right now.  The one positive in the whole situation is that fifteen year veteran Joey Galloway gets his chance in Black and Gold after a lifetime of growing up a Steeler fan.