Share All sharing options for: Coming Out Of The Final Turn And Down The Stretch The Steelers "Unleash Hell"

Many thanks to RickVA for this piece on the last five weeks of the 2009 regular season.  Rick provides a lot of reasons to be excited and to believe that the Steelers can make another run in the playoffs.  [DYM]

Hard times for the Nation. Set up by the October bounce back and an impressive Monday Night steamrolling of the Broncos to roar out the Bye week and begin November, our guys then take the rest of the month off. Actually, I need to take that back. What has been so frustrating with this team is that they have shown just as much creativity to snatch defeat from the jaws of victory this year as they did doing the opposite last year. Five defeats. Three having to go to overtime in order to get the job done. The remaining two each having to go to the 60th minute. Everyone contributes it seems: the franchise QB who has calmly engineered game winning drives with less time and much more at stake loses his mind and plays mad bomber for a quick four and out to end a ball game. Our best cornerback plays a pass brilliantly, comes down on his fanny and drops the ball with no one around him. Fumbles, missed tackles, interceptions, ruinous penalties, bizarre play calling all occurring at times and in ways that professional wrestling would have a hard time trying to convincingly choreograph. And, of course, what analysis worth anything can fail to mention the kickoff returns.

The good news, at least for me, is that there has developed a certain rhythm to all this so that most of the fans that I have been hanging around see the disaster coming from a long way off. This last week being the most creative of all. Ben can't play against the Ravens. Charlie's wrist is broken. All we have left is a guy who (it seems) hasn't played seriously since Pop Warner. Oh, no. We're screwed! The entire football universe agrees on this. Even Hines loses his cool. So we psychologically innocuate ourselves. 'At least we'll see what Dennis can do,' was the most common refrain. Then Dixon scores late, plays pretty damn well if you ask me and puts us ahead with six minutes left to play. What did he have to do that for? In spite of ourselves hope rises...and then the Dagger (largely self administered).

Unfortunately, regardless of how the Steelers perform over the next month, the experience is likely to be hellish for many of our legions of fans. My late father used to have a bizarre definition of what he saw as a fair fight; "You have a gun or a knife while the other person doesn't have a damn thing." In other words, no drama. Get a strong early lead, don't let it drop beneath eleven as the sacks and other statistics pile up. We haven't had many games like that this year (perhaps Cleveland or Denver) and I wouldn't bet any significant money that we'll have many or any more. Can we make the playoffs? Can we prevail in the playoffs? Absolutely! One of the things that has made this year rather unique is that Pittsburgh has not appeared to be outmatched in any of it's games, even last week's match up starting our third string QB. On the other hand, be honest now, would anyone be shocked if we made the Raiders or Browns look like the 2008 Steelers? So, all that talk about feeling blessed, thankful and so forth that folks like myself, Maryrose, Blitz and others have been preaching is gonna be put to the test this December. A word of caution; its one thing to watch with morbid fascination how such a talented team can let victories slip through their fingers in the early fall, even November, is one thing. It will be quite another to watch a season slip away in a similar manner.

Take proper precautions this holiday season. Make sure that sharp objects and the breakables are locked away. Stock up on heart medicine, liquour, drugs, whatever helps you get through it all and enjoy the show. As for me, stubborn optimist that I am, I, like Tomlin, am a big Gladiator fan and I actually think that the guys will play to their potential at least once this year and will unleash some hell this month. Whether it can be sustained into a January run will be the big mystery. But if they could wouldn't that be glorious?

The League. Reports of Parity's demise have proven to be premature. Instead it has proven to be a season of streaks. Remember when the conversation about the strongest teams in football included the Ravens, Giants and Broncos? When we left the Titans (and Vince Young), the Jags and the Chargers for dead? The league, the networks and more than a few gullible fans will continue to promote the Cowboys as some sort of superpower as long as there remains one breath of playoff possibility in them. Shameful. I get the impression that most writers believe that other than some juggling for wild card spots that things are pretty much settled around the league. Can't say why, but the playoff landscape may likely be quite different at the end than it appears now.

Cincinnati. Surprised at the Bengal's run? So am I. So much so that I have evolved a rather far fetched theory that, nonetheless, explains the upheavel in the AFC North. I think Marvin Lewis has hooked up with some Louisiana Voo Doo woman. Sweeping us or the Ravens, okay. Sweeping both and the Browns? Suspicious. And what's going on with the Bearcats? Undefeated? A BCS candidate? Are you kidding me? Somebody check Marvin's pockets.

Pittsburgh. No comment on the whole Hines Ward issue. Much ado about nothing. But I do think there are some potential lessons and long term issues that can be discerned from the events of the past couple of days.

O-Line. This really is nothing short of miraculous. How many times was Dixon sacked on Sunday night? five months ago you could not have a conversation on BSTC or anywhere else on what ails the Steelers without the offensive line being front and center as a topic of discussion. In the national media comments are for the most part laudatory. Individuals such as Kemoautu, Starks and Colon are being described as being among the best around in their specialties. Not saying they're great. But they have been good enough to allow the Steelers to have one of the more productive offenses around. I'm interested in your thoughts about this turnaround and what accounts for it. In the meantime, kudos to a much maligned guy over the past few years; Coach Larry Zeirlein.

Ben. One thing that Sunday made more glaringly clear; the lion's share of the blame on the hits that Ben takes lies with Ben. I like Ben and he's a great player. Ben is also stubborn and is at risk of having a shortened career if he does not learn to take care of himself and, by extension, his team. The handwritting is on the wall. The league is going to have to take a more cautiously aggressive stance in relation to the treatment of concussions. Ben is in a pretty much unique position. People like comparing contact in the NFL with car accidents. Well, Ben has had a car accident already. And he hangs onto the ball too long. Is it too far fetched to imagine a doctor and other members of the Pittsburgh brain trust sitting Ben down and telling him that he will no longer be permitted to play? And that happening much sooner than later. A number of people need to help Ben get smart about this. In this sense I do believe that there is a constructive role that we as fans can play. One of those steps have already been taken when it was clear that fans were clearly against him playing against the Ravens if there was any danger that it could compound his problem. If it costs us a playoff berth or a title, then so be it. There are more important things in life for both players and fans.

Arians. Can I come back home? For the past several months I have favored a more tolerant posture toward Offensive Coordinator Bruce Arians. One play has driven me off of that particular bandwagon. Let me explain what I saw to you and if any of you can let me know if I am over reacting I would sincerely welcome the feedback.

Early in the Kansas City game Rashard Mendenhall runs the ball off right tackle on first down and gains between 7 and 8 yards. Let me explain in advance; it does not matter one bit to me whether Arians passes or runs in this circumstance. Either decision can be easily defended. What Arians did which made no sense to me is that he lined up for the next play in an empty backfield set. The defense would have to respect the presence of a runner in the backfield which would make a play action fake particularly effective...I could go on. I come to the conclusion that Arians at times through play selection, formation, etc. sabotages the running game. With how Mendenhall is performing he should be leaned on heavily in the coming weeks. My bet is it will only happen reluctantly if at all.

Mendenhall (Sweed). Mendenhall is on track to be a top tier back, assuming that they give him a chance to play. Part of the problem is trust an issue that Rahard contributed to with his careless handling of the ball. The ball handling has improved but trust takes longer to regain. Along this vein, what will it take for Sweed to gain trust? How many dropped passes would be deemed acceptable as opposed to being one more nail in his professional coffin?

Brett Keisel and Trai Essex. Two players that many if not most on BTSC seemed content to let go last spring. Keisel was initially retained after his first contract because they did not want to repeat the mistake they believed they made in letting Mark Vrabel go to Pats. Essex was the little used backup to Marvel Smith at left tackle. Fair to say that both players are having career years. Since Brett is Ben's best friend on the field and just signed an extension this spring, this is particularly good news. Essex has settled in nicely to the right guard position and is doing precisely what many had suggested they do with Willie Colon. Tip of the hat again to Coach 'Z' and to Defensive Line Coach John MItchell. 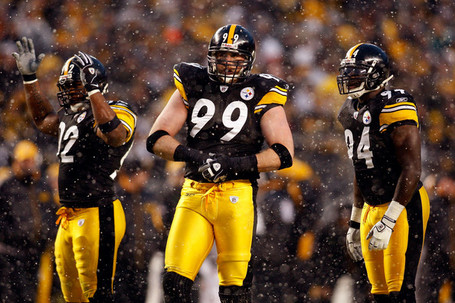 Linebacking Corps. Lawrence Timmons, particularly impressive on Sunday. Maybe because he's fully healthy for the first time this year. It also struck me as the best game for the full unit. Woodley appears to have found the form that served him so well last year. The key component of any 'unleash Hell' strategy.

Quarterback Corps. Waiting to see who will be the first to suggest that we should dump Ben in favor of Dennis. You know its gonna happen, probably already has. Next will be 'let's kick Charlie's old fragile behind under the bus'. But I will say, seriously, that it will be time shortly to begin preparing Charlie's exit strategy. Wouldn't it be nice if Batch could transition out as a player/coach? Wouldn't have to commence immediately.

I'm betting that we'll still be in the middle of things in January. Your thoughts?