IX-So the rumor started floating around yesterday that Troy Polamamlu is unsure if he will play again this season.  While I don't think this should surprise anyone, and I think their is a strong possibility that it could be true, that basis for the rumor was a comment made by Troy and he only stated that their is no definitive date for his return.  Ed Bouchette said he had heard nothing about Troy being done for the year on yesterday's chat, so it really isn't  definitive either way.  In other injury news Hines Ward and "Not So Big-Play" Willie Gay both think they have a shot at playing on Thursday, although the reports from inside the Steelers clubhouse is that both will likely miss the match-up against the Browns.

X-Want to see what Max Starks bought with his big money extension?  According to the Arizona Republic, Max Starks paid 2,050,000 dollars CASH, for a house in the Crest View neighborhood of Fountain Hills, AZ.  From a little detective work it looks like this is the house that Starks purchased which includes five bedrooms, five and a half baths, an outdoor BBQ and an infinity pool. 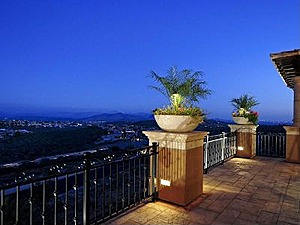 XIII-Former Pittsburgh Steeler Plaxico Burress has now been in prison for just a few months and his legal team is already seeking a work release. New York State prosecutors say the request is premature, and it would send a bad message to the public.  After Burress is completely released from prison I  I wouldn't be surprised to see Roger Goodell ask Tony Dungy to perform a similar role as he did with Michael Vick if Burress and NFL teams are interested in his possible return.

XIV->Going into the 2009 NFL Draft many Steeler fans were hoping that center Alex Mack from California University would fall to the Steelers, but ultimately Mack would end up going to the rival Cleveland Browns. This week the Akron Beacon Journal caught up with Mack who is excited by the challenge of playing against the Steelers and looks like he will be another solid piece in a young Cleveland offensive line that already includes pro-bowler Joe Thomas.

XL-How ridiculous is this entire Tiger Woods scandal?  For a guy who defines greatness with his golf game, he seems absolutely helpless right now and all because he was unable to "nine-iron in his golf bag" or at least keep it private.  How is this football related?  Well take a look at this hilarious photo of the Jacksonville Jaguars mascot dressed up to look like Tiger Woods being chased by a blond woman with a nine iron during their game last weekend. 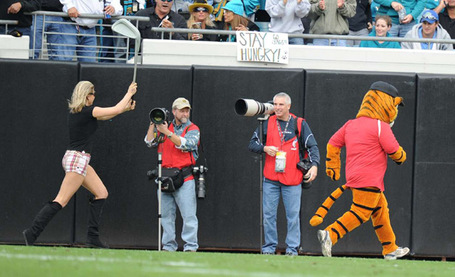 XLIII-Earlier in the season whoever was lineup at kick-returner against the Steelers was guaranteed to have a shot at winning AFC Special Teams player of the week, and Jamal Charles and Bernard Scott won the award against us. Now it seems like every offensive player has a shot at winning the AFC Offensive player of the week with the way the Steelers Defense is playing, especially in the fourth quarter. This week after throwing three touchdowns in the 4th quarter Bruce Gradkowski was named AFC Offensive player of the week, becoming the first Raiders QB since Kenny "The Snake" Stabler to win the award in 1979.  Brady Quinn, Mohamed Massaquoi and even Jamal Lewis are foaming at the mouth right now.