The Drive That Really Made Me A Believer - Part 1: Setting The Stage

Share All sharing options for: The Drive That Really Made Me A Believer - Part 1: Setting The Stage

You've heard me say by now that I felt the Steelers were in good shape to make it to Tampa as the final quarter of the season or so got under way. The win at Dallas extended our winning streak to four games, three of them over quality opponents - San Diego, New England and Dallas, with a W over the lowly Bengals along the way. There was every reason in the world to feel wildly optimistic about the Steelers chances down the line after we walloped New England in Foxboro than showed our resiliency in tough wins against the Chargers and Cowboys. But before we could make travel arrangements to Florida, there was one small measuring stick standing in our way in Week 14 of the 2008 regular season.

The Ravens had won three in a row themselves, and seven of their past eight since getting trounced by the Colts in Week 6. The Steelers entered the game 10-3, the Ravens 9-4. The game was played in their house with first place at stake. The week before, a special teams jolt, amazing defense and just enough late offense masked the reality that the offense had played one of its worst games of the year against the Cowboys for the first three quarters. Knowing what we know about Baltimore's defense, this game had the potential to derail the positive momentum the team had built and perhaps rattled that 'whatever it takes' mentality that they had been able to lean on for the second half of the season.

In case you forgot, the Ravens took a 3-0 lead in the 2nd quarter after a long punt return gave them a short field to work with. The Steelers defense though clearly had the Ravens offense and Joe Flacco figured out up until that point.

The Steelers responded with 3 of their own thanks to a beautiful throw by Ben Roethlisberger to TE Heath Miller just in front of the lunging Ray Lewis and the Steelers seemed settled in on offense for the first time all afternoon.

Like Coach Tomlin reminded people of when it was all said and done in Tampa , nothing was easy or pretty all year. That include this particular game. Baltimore responded by embarking on a 15 play drive that yielded another FG to take the lead once more at 6-3. The Steelers defense finally buckled down in the red zone, but it was an impressive drive that signaled the game was likely going to be decided at the wire, regardless of who emerged with the W.

In the third quarter, an incredible punt by Ravens P Sam Koch followed by a Santonio Holmes fumble gave the Ravens another short field to work with. The defense showed its resolve once more, thank in no small part to the job done by Max Starks wrapping up the elusive Ed Reed after he had scooped up 'Tone's fumble. 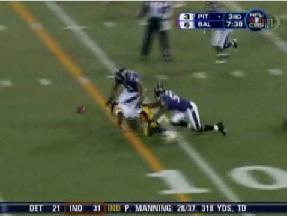 Down 9-3 with about 13:00 minutes remaining on the clock in the fourth quarter, the Steelers offense finally got to work. Willie Parker started things off with a 10 yard run. 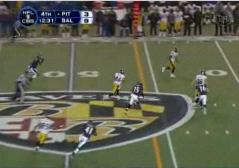 On the very next play, the Steelers were right back in the thick of it after a 30 yard pitch and catch from Ben to Hines Ward took them inside the Ravens 30 yard line. Funny how most of the our big drives are catalyzed by Hines isn't it?

It what shouldn't have come as a surprise at the time, the Steelers drive stalled inside the Baltimore red zone and Jeff Reed was sent in to kick a 30 yard FG. The kick was good and Pittsburgh was within 3 at 9-6 with 9:30 seconds still to go.

Just like they had done in the first half following a Steelers FG, the Ravens responded on ther next possession, taking it all the way from their own 25 down to the Steelers 27 yard line over the course of eight methodical and nerve wracking plays. The 'play making cool and calm' rookie QB Joe Flacco was showing why he had been the recipient of non-stop hyperbolic love from the media up to that point, and Phil Simms was tremendously relieved the NFL's most intimidating unibrow was finally doing something positive in the 2nd half.

With the ball at the 27 and the Ravens facing a 3rd and 8, Cam Cameron and John Harbaugh decided to talk things over with their rookie QB. At the time, I distinctly remember thinking, man, I wish we utilized our timeouts in some of our crucial 3rd down situations. Turns out that timeout might not have been such a good idea in that instance for Baltimore. It gave defensive coordinator Dick LeBeau time to dial up a blitz involving Lawrence Timmons that found him 1 on 1 with Willis McGahee. I've broken this one down into many frames because of the magnitude of the play, and as a reminder of just how talented and explosive Lawrence Timmons is. That word explosive may be used by Jay Bilas when talking about every last college basketball player that can jump higher than he could - i.e. everybody - but for Timmons, the adjective sure does do fit nicely. Let's take a look. 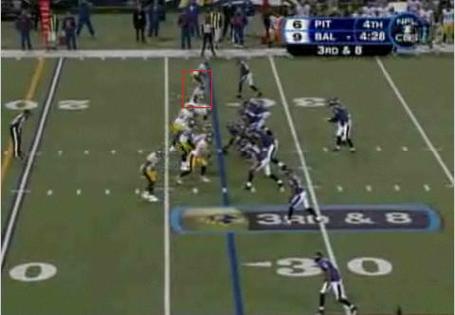 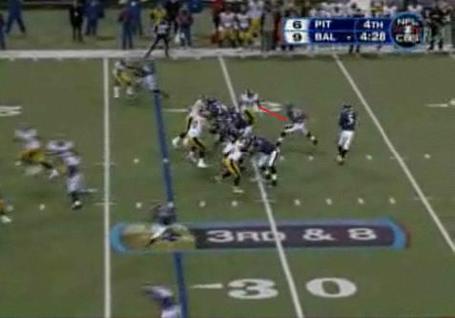 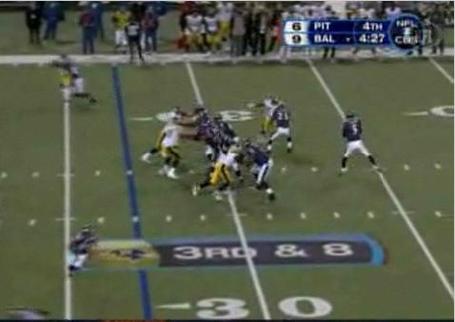 It's hard to really see it, but in frame #3 above, Timmons is kind of giving a hop type juke to McGahee rather than taking him straight on. What McGahee fails to account for though is that when Timmons comes down on his foot, he's going to just explode and take a ridiculously fast and huge first step right by McGahee's outside shoulder and have the upper hand on beating McGahee to the right angle when they do in fact make contact. 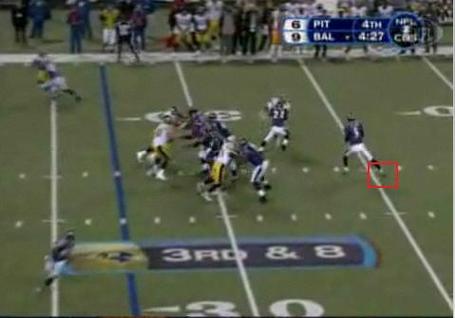 In #4 above, we see Timmons has planted and is about to take that first step. Meanwhile Flacco has planted his back foot himself and is in great shape to throw down the field if Timmons doesn't get there in a hurry. 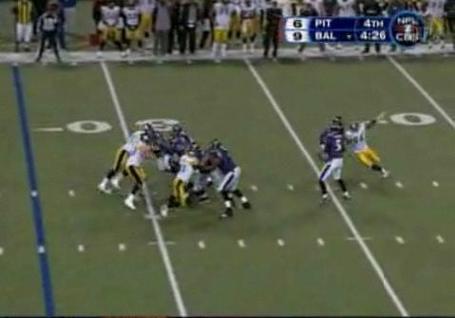 And there's that first step. Pretty crazy athleticis. Still had work to do and thank goodness Flacco made a mistake here and didn't step up even just a step or step and a half in the pocket. 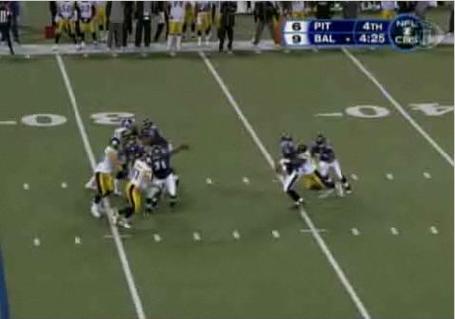 Quite an impressive display of strength here by Timmons too as he finds a way to muster up enough strength to really get a good hit on Flacco despite being off just a split second ago. 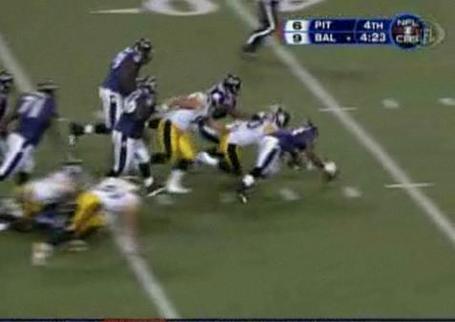 The ball was loose, and though the Ravens' McGahee fell on it, the loss of 14 yards on the play put the Ravens out of Matt Stover FG range. With just over 3 1/2 minutes remaining on the clock and needing a FG to tie it, Ben Roethlisberger and the Steelers offense trouted back on to the field to work some more late game magic.