The Unknown Variable In The Pittsburgh Steelers 2009 Offseason Strategy

Share All sharing options for: The Unknown Variable In The Pittsburgh Steelers 2009 Offseason Strategy

Take a look at the following list of Offensive Tackles that are about to become free agents. That's 38 games worth of starts between Colon, Smith and Starks.

Here's what we know - the Steelers likely aren't re-signing Marvel Smith, unless he's willing to slide way down the pay scale. The more I think about it, it's actually possible given how much time he's missed the past two years and knowing what he knows about how the Steelers do business.

The problem for Smith though is that unlike Alan Faneca, Marvel may not garner much interest from anybody. The NFL is financially healthy, but let's face it. The current economic climate isn't one where anybody's really interested in rolling the dice on a high-price, extremely high-risk investment in any industry, even football.

So it's actually possible that the Steelers could retain him before he even hits the market with a very reasonable incentive laden contract to balance out the risk of Smith's chronic back problem. Smith knows the 'business' side of things well enough and has well into the 8 figures in the bank account. So who knows. And for the team, they're able to possiblly protect themselves from much guaranteed financial exposure with a cleverly constructed contract.

Still, there's no way that the Steelers are resting their hopes of success, not to mention protecting their $100+ million dollar QB with a 30+ year old with chronic back problems.

So that leaves us with Essex, Colon and Starks.

Ok, so that leaves us with Colon and Starks. Kidding actually, as it's possible that Essex has to be kept around as a security blanket if it so happens that Starks and Smith aren't retained.

Being that he's restricted, you can just about bet on Willie Colon being in a Steelers uniform next year. He's too durable, will be affordable, and still young enough where the Steelers will be forced to keep him from a business stand point. At least that's my feeling. That's assuming another team falls in line with what I consider rational behavior and doesn't price us out with a ridiculous offer. My guess is we'll tender Colon a qualifying offer much like we did with Nate Washington last offseason. Perhaps even for basically the same amount of money more or less (~$1.4 million).

Ok, so there's one of our Tackles most likely. 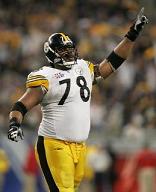 What about Starks then? Depends. Last year nobody really showed much interest in Max.  I'll get into this one more in the coming weeks as well as eagerly anticipate your takes, but the uncertainty that his situation entails is precisely the point of my post.

What to do with Mr. Max?

But really, it goes a layer deeper than Max and by that I mean Tony Hills actually is the critical factor here because the organization will be potentially be forced to  choose up front to make an effort to retain Starks, or head into the draft not knowing what will happen if he's yet to be acquired before free agency ends. Would we then have to potentially overspend yet again on retaining Starks by tagging him for just a year?

I have spoken about this with people before, but I personally think Tony Hills could turn out much better than most think.  First of all, don't lose sight of the fact that he was extremely highly rated to begin with before he broke his leg deep into his junior year. And even more importantly, there really should be no denying his size, particularly his arm length which is vital for the T position.We can all joke OL Coach Larry Zierlein, but here was his first reaction last spring when Hills was drafted when asked about his attributes:

I’ll tell you one thing – he’s really big.  When I went down to work him out, and I’ve seen him, and watched him on tape, I really was surprised at how big he was.  He has long arms.  As a former tight end, he’s a pretty good athlete.  His strength probably needs to develop a little bit, but he is athletic, he’s big, and if you have those two things that’s a good start. 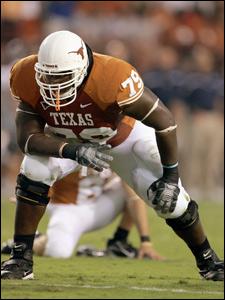 He's big. At least in the areas that matter most for a T (6'6", long enough arms) rather than just a sheer big weight number like the shorter (6'3") more stumpy Colon. He was fairly raw and hadn't had much regular contact last camp in quite some time. Give him a year with the Steelers strength and conditioning coach and let's see what happens to a 24 year old 'underdeveloped' 300 pounder.Strength may be an issue for the time being and more than likely still in 2009, but the unteachable gifts like long arms and a huge frame are there. Period.

He was well on his way to being a 1st or 2nd round draft pick. It's accurate that scouts dinged him for his strength as a right tackle and for his foot speed as a left tackle. But that shouldn't fool you from the fact that talent wise, he was rated near the top of his class as a junior and was named a 1st Team All American despite missing the final few games of the 2006 season.

Bottom line is we won't know until we see him back in pads going up against Deebo and Wood in the spring and summer. No point in speculating endlessly until we hear who the Steelers have selected with their draft picks come April. Instead, let me just ask some basic questions:

1) How easy or hard is it to fall from a Day 1 pick in the National Football League to a 4th or 5th rounder? I'll answer. Very easy. The trend I've been seeing in the last couple of years is teams going the Bill Parcells route - i.e. building from the inside out; from offensive line out to the perimeter. Teams have been reaching BIGtime for offensive linemen in Round 1 as a result of strict adherence to this mindset.

Once more. Eight tackles in Round 1 last year? Are you freakin' kidding me?

Then, the T position seems to get abandoned for a round or two as teams decide that the elite crop is long gone. And as a consequence of all these early picks used on Tackles, there were all these great players from varied positions available in Rounds 2 and 3. Don't believe me? Check out Round 2 and Round 3 of last year's Draft. Notice anything?

Only a small handful of Tackles taken between pick #26 and #130 in the fourth round when Hills finally came off the board.

2) So given that there's this very hard to explain gap between when pick #26 and the next Tackle was taken, is it possible that the 'talent' gap between Duane Brown, Sam Baker, Jeff Otah et al is not nearly as big as their divergent draft statuses might suggest?

3) And is it possible that some of that separation in the first place is an artificial byproduct of NFL teams trying to minimize a dynamic volatile variable like injury concerns in an already unscientific and unformulaic endeavor like the NFL draft?

4) Do the Rooneys and the Steelers army of scouts feast on finding value where others do not?

5) Is Dan Rooney, Kevin Colbert and the other top personnel brass of the organization short sighted?

6) Obviously not so then would it be fair to say that they were 110% aware that Smith, Essex, Starks, and Colon would all be FAs after the 2008 season?

7) Of course. Is is then also possible that Hills got every bit of extra attention that was realistically possible to help him learn the complexities of the game without actually shoving him into the fold on a SB winning team? In other words, was Hills given more attention than say a Trai Essex in preparation for 2009 and beyond perhaps?

To me, the team's decision with regards to Max Starks should tell the story. Free Agency begins on February 27th. Will we even take our chances and just re-sign him, like I suggested could be the case with Marvel in the earlier paragraphs? Is there any animosity between Starks and the organization after what went down last year? Will Starks be willing to seek middle ground before testing the waters? He did after all get to prove himself much more in 2008 and than in 2007 when he only was inserted into the lineup around the Mud Bowl Game half way or so through the season.

If we do not or if Starks refuses to re-sign, will teams jump out of the gate right away and make an offer to him? Or will interest be minimal like last year? If so, the Steelers will have tougher decisions to make in the Draft. If other teams are smart, they'll hold tight and force the Steelers move. We'll get into all the scenarios soon enough, but there's absolutely everything possible in play with Starks, including even the off chance of him being slapped with the franchise tag, something the organization has stayed away from historically. 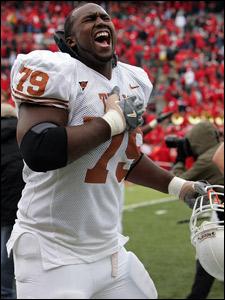 Anyway, it's a complicated situation that we'll do our best to sift through from the sidelines. But let it be known that Tony Hills, our 4th round selection from the University of Texas in last year's draft, is my sub-plot of the offseason and my surprise guy for the team if not this coming year, 2010 for sure. Even if it's just some part-time contributions, good and bad, I think he will be a much bigger part of our immediate future in 2009 than one might think. By the way, before I conclude, UT is not kiddy 'project' land for OL talent in the NFL. I could provide a laundry list of guys who have been churned out of that program along the offensive line. And Hills was highly regarded within that accomplished Longhorns fraternity.

If his leg's healed even more this past year and he's ready to go physically (the knee hasn't bothered him one lick since arriving in Pittsburgh), don't be shocked if the Steelers head into 2009 having Hills be a big part of their either their primary or contingency plans along the offensive line.

PS. He's been around Champions for the past year. And Mike Tomlin. He's good at his job.