IX-  BTSC's favorite Steelers beat reporter, Jim Wexell, has an excellent column published before the Super Bowl on Dick Lebeau and his challenges leading up to the game, he also has a brief recap of SB XLIII.

X- One for the Other Thumb has an amusing post on a few Steeler free agents, also be sure to check out the link to the article about Jeff Reed and his boyfriend, partner, special teams partner and their choreographed dance routine.

XIII- For all the talk of the Steelers special teams improving they still ranked 20th in the NFL in overall special teams.  Hopefully a healthy Daniel Sepulveda, our free agent acquisitions, and possibly our 2009 draft will help sure up the unit.  Also, who knew that Daniel Sepulveda had his own fansite?  I can only assume that the fansite was started by this woman... 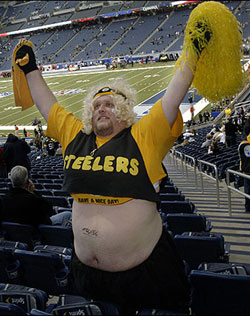 XIV- Two funny posts over at Kissing Suzy Kolber, one is an epic trilogy about a Drunk Cinnicinati Bengals fan in a Chris Henry jersey.  (You can't make this stuff up). They other is Big Ben and Fat Polomalu eating Choco Taco's.

XL- Crank up your speaker's folks...That's right, MP3 of the new hot single sweeping the nation, Stairway to Seven, writen and performed by Rich Banks.  Also for your enjoyment during the song, some old Steeler ladies dancing, presumably to Stairway to Seven. 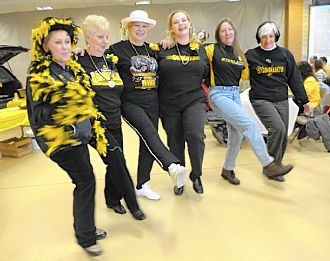 XLIII- The 1995 Pro Bowl was evidently the NFL's attempt to turn the league into Disney Land.  The commentary here by Yahoo's shutdown corner and Pittsburgh sports and miniponies makes me laugh each time I read them.  No further commentary needed.