The following exchange between Santonio Holmes and Hines Ward sums up exactly why I think there's zero doubt that Ward will be in a Steelers uniform until the day he retires. I actually feel we can't afford to lose him as an offensive weapon given our running game and lack of help to compliment Santonio Holmes, but even if we did, he's still too valuable to let go for leadership purposes. Holmes, who could potentially get sidetracked from team goals if put in the wrong situation, will walk the straight and narrow and continue to just work, work, work so long as Hines is pushing him physically, emotionally and mentally.

While waiting for the ruling during the review following Santonio Holmes' epic TD grab, #10 and #86 had the following exchange. 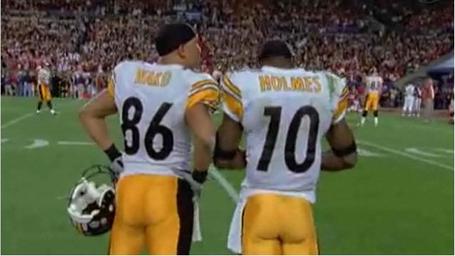 'You keep working hard. You score right here you brought us sixth championship. That's a TD!' 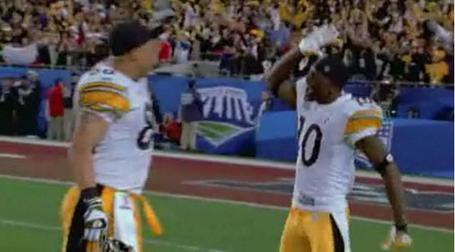 Think Santonio has any respect for Hines? Yes sir? It's just an exchange and I'm sure they view each other as peers and equals not hierarchically, but nevertheless, it's a very telling sequence that shows just what kind of presence Ward has amongst even the most talented and confident of teammates.

Hines Ward. More than just an 80 catch guy and terrific blocker. An extension of the Rooney family, Coach Tomlin and basically the ultimate personification of what it means to be a Steeler.