All Things TE Heath Miller - A Comprehensive Look Back And Forward

Share All sharing options for: All Things TE Heath Miller - A Comprehensive Look Back And Forward

The Pittsburgh Steelers are a much more dangerous offensive football team when QB Ben Roethlisberger is looking TE Heath Miller's way by design more than just a handful of times per game.

Miller set a career high in receptions in 2008, but he average the fewest yards per reception of his career, and for the fourth time in as many years failed to reach the 50 reception plateau. The 3 TDs were also a career low 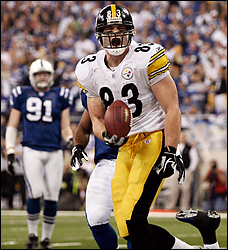 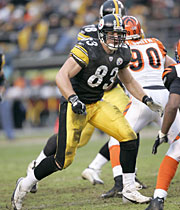 Surprise, surprise --it would have been nice to get Heath the ball more. I really should feel just fine stopping there, as the numbers tell the story. When Ben throws the ball to Heath Miller, good things happen. His catch % is the second highest in the league of anyone thrown the ball more than 50 times. And as measured by DVOA, Miller performed better in 2008 in the situations presented to him better than did the 11 guys who finished 2008 with more receptions. Can I even recommend forcing the ball to him occasionally if that's what it takes?

Heath will be a free agent at the end of the 2009 season, meaning that historically, this would be the offseason that the front office would decide whether or not to re-sign Miller to an extension that would likely make him one of the top 5-7 TEs in the game. How much might that cost? Let's take a look at what some of the more highly paid TEs in the league earned in 2008.

We'll see what happens, but for what it's worth only Dallas Clark and Daniel Graham were not re-signed in the month of August right around the start of training camp. So don't be surprised if it doesn't happen, if it does at all, until after free agency and the draft.

Believe me, I want Heath Miller in the fold in Pittsburgh for his entire career, but if there's tough choices to be made between him and other more pressing positional needs, I will be able to live with a decision to not re-up the talented work-horse out of Virginia. Remember, the Rooney and Colbert drafted Matt Spaeth a few years ago, most likely as a viable contingency plan to fill in for Heath if salary cap considerations forced their hand.