A Season Personified By One Play

Share All sharing options for: A Season Personified By One Play

I made a conscious decision at about the Week 12 mark or so to not lambaste Willie Colon anymore. It might have been the game that Coach Tomlin coined 'Beautiful' - the come from behind late win against Dallas where we got contributions from the special teams, the defense and just enough from the offense at the last minute. Turns out that win came one week after I really felt strongly enough to write that this team was heading to Tampa for Super Bowl XLIII.

When Tomlin made the 'beautiful' remark though, I felt even better about that rare bold prognostication from me. His comment about style points and the beautiful nature of that win against Dallas hammered home an important point to me, making me feel remarkably more and more at ease as the season approached its concluding chapters. That includes when Baltimore threatened late in the AFC title game, and even when Arizona took the lead on an uncharacteristic total meltdown by our defense in the middle of the field.

What I took from Tomlin's statement and from what was becoming more and more evident about this particular collection of players and circumstances was that the team was 'special' in its ability to buckle down and focus when times got tough, never to point fingers, and to always, ALWAYS bust your ass on every last play, regardless of what happened the play before. It's why we saw Coach Tomlin get a bit emotional on the podium tonight while talking about things never being pretty nor easy for this particular team.

Back to Willie Colon. I tried to begin thinking about his contributions and his mistakes - of which there were many -  through the prism of what Coach Tomlin said about this group of players, and what the players themselves had begun to say about each other.  That being the demonstrable presence of a special vibe in the locker room that's hard to identify or explain with words.

We saw this unique and very real chemistry on display during the making of the ESPN Magazine video; and during the week leading up to the Super Bowl on media day; and from LaMarr Woodley's mouth a few weeks ago when he said he's never been on a team that's close like this; and from Dick LeBeau's actions and words late last week when he mentioned the impossibility of him ever making a decision as important as the one he made to return in 2009 without first talking to his players; and finallly, from other corners of the locker room after games later in the year. The evidence is all there.

Willie Colon was a part of that chemistry - a bond that can only be built if every last player is legitimately sacrificing for his teammates and never taking a play off.

So to me, it became a matter of Colon simply not having the raw ability to consistently outclass his competition. It's not a matter of intelligence. And most importantly, his struggles have not been a matter of poor effort. So the luster of ribbing him diminshes considerably for me personally.

Hey, he gets paid to play a game - I don't judge anyone who wants to voice their frustration with his or any other athletes play. And hell, it's sports. Criticizing is part of the fun of being a fan. But for me, when we're talking about maximum effort, there's only so much frustration that needs to be displayed. It's up to the front office to scout talent - something the Steelers have a remarkable track record at doing. It's why we're sporting a sixth Lombardi Trophy, more than any other franchise in the history of the league.

It's up to the coaches and the player to get the most out of said player's abilities. It can be debated if Coach Zierlein has done that or not. But both he and Coach Tomlin deserve a lot of credit for believing in him and any other player who has struggled at times. Willie Colon has improved the past two years. Perhaps his floor was just too low for what we expect from our tackles. But hey, again, the player and coaches can only cook with the ingredients they're given.

We will see if Colon is in the future plans of Mr. Colbert, the Rooneys, Mike Tomlin and his staff but I think it's safe to say that as the future unfolds, Colon will find himself either earning a living in another market, or being pushed to the limit by somebody vying for a starting spot. Either outcome is entirely acceptable. He'll either get his shot elsewhere and make some coin in the process for having started on a Super Bowl winning team. Or he'll remain in Pittsburgh and earn his stripes competing for a job in what you know will remain a tightly run program by Tomlin. Or lose a starting role but remain an extremely valuable and well seasoned backup. It's all gravy really.

But regardless of the outcome of his future here or elsewhere, he deserves a tip of the cap for bringing home this sixth Lombardi Trophy. Just like the rest of his teammates do. There is no such thing as 'winning in spite of' this or that. At least not in Mike Tomlin's house. We should know that by now.

With all that said, I give you one play that exhibits the kind of small contributions that Willie Colon has made this year for our Super Bowl winning Pittsburgh Steelers. The play of course also highlights his struggles, but it's the effort I'd like to point out.

And oh yeah, Ben Roethlisberger - he's good at football and his ridiculous skill set is also on display here. To the pictures: 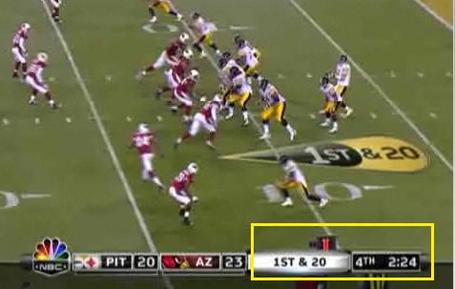 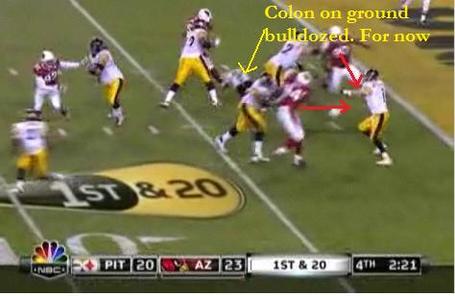 In addition to the annotation about Colon, notice the pressure bearing down on Ben. Now you see him.. 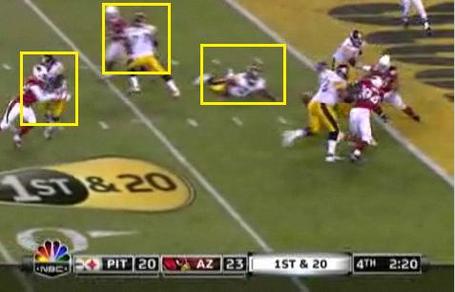 Ben appropriately steps up in to the pocket to avoid the pass rush. Again his instincts correctly tell him that he has a little bit of non-hostile territory in front of him and to not panic.

Notice though that Willie Colon has an option of either staying on the ground or getting up and finding a way to contribute. Also, notice the time in the frame above - 2:20. 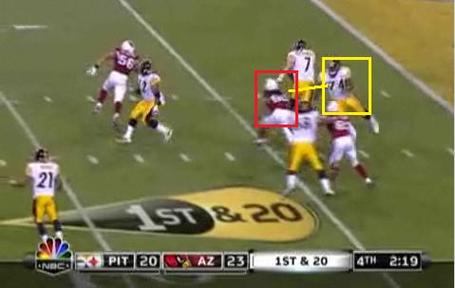 Nice. Good decision Willie. Just one second has ticked off the clock and Colon has gotten that 300+ pound posterior up off the ground and is looking to engage who I believe is Darnell Dockett. Notice that Colon's presence is forcing the Cardinals defender to take a slightly more round about route to Ben rather than a direct line to him. 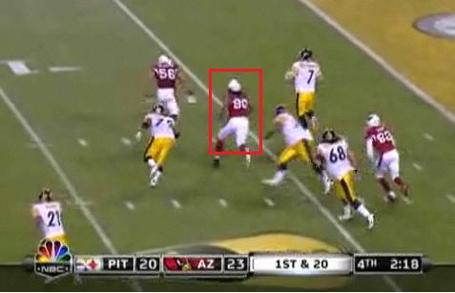 It doesn't really matter that Colon wasn't able to fully engage #90. His mere presence caused a bad angle towards Ben and we see that Roethlisberger now has just the amount of extra time and space he needs to get a clean throw across his body to Holmes for a crucial 14 yards on 1st and 20. 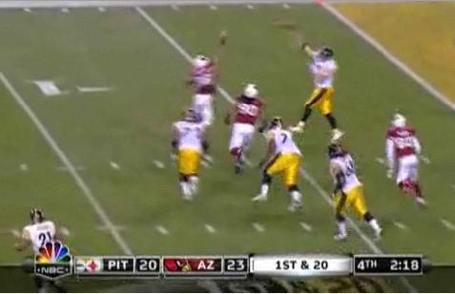 Boom. We're back in business after a terrifyingly bad start to our final drive.

This play demonstrates a lot of things, the least of which are Ben Roethlisberger's once in a generation skills and moxie. It also shows the lightning fast pace that which the game is played in the National Football League. And it shows the resolve of Willie Colon, who probably best personifies the struggles of our offensive line this past two years. Like the team does collectively though, Colon busted his ass and found a way to do whatever it takes to help his team make a play.

Like the season, this play shows it's not how you start but rather how you finish. Ben Roethlisberger, Santonio Holmes, the offensive line, Bruce Arians, et al all were a work in progress several months ago. And a few seconds in to this play, Willie Colon was bulldozed and a liability. One second later, he's on his feet and making sure there was no way a finger could be pointed towards him for not giving maximum effort.

When 54 guys plus a hungry practice squad all have the same mindset, the end is a trip to the podium to accept hardware, something this team's done more times than any other in the history of this great league.