X- The Tribune Review is convinced that Nate Washington is not returning to the Steelers in 2009.  They say there have been no negotiations between the Steelers and Washington's agent.  NYSteelerFan4 has a debate going on in the FanPost Section about this.  Does this point to the Steelers trying to put more emphasis on signing Bryant McFadden; and if they don't sign Washington do the Steelers need to sign another veteran wide receiver?

XIII- James Farrior and Joey Porter decide to tackle the ocean.  James "Deebo" Harrison was scheduled go surfing with them, but the ocean got too scared. 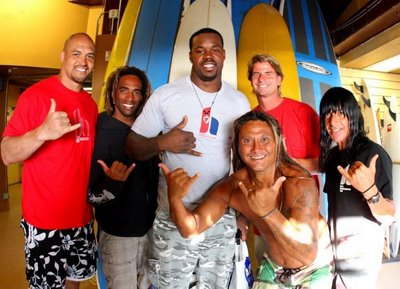 XIV- Kevin Colbert said that our first round draft pick from last year was so far ahead in his rehab from shoulder surgery that he could have returned to the field late last season.  Perhaps Rashard "Delicious" Mendenhall's frustration and lack of visibility with the team was because he was healthy but couldn't play.

XL- Coaches and scouts filled Lucas Oil Stadium in Indianapolis this weekend for the NFL Combine.  The post-gazette thinks the Steelers will consider a first day CB if they can't re-sign Bryant McFadden.  For some excellent insight into the Combine check out our friends at Battle Red Blog; the SB Nation blog about the Houston Texans.  They have a great recap on combine news from Friday, Saturday, and Sunday.

XLIII- The Sporting News takes a look at how teams like the Steelers and Patriots have found players to fit the 3-4 scheme.  Interesting fact: 6 of the 9 past Super Bowl winners have run a 3-4 defense, 5 of those 6 were either the Steelers or Patriots.