IX- Mike Tomlin refuses to say the words "repeat" or "defend".  I don't think he has banned fans or Fanhouse writer JJ Cooper from speculating on what it would take for the Pittsburgh Steelers to repeat in their quest to the stairway to seven.  No big surprises in his article as he suggests we should upgrade the offensive line, and get younger in the trenches.  Yahoo Sports posts another good recap on our overall needs.

X- If you have been watching the combine coverage in the past few days on NFL Network I can't imagine you're happy with the final product that is being displayed.  Instead of seeing the actual player's workout we are subjected to Warren Sapp talking about his dancing skills and how soft everyone is.  Anyways here is a write-up on the winners and losers so far in the combine.  Also another recap of yesterdays combine results from Battle Red Blog.

XIII- The Pittsburgh Steelers rolled out the red carpet yesterday for the premier of their Super Bowl XLIII DVD.  Among those on hand to sign autographs were Hines Ward, Santonio Holmes, and James Harrison.  Steelers Lamar Woodley and Hines Ward are in the Pittsburgh area today signing copies of the new DVD.  Jeff Reed is also at the Sheets in New Alexandria, signing old hair dryers in the second stall. 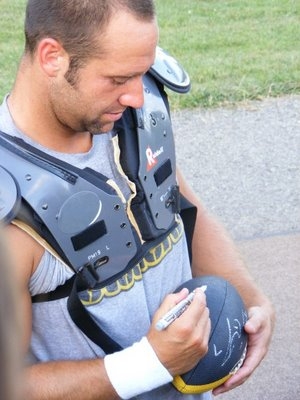 XL- There was an interesting debate going on at BTSC whether the Steelers need to draft a quarterback in the 2009 draft.  I think Dennis Dixon is a great project that will eventually be a competent and valuable back-up.  If Dixon is groomed and shows he can perform, he could eventually be offered as trade bait.  The Texans are about to ship Sage Rosenfels for a fourth round draft pick, if Dixon shows potential perhaps we could grab a 2nd or 3rd round pick a few years from now.

XLIII- Slide Shows are not my thing, but since it's a somewhat slow news day for the Steelers I thought I would share a really nice Super Bowl XLIII Slide Show that showed up in my email.  It is professional looking and helps remind me that I can talk trash until Week 1 of the 2009 season.