X- The Tribune Review is reporting that Kevin Colbert and the Steelers will not be big players in Free Agency this season, and their also not planning on releasing any veterans like Larry Foote.  The end of the article reinforces some of the problems the front office is having with the negotiation of James Harrison's contract.

XIII- Yahoo's Shutdown corner has some more AFC North news about Brown's Defensive Tackle Shaun Rogers.  According to various reports, Shaun Rogers is a big sad mess because Head Coach Eric Managini failed to introduce himself when the two were at the same event.  When did the Cleveland Browns turn into an all girl's middle school? 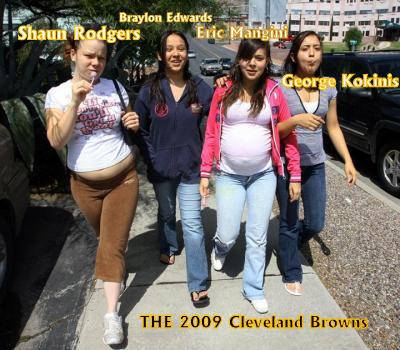 XIV- Santonio Holmes is definitely not getting high today.

XL- One of the top Steelers beat writers Ed Bouchette takes some time out to predict what will happen with the Steeler's Free Agents.  He also gives a great explanation of how restricted free agency (RFA) works and how it will apply to our RFA's like Willie Colon and Anthony Smith.  According to his article is looks very likely that Colon will be back at Right Tackle for the Steelers in 2009, or we will be receiving a first round draft pick from whatever team signs him.

XLIII- Those of you outside of Pittsburgh including me don't get a chance to listen to Steelers coverage on the Radio.  Stillers 365 seem to do a good job going over the news and notes of the day.  Yesterday they spent a segment talking about the possibilities of landing Jeff Saturday.  If you have a chance, listen here.