It ruined the perfect start.

There was rookie WR Limas Sweed, exploiting a slip from CB Corey Ivy in the AFC Championship game, wide open down the left sideline. Roethlisberger's pass was right on the money, and the biggest game ever played against the Hated Ravens was about to be ended right before halftime. 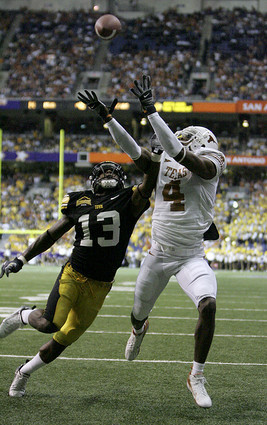 Sweed pulls a Troy Williamson, ball bounces off his hands, incomplete. What's better, he somehow manages to get hurt on the play (injury to his pride, as it was later reported) and burns the Steelers last timeout of the half.

I wasn't happy about the drop, but the lack of awareness in staying down and wasting their last timeout on an incomplete pass sent me into a tizzy.

Steelers coach Mike Tomlin used Sweed the previous week in a blowout win over San Diego, but it was a rare appearance for the rookie from Texas. Sweed's number even got called late against the Chargers, nearly hauling in a tough catch late in the game. It was later said Tomlin called that play because San Diego had been using timeouts on their previous offensive drive, down 35-17. He had the attention of SteelerNation.

Until that drop that cost the Steelers seven points, and the injury that cost them three, Sweed had mostly avoided the negative radar as a rookie. Didn't really do anything to be on the positive radar, but no news is good news when you're 6-foot-4 with great speed.

With the forthcoming departure of Nate Washington (no updates Saturday morning, but last report had him visiting the Titans today), Sweed will be asked to fill a much larger role next year. This shouldn't come as a surprise to Steelers fans, they've been throwing their younger receivers into the fire often in recent years.

Take Washington for example. He was a rookie on the Steelers' Super Bowl XL team, but his second year started with a touchdown reception against Miami in the first week of 2007. He finished the year with a very healthy 624 yards and a ridiculous 17.8 yards per catch average, while bumping Cedrick Wilson out of the No. 3 receiver spot.

But it was the rookie who (no pun intended) blazed past both of them. Santonio Holmes went off for 824 yards and 16.8 yards per catch. His second year saw him chalk up a league-high 18.1 yards per catch and 942 total yards.

Go back as far as Plaxico Burress in 2001 - his second year. He had 66 catches for 1008 yards. Hines Ward had 61 catches and seven touchdowns in his second year. Let's just forget about Troy Edwards. He was never on the team.

Plain and simple, the Steelers expect a lot from young receivers in the No. 2 or No. 3 receiver role.

It's not a leap of assumption to say Sweed is just as talented as Washington, Holmes or Burress. Maybe even Ward. With an offensive line returning all five starters from Super Bowl XLIII, and a lack of commitment to the run in that time, it seems Sweed's in the driver's seat to make fans forget about The Drop of the Year, and think of him more as a redshirt his rookie year.