For longer standing readers and participants here at BTSC, you're well aware of my unwavering support of Santonio Holmes earlier in the year. There were reasons to be a bit underwhelemed and disappointed in Holmes at various points along the way this past regular season. There were some drops; there were no big statistical outburts like the one he came through with in the biggest game of the year on Sunday; and of course, there was the unfortunate run in with the police, a lapse in judgment that made some question if Holmes had what it takes to elevate himself into that #1 type WR threat for this offense this year and in years to come.

Part of the reason I wasn't so concerned was that Holmes is just so talented - more so than Limas Sweed who I also think will be fine in the grand scheme of things. But the other reason is the work ethic, which Hines Ward confirmed in an interview with M&M on ESPN Radio Tuesday morning. 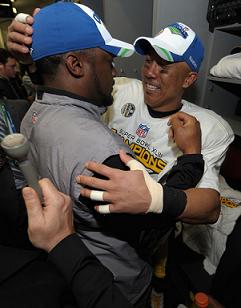 'I couldn't be happier for him. The kid just works his tails off. I know he wanted to have a big year. But I told him, your only as good as your opportunities. Don't really look at your stats. Im not really big on stats. Stats are really for fantasy football players.'

Sounds a little bit like something Coach Mike Tomlin would say, does it not?? Man, imagine that!? What if Hines were interested in coaching somewhere down the road after he hangs up his cleats for the final time in the future. For now, let's just be thrilled that our talented young WR Holmes has Hines around as a player to help him, to believe in him, and to set the bar as high as possible in terms of work ethic. THAT my friends is why Hines is worth his large contract status. Even if his statistical output may not match the contract, he brings out added value in everybody around him. Truly a once in a lifetime player for all the various things he brings to the table.