As is usually the case with dym's contributions, the following is well researched, replete with cool photos, and a good discussion starter, even if there's no right or wrong answer. My take? We're not quite there just yet, as New England's got one more title and a touch more consistency to show off, not to mention a regular season for the ages in 2007. By the time the 2011 season starts though, I don't think there will be much of a discussion personally, as I see Pittsburgh winning one more in the next two years. - Blitz-

After winning a world record 6th Superbowl trophy The Pittsburgh Steelers have become the greatest professional football team in NFL history and possibly the greatest franchise in professional sports.  Mike Florio of The Sporting News also considers us "the team of the century." But next year could also give us another title to add to the mantle, "Team of the Decade". 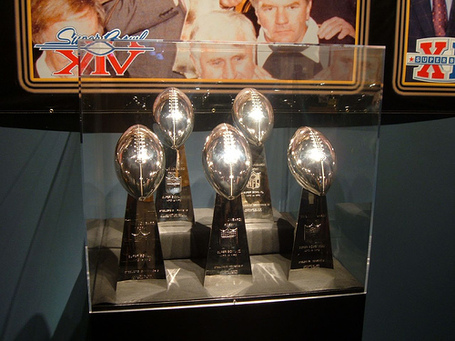 Right now the consensus pick would likely be the New England Patriots, who without a Superbowl win from the Pittsburgh Steelers next year will be assured of this distinction. The Pittsburgh Steelers are the only team other than the Patriots to win multiple Super Bowls in the decade; the New England Patriots have won three Super Bowls in this decade and as all of you are aware the Steelers have only won two.  With one more year left in the decade it still could be possible for our Steelers to be the first franchise to be consider team of the decade in two different decades, the 70’s and the 00’s.

The Packers claim the 1960’s, the Steelers claim the 70’s, the 49ers have the 80’s, and the Cowboys have the 90’s.  If the Steelers are able to win Super Bowl XLIV, I would argue that they deserve to at least be ranked equally with the Patriots during the first decade of the new millennium.

The statistics for the Steelers and Patriots are very similar for the decade that has spanned seasons 2000 to 2008.  In that time period the Steelers have an overall record of 94-49-1, which is a 65.3% winning percentage.  During that same span the Patriots are 102-42, a winning percentage of 70.8%.  In the entire decade so far the Steelers and the Patriots have posted losing records just one time each - Steelers 6-10 in 2003 and Patriots 5-11 record in Bill Belichick’s first season as head coach in 2000.  The Patriots have won 6 division titles in the AFC East, while the Steelers have won 5 division titles; 4 in the AFC North and one in the now defunct AFC Central.  Both teams have qualified for the playoffs a total of 6 times in the first 9 years of this decade. 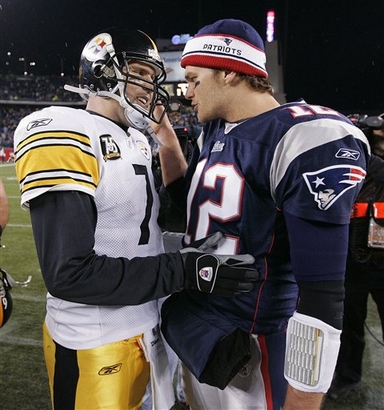 These stats show that right now the Patriots have a leg up on us is just about every statistical category, although with one season left the gap in records and statistics could become much smaller. The Steelers would need to win 8 more games than the Patriots in the 2009 season to match their regular season winning percentage.  With the health of Tom Brady still questionable, an aging defense, and a division with three teams on the rise, this is entirely possible.

There is one intangible in many people’s minds that has already affected and will continue to effect how the Patriot’s "Dynasty" is remembered. SPYGATE.  The infamous videotaping scandal has changed how the Patriots will be remembered forever, it has tainted their legacy and the New England franchise’s three Superbowl wins in the decade will always have an asterisk next to them for many fans of the league.

If Mike Tomlin was making this argument he would say "Pittsburgh Steelers football is 60 minutes long." So, we have one more year to knock off the Patriots as team of the decade.  Having said all this I also realize that this argument is something Mike Tomlin would find incredibly useless, I can hear him saying already, "I walk by Six Lombardi trophies everyday on my way to work, not All decade made up awards."

So what say you BTSC, should the Steelers be the considered the Team of the Decade if we win the Super Bowl next year? 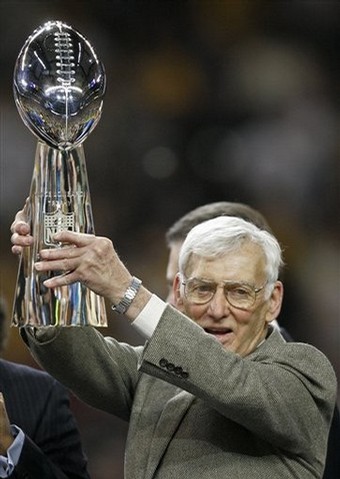