Share All sharing options for: Pittsburgh Steelers 2008 Most Improved Player

Any time you go from a first round exit in the playoffs to a Super Bowl championship the following year, you're likely getting sizable improvements in performance from multiple key players. Usually it starts with the quarterback. In the Steelers case though, Ben Roethlisberger had a just about flawless 2007 regular season. There were a few sub par games, but when when you finish a season with 32 TDs to just 11 INTs, it's typically a whole lot more good than bad.

In 2008 though, Big Ben had his struggles, at least in the early and middle parts of the season. We'll talk about Roethlisberger's stellar play down the stretch and how his ability to limit turnovers spearheaded our Super Bowl run, but for now, I think we can agree that the team's overall improvement in 2008 didn't begin and end with Big Ben's improvement.

So who then might be most responsible for the team's improved play in 2008? In all honesty, Coach Tomlin would probably say such a question is hocus pocus and unworthy of our time - because all the guys laced them up and went 110% each and every week, with both highs and lows delineating their season along the way. I happen to agree, but allow me to name a Most Improved Steelers Player anyway as well as a few other potential deserving candidates before hearing what you have to say.

Most of Woodley's statistical improvement was a mere product of him being on the field a whole lot more in 2008 than he was in 2007. Thank goodness for that. We'll always be thankful for the service of Clark Haggans, particularly for his contributions helping bring home Super Bowl #5 for the Steelers in 2005. But the reality is he was not the type of imposing pass rusher to compliment James Harrison that we needed in 2007, particularly down the stretch when lets got heavy and the competition stiffened. 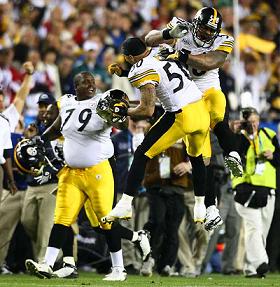 Still, Woodley did more than just show up. He was a beast out there, leaving his mark all over the early part of the 2008 season, as well as down the stretch during the playoffs. He had a little bit of a lull in the later parts of the regular season as he adjusted to playing a full 16 game professional season for the first time - not to mention the fact that referees weren't calling holding on either him or Harrison for what seemed like forever.

Once playoff time came though, Woodley was ready to go thanks to a BYE week in the opening round. Wood recorded at least two sacks in all three playoff games, extending his NFL record of consecutive playoff games with 2+ sacks to 4.

LaMarr Woodley. What a beast. Our defense is going to be so sick next year as he gets even more comfortable in pass coverage, stopping the run, endurance wise and as James Harrison continues to occupy substantial time and energy from opposing coordinators looking to stop Deebo from destroying the QB.

It was because of Woodley that Harrison was able to go hog wild all year. And it was the two of them who helped the team set a new single season sack record for a duo on one team. It allowed Dick LeBeau to spend more capital stopping the pass rather than sending extra pass rushers to hurry the QB. And finally, his enthusiasm out there was contagious, as the team saw itself upgrade from a tired old veteran to a young, hungry pup unable to contain his excitement out there on the field. 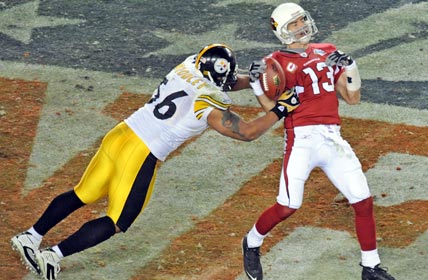 And when we most needed a play - on the very last defensive snap of the season, there was Woodley, with plenty left in the tank. From start to finish, it was a great year for the 2nd year Michigan graduate. If the rest of his career sees itself marked by such remarkable improvement as it did from year one to year two, look out league and say hello Pittsburgh to the next great LB in a long list of legends who have lined up outside and attacked the QB.

Honorable Mention - some of these names may sound too high profile to win such an award, but we're not talking about a prize for the worst player on an elementary school team just to make a kid feel better. We're talking about players who improved their individual performance from a year ago - a season mind you that led to a playoff berth.