IX- Ben Roethlisberger has been nominated for the Boomer Esiason award over at Profootballtalk.com, which is their version of quarterback of the year.  The other two finalists are Kurt Warner and Drew Breese,  as of this posting Big Ben was leading by a considerable margin. I think we should all go and Vote here to give Ben his proper due after playing behind a shaky offensive line with little to no running game last year.

X-   The Steel City Insider gives an outlook on the Wide Receivers available in the upcoming draft and believes that the Steelers will take a receiver at some point in the draft.  I would be really disappointed if the Steelers took another "project" wide receiver, espicially with Dallas Baker and Martin Nance already trying to earn a spot and  combined with the uncertainty surrounding Limas Sweed.

XIII- Here is a nice story from Hugging Harold Reynolds about having lunch with Franco Harris.  The article also sheds some light onto Franco's son who is running for mayor of Pittsburgh.  It sounds like the wheels for "Dok" Harris Jr.'s run for mayor were set in motion a while ago.

XIV- An offensive line scout for the Pittsburgh Steelers visited the Georgia Tech campus to Work out Offensive Tackle Andrew Gardner.  From what I have read he seems like a sturdy role player that might be a decent Right Tackle in the future.

XL- The Steelers have re-signed another on of their own, Andre Frazier, back-up linebacker and special teams contributor has been signed for an additional two years.  He is entering his sixth NFL season.  For those of you who might not remember Frazier was the one who blocked the punt in the Redskins game this season on Monday Night. 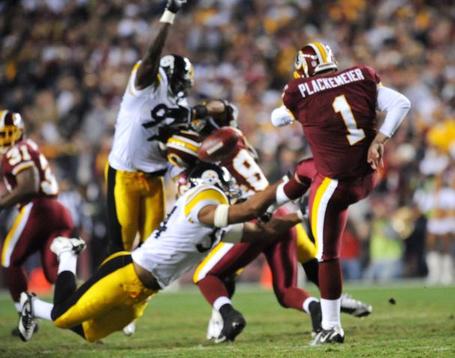 XLIII- One for the Other Thumb does a better job than I ever could making fun of Ray Lewis and his new seven year contract.  Make sure to check it out for the visual proof of Ray Lewis eating babies.