How Good Was The Steelers Defense When Faced With A Short Field?

Share All sharing options for: How Good Was The Steelers Defense When Faced With A Short Field?

Earlier in the week, there was a great post and debate about the greatest single season defense of all time. Naturally, the conversation took its own course and there was lots of interesting information, opinions and insights shared by all. Now, if we were to truly try to dig deeper on which single season performance was the greatest, we'd have to look at more variables than the great WolfPackSteelersFan was able to account for in his already quite lengthy statistical compilation and analysis. One such variable would have to be 'how did the defense do when presented with a short field.' Not all yards and points are created equal after all. Did the defense surrender a fair number of 6+ minute, long and successful drives that wore down our defense and kept our offense pacing nervously on the sidelines for their turn to play? Or did the defense do damange control admirably after either a turnover, a poor punt, a long return from the other team on special teams, etc?

Well, I don't fancy you'll see me doing this for every single defense that we looked at in the previous post, but I have done it for the 2008 Steelers defense. If a week does not appear below, that is because the Steeers defense was not forced to take the field in their own territory that week. You might notice that those weeks were all games where our offense protected the ball soundly. They were also all wins. At the end, we'll tally up some of the results and see if we can come to any conclusions from the data. 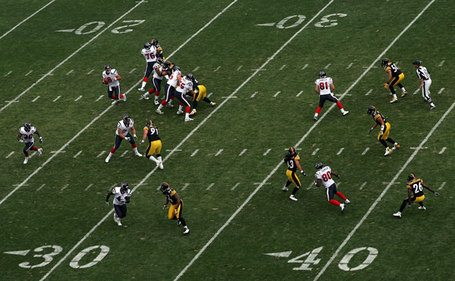 Commentary: I think it was pretty clear that the Steelers came to play in Opening Week of the 2008 season. We weren't going to lose to Houston that day. Nevertheless, that defensive stop by the Steelers midway through the second quarter was big. A 21-7 vs. 21-3 lead was nice, halting any momentum the Texans thought they may have mustered following a Ben Roethlisberger sack and fumble inside Steelers territory. 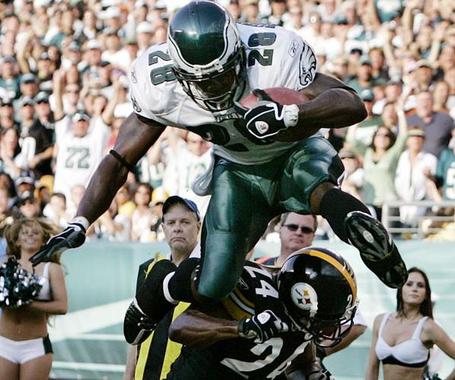 Commentary: Man, I had hoped to not re-visit this one again...ever...but here we are. Part of what was so excruciatingly awful about that game at Lincoln Financial Field was the fact that the defense kept giving the offense opportunity upon opportunity to just make one play, one drive happen. You know, kind of like Ben Roethlisberger and the offense were able to do so frequently the rest of the year. It wasn't meant to be that day. 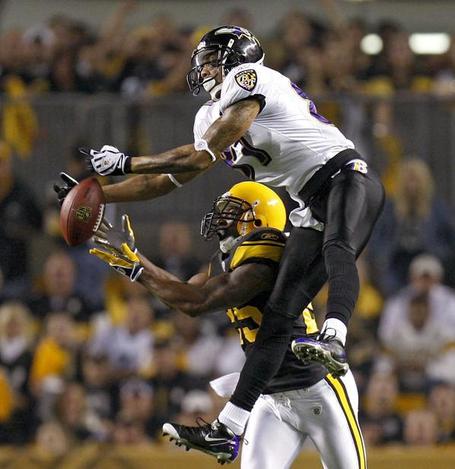 Commentary: This was actually one of Pittsburgh's poorer defensive showings, at least as measured by how they did when taking the field in their own territory. The Ravens TD before the half in particular was disappointing. Baltimore had been winning the field position battle all half long but were only up 6-3 with about 1 1/2 minutes left. A 13-yard pitch and catch from Flacco to Mason got the Ravens rolling, then a 25 yard screen pass to LeRon McClain put them down near the goal line. A few plays later, Baltimore scored a TD, taking a 13-3 into half that they wouldn't be able to hold onto in the second. The Steelers defense came up with the stops they needed to late in the game to improve to 3-1 following the debacle the previous week at Philly. 5 sacks helped quite a bit. The Steelers D though hadn't quite found its footing like they would in the forthcoming weeks. 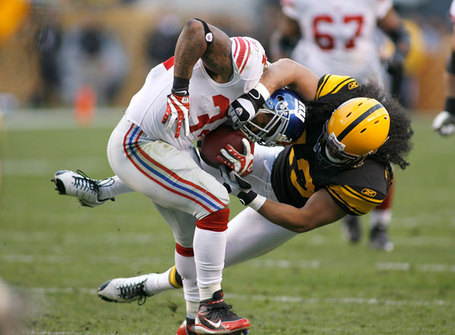 Commentary: I don't know if you remember this game distinctly, but it's the one where the Steelers defense absolutely stoned the Giants along the goal line. Not once, but twice. The first ended an 11 play drive from the Giants. The second kept us well within striking distance, down just 9-7 at intermission. Those stops, albeit eventually in a lost cause, were some of the highlights of the season for me. I remembered blissfully jumping up and down, yelling and high-fiving any one within 20 yards of me. 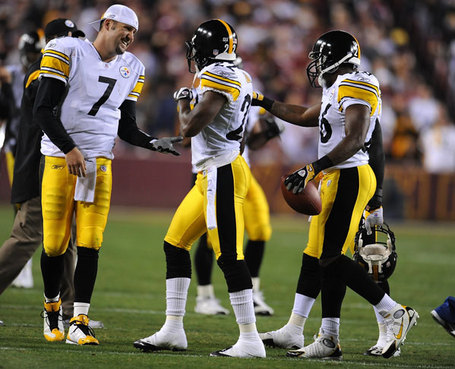 Commentary: A truly dominant performance from the defense. Notice though in that first quarter how many opportunities the Redskins had to take an early advantage. Ben Roethlisberger was clearly not right, and would eventually sit out the second half, but that first half was as ugly as any all year really. For those around the country who weren't aware of LaMarr Woodley prior to this early Novemeber Monday Night Football matchup, they were certainly introduced by game's end. He had two of the Steelers seven sacks on the evening, and for a week at least, the disconcerting late meltdown against the Giants was forgotten. 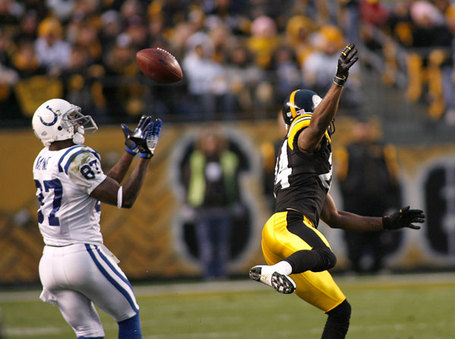 Commentary: You can't give Hall of Fame Quarterbacks short fields with which to work. The Steelers defense got away with it against lesser signal callers for much of the year, but costly turnovers in our own territory gift wrapped a victory for the Colts on an otherwise very solid day from the defense. Prior to Manning's two 4th quarter TD drives, he had been fairly inaccurate all day, with only one fluke tipped completion to Reggie Wayne keeping his stats looking more like a Joe Flacco line than something Manning's accustomed to posting. One of the low points of the season for sure, just two weeks removed from a similarly frustrating defeat against the Giants. 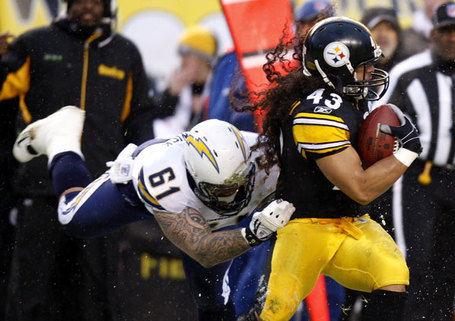 Commentary: Funny what happens when you protect the football. The defense doesn't get put in compromising positions. This was one bizarre game that was painfully tough to watch. The Steelers needed it oh so badly, yet despite getting 300+ yards from Big Ben and 100+ yards from Willie Parker - certainly not a regular occurrence this past year - the Steelers could only muster 3 FGs on the day. One can thank 13 untimely penalties for halting any of the flow our offense was doing its darndest to establish that afternoon. 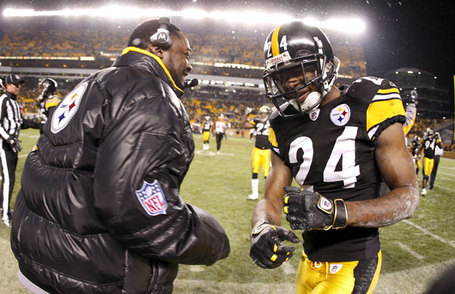 Commentary: In a Thursday night game played in the snow, the Steelers got off to another ho-hum start, falling behind 7-0 to the Ryan Fitzpatrick led Bengals. The Steelers would score the next 20 points though, putting the contest out of reach by the time the last second of the third quarter had struck. Part of that was thanks to the defense not allowing a TD or FG before half when Cincy took over at the Steelers 45 thanks to Limas Sweed having a punt hit him which was recovered by the Bungles. No harm no foul as it turned out and the Steelers won a game they had to win. Not pretty of course, but not much was in 2008. 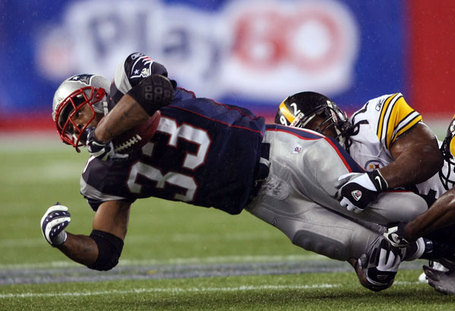 Commentary: The Patriots capitalized on an early Ben Roethlisberger INT to take a 7-0 lead, and all of Steelers Nation was probably muttering to themself, 'oh no, here we go again.' Not so fast. The Steelers absolutely dominated the rest of the game, pummeling Mat Cassell with a healthy dose of James Harrison, with some Wood and Snack thrown in for good measure. 5 sacks, 2 Forced Fumbles, and 2 INTs later, and Pittsburgh was heading home to play Dallas with a 3 game win streak in tow. 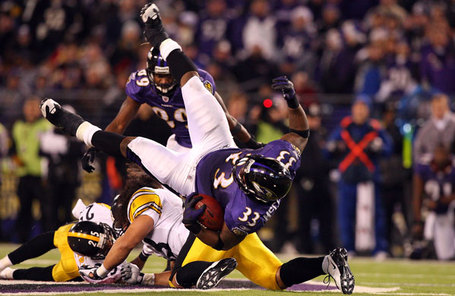 Commentary: A huge performance by the defense on the road, with the division crown at stake. Special teams was the culprit on one of the above fortuitous field position drives for Baltimore, but like they had done since the Indianapolis game really, the defense tightened the screws and kept Baltimore out of the endzone all afternoon. 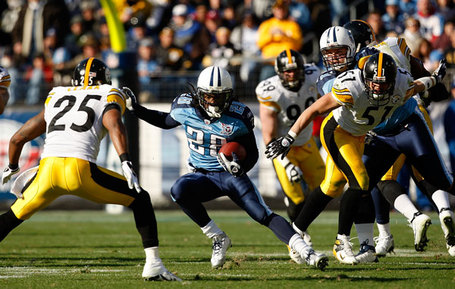 Commentary: Not much went right this week in Nashville. Ben Roethlisberger had a hard time protecting the football, the interior of the offensive line got eaten alive, despite Albert Haynesworth not suiting up for this one. And it didn't help that Kerry Collins played like Joe Montana for most of the game, patiently taking what was given to him underneath and letting his playmakers get yards after the catch. The offense didn't help, and for one of the few times all year, the defense wasn't up to the challenge of bailing them out.

Well, now I'm curious. I want to know what % of the Ravens total points allowed in 2000 came when they began inside their 50 yard line. And I want to know how may total drives they had to face in those circumstances. Obviously it's not necessarily an impressive feat to surrender points, but with as good as NFL kickers are, it just takes one first down really to get them in range and there's 3 points. So if you're faced with a high volume of those situations, you're going to give up points. How many though and more importantly, will it be 3 or 7? And as a follow-up, when not faced with a short field, does the defense really do its best work?

I suspect in Baltimore's case, they faced fewer such drives in 2000. I also suspect that their % of drives that yielded points will be similar, and that the % of the season's points allowed will be a decent amount lower. Why? Well, I'm guessing that Ravens offense turned the ball over less frequently than did the 2008 Steelers offense. They had Trent 'Game Manager' Dilfer playing QB. I don't recall his actual statistical output that year, but if we take the campfire stories about Dilfer's impeccable decision making to be true, than he surely had far fewer INTs and fumbles than Roethlisbeger did last year. Which all means the Ravens defense was likely in fewer such situations than was the Pittsburgh Steelers 2008 defense.

Color me curious. For now, my hunch is that we should be even more impressed by this year's defense regardless of how my opinion may or may not have changed after reading and participating in the debate about the greatest defense ever earlier in the week. Had this year's defense not been given a short field to defend 26 times in 11 games, I imagine that our points per game would have been even more impressive - closer to 12.5 per game than 13.9.

Cheers to Dick LeBeau returning in 2009 to participate in his 51st year as either a player or coach in the National Football League. There have been many great ones for him over the year, but perhaps none was more impressive than the defensive season turned in by the defense he masterminded and directed in 2008.