Onward we go with the BTSC 2009 Community Mock Draft. The third pick comes compliments of gimpsta7 who's definitely one of the more active draftniks we've got this offseason. Many thanks to him for the timely and interesting pick, as well as for the detailed information provided below. A nice high bar set by him, regardless of what one thinks of the pick. Up next?The Seattle Seahawks, represented by vherub. Happy Saturday all. 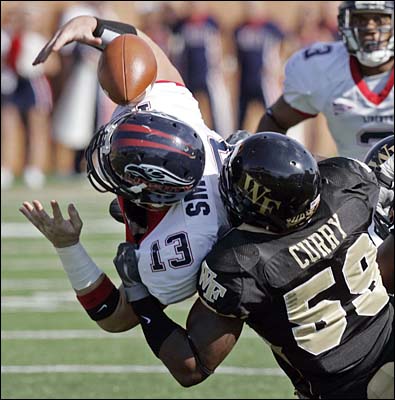 The Chiefs are in desperate need of a leader at the linebacker position.  This has always been one of their greatest weaknesses as well as a position they have failed to fill (see Kendrell Bell).  Aaron Curry will end that streak of ineptitude by giving the Chiefs the number 1 defensive player on the board.  New GM Scott Pioli loves these quick, versatile players and wouldn't pass on a chance at Curry (this year's Jerod Mayo).  Before the Cassel trade, Stafford would have been an easy pick for the Chiefs, but now, missing number 34 overall, this pick will set the tone of their entire draft.  Mike Vrabel and Aaron Curry will give Kansas City their best LB corps in a long time.

There's more after the jump.

Aaron Curry is 6'2", 254 pounds and lightning quick, running an exceptional 4.56 40 yds at the combine.  Curry is considered by scouts to have some of the best intangibles - instincts and aggression - of any LB prospect the last decade.  Though not a great tackler, he doesn't miss the easy man, and is a fierce hitter, much like a roaming safety.  He can play any linebacker position, but excels off the edge rushing, and from what I have seen is a lot like our own Mr. Woodley.  Exceptional fish move and power rushing that allows him to shed blockers with ease, and will make him one of the better blitzers in the league.  Scouts say he has the speed and quickness to cover sideline to sideline on any play, and this will allow him to be a run stopper as well as a pass rusher.  He was a captain and team leader at Wake Forest, and never missed a game in college due to injury.  Won this year's Butkus Award as the nation's top LB.

Due to his physical gifts, Curry has been known to over-pursue targets and whiff.  He surprisingly lacks the ability to swiftly change directions, but his speed can help him recover.  Quick learner, but his current pass-rushing skills are limited.  Sticks to the same 2 or 3 moves, and has been caught by elite tackles.  Poor coverage linebacker, but that can be covered up in the Chief's system with Vrabel who excels at coverage.