The BTSC 2009 Community Mock Draft is gathering some steam, with the fourth pick submitted compliments of vherub. He and Steeler Mike come to mind as two of BTSC's longest standing draft afficionados (you twisted, twisted souls), coming up with good stuff for discussions about both the Steelers situation each draft, as well as the needs and potential solutions for other teams around the league. I enjoyed his write up for the Seahawks' selection at #4 not suprisingly. Many thanks! Up next: The Cleveland Browns, represented by a soul who knows a thing or two about the organization - maryrose. -Blitz- 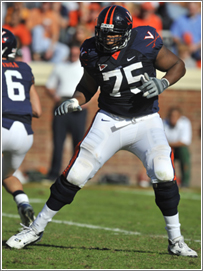 While the Seahawks haven't always been competitive, the NFC version of the team has. In the last five drafts, Seattle has had first round picks no lower than 23. So it is a little unusual to see them with the number four overall- even if it wasn't that long ago when "playoff drought" meant the 'Hawks (now people probably think of the Pirates, sigh).

Talking heads had Seattle leaning towards a WR (Crabtree) or a replacement for Peterson (Curry). With Housh recently signed, Crabtree isn't as critical to draft. And they still have Branch who they gave a 1st round pick for two years ago, as well as Nate Burleson, Koren Robinson, etc. But Crabtree and Curry are gone.

Some teams see a top 5 pick as a chance to get a franchise QB. And with Stafford still on the board, there is a strong indication Seattle picks him. Less than a month ago, Team President Tim Ruskell remarked "[W]e’re in that zone where we have to consider [a quarterback] every time there’s a free agency period, a draft" And he did personally attend Stafford's workout.

But nobody is writing off Hasselbeck yet, he's 33 and signed through 2010 (as is backup Seneca Wallace). Wallace isn't the future QB of this team, anymore than Batch was for the Steelers. Hasselbeck missed much of last season due to back injury, and the team suffered one of it's worst seasons in part because of that. But as long as Hasselbeck has recovered, this guy is an underrated, and yet effective QB who has led the Seahawks to numerous winning seasons and division titles.

Since coming to Seattle in one of those great, forgotten, one-sided trades in 2001 (Matt and Green Bay's 17th pick-used to draft Hutchinson for Seattle's 10th pick- Jamal Reynolds and 3rd rounder-Torrence Marshall), the Seahawks have been the dominant team in the NFC West. But he was also Holmgreen's QB and this is Mora's team now. Still, selecting a QB at 4 effectively destroys the team's relationship with Hasselbeck, and at the same time undermines the recent signing of Housh. TJ is 31, and will be 32 once football starts back up. His signing indicates Seattle's desire to win now, they are not rebuilding, and aside from last year, when injuries decimated the team, are built to compete in the present. Stafford is an interesting pick, but I'd think he would be worth more to trade out of the spot, than he would be for the Hawks to sit on for 1-2 years. During which time, if recent history is any indication, it will be a messy and delicate situation dealing with two franchise QBs. As much as Mora may or may not want his own QB, the Broncos mess loudly shouts warning.

Which finally leads to the actual selection, Eugene Monroe. I am surprised he is still on the board, perhaps the swirling stories about knee injuries have dragged him down. Those worries seem designed more to allow later teams, like the Bengals, to get a crack at him. The Seahawks would put due diligence in, and unless more information surfaces, I don't see this as a strike against him. 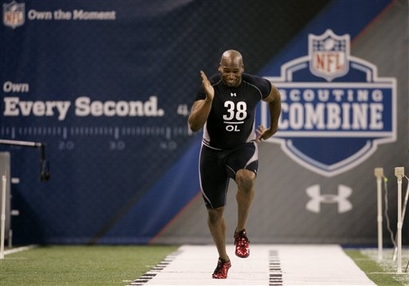 What I do see is the greatness of Walter Jones finally wearing down, and the need for another LT to take his place for years to come. The Seattle running game was weak last year (and while I don't know if the current running backs are ideal), much of that weakness arose from the offensive line. Mora has stated he wishes to re-establish the run. The Seahawks have resigned Ray Willis, but he has lined up at RT and G and was signed to solidify depth what with Floyd Womack going over to the Browns. Returning to Jones, at 35 and coming off micro-fracture surgery, his playing days are on the decline. Locklear isn't the heir to Jones, though he is a stable presence. Monroe is strong all-around, and his run-blocking skills are especially praised.

Eugene also was the reason Branden Albert played G instead of LT in college. This is no guarantee of anything, but that is a strong sign that Monroe can play at an elite level and be able to step in his 1st season if needed. And D'Brickashaw Ferguson's play in the NFL gives further weight to Virginia's program. He also has good moral fiber, which Ruskell pays more stock in than others. He is a hard worker and during his junior year (when he would line up against Chris Long in practice every day) he didn't allow a sack during the regular season. I think OT is a pick the fanbase can support and while I certainly hope Walter gives the team another year, it is increasingly doubtful he can perform for an entire year and beyond at his Hall Of Fame level.