IX- Blitzburgh's interview with Jim Wexell this morning teased an article with Mike Tomlin in today's Post Gazette.  It is amazing to think that Tomlin is younger than some of his players but has the maturity and wisdom of a much older soul.  The interview also spawned another Tomlinism:

"Hungry is a word that I've been analyzing here of late. It's not hunger that drives me, it's not hunger that needs to drive our football team. Hunger and thirst are things that can be quenched. We have to be a driven group, we have to seek greatness. I think driven is a more appropriate word, it's a word I tend to use with them as we prepare for '09." 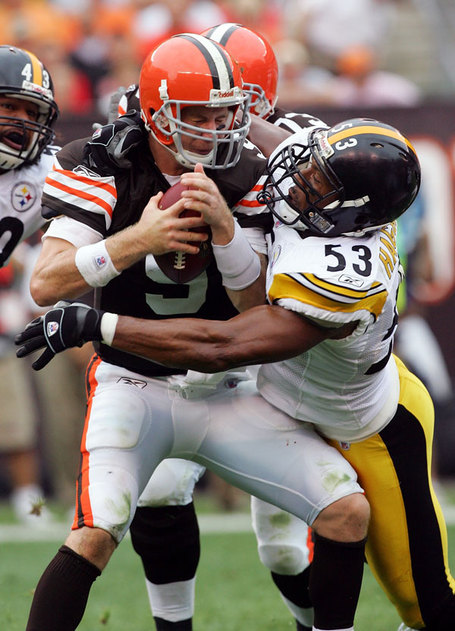 XIII- Speaking of week one; Raven's fans and Steelers fans have been going back and forth about the Ravens requesting not to play the Steelers at Heinz field all week, but it looks like the other 31 teams should request not to play the against the Steelers in a prime time opener.

XIV- NFL players who are paid a significantly lower salary than their playing time are sometimes awarded a bonus during the offseason meetings.  Willie Colon and Darnell Stapleton were both awarded bonuses today that were among the highest paid out this off-season.  The money comes from a fund set up in 2002 to help compensate players who are considered underpaid.

XL- Lots of talk has been going on about the new "Hines Ward Rule" in the national and local media.  Multiple sources are confirming that the rule passed along with three other rules including  a new rule limiting only two blockers to a form a wedge on kickoffs.  Watch this video a few more times as it will be the last time you will see it's greatness in the NFL.

XLIII- Steeler Fury has an interesting break down of the recently signed contract of Chris Kemoeatu.  According to his numbers the contract is very friendly to the Steelers after the 2009 season and beyond.  It looks like another smart decision by our consistently excellent and financially prudent front office.